Home EntertainmentGossips Erica Fernandes slays in a chic outfit as she enjoys lunch date with her girl gang; SEE PICS

Erica Fernandes slays in a chic outfit as she enjoys lunch date with her girl gang; SEE PICS 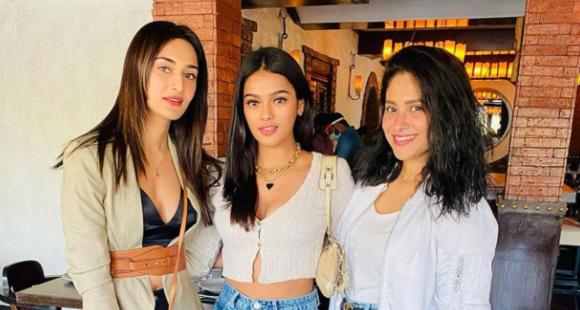 Erica Fernandes slays in a chic outfit as she enjoys lunch date with her girl gang; SEE PICS

Erica Fernandes, popularly known as Prerna from Kasautii Zindagii Kay, has gained fame because of her acting. The actress has time and again proved that she is the queen of the television industry. This year, Erica has also gifted herself a new home and shared the pictures with her fans. The actress is seen spending her day with her friends and former co-actors Sonyaa Ayodhya and Shubhaavi Choksey. She always shares pictures with them. The trio also celebrated Christmas together in Erica’s new home.

And this time Erica, Sonyaa Ayodhya and Shubhaavi Choksey were seen enjoying a lunch date. Erica rocked a chic outfit and was looking stunning. She wore a short coat with black shorts and a crop top which goes well with her cosy stockings. She complemented the look with a sling bag. While Sonyaa Ayodhya was seen wearing a white crop top with flared jeans, Shubhaavi Choksey kept it simple by wearing a white shirt and jeans. All three looked beautiful as they stepped out for a lunch date. Erica shared the picture on her Instagram and captioned it, “Lunch with my girl gang. #girlgang #ericafernandes #sonya #shubhaavi #mad3.”

Erica also shared a glimpse of her food which they had during lunch. Fans also showered love on the picture.

Meanwhile, Erica was last seen in a music video Maula with Rohman Shawl. The track has received a good response from the audience. The song beautifully captures the emotional journey of a girl who lost her man. She gets married to someone else but finds it difficult to move on from her past.