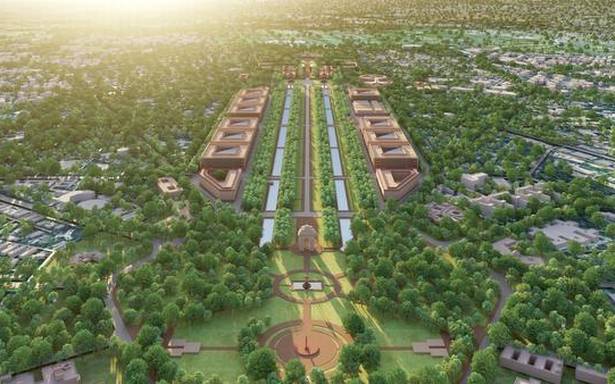 The government’s latest proposal for the redevelopment of Central Vista before an expert panel of the Ministry of Environment and Forest dropped the proposed new Prime Minister’s Office from the plan, while revising the estimated cost from ₹11,794 crore to ₹13,450 crore.

The Central Public Works Department’s proposal for terms of reference, which is a step before the application for environment clearance, was discussed by the MoEF Expert Appraisal Committee on Thursday, according to sources. A source said the CPWD was given suggestions and asked to address the issues raised in representations from the public.

The CPWD on December 9 submitted a proposal for TOR for the “development/redevelopment of Common Central Secretariat buildings and Central Conference Centre along with Prime Minister’s Residence, SPG Building and Vice President’s Enclave,” with a total built-up area of 17,21,500 square metre and demolition of 4,58,820 sqm. This plan did not include the proposed PMO that was mentioned in an earlier version of the proposal submitted in November. The source said there were issues of pending land-use change and litigation.

The CPWD had first submitted a plan for the 10 secretariat buildings and conference centre and the TOR which was approved in October. Then, the CPWD applied for amending the TOR to include the PMO, PM’s residence, SPG building and V-P’s Enclave, but the EAC in its meeting on November 25 returned the proposal. The EAC asked the agency to “refrain from piecemeal approach” and apply again with an “integrated approach,” according to the minutes of the meeting.

Among those who submitted their representations to the EAC was former MoEF secretary Meena Gupta, a retired IAS officer. Ms. Gupta wrote to the chairperson of the EAC, T. Haque, that the CPWD had “once again arbitrarily added and subtracted components of the Central Vista redevelopment and this completely undermines the directions of the EAC given during the last meeting.” She added that there was no explanation given for removing the PMO from the plan and other components, including the new Parliament, the New India Garden and underground transit system had not been included.

Ms. Gupta told The Hindu that the approach had been “slipshod” and “piecemeal”. “Such an important project should not be taken up like this,” she said.

The EAC had approved the CPWD’s proposal to construct a new Parliament in April. As a part of the government’s larger plan to redevelop the 3-km-long Central Vista from Rashtrapati Bhavan till India Gate, construction on the new Parliament was set to start this month. The government, however, submitted an affidavit in the Supreme Court earlier this month that it would not start construction, demolition and tree transplantation till the court gives its decisions in cases challenging the project.