Europe’s coronavirus crisis is resurging. For months, 3 Nordic nations kept it under control — without lockdowns 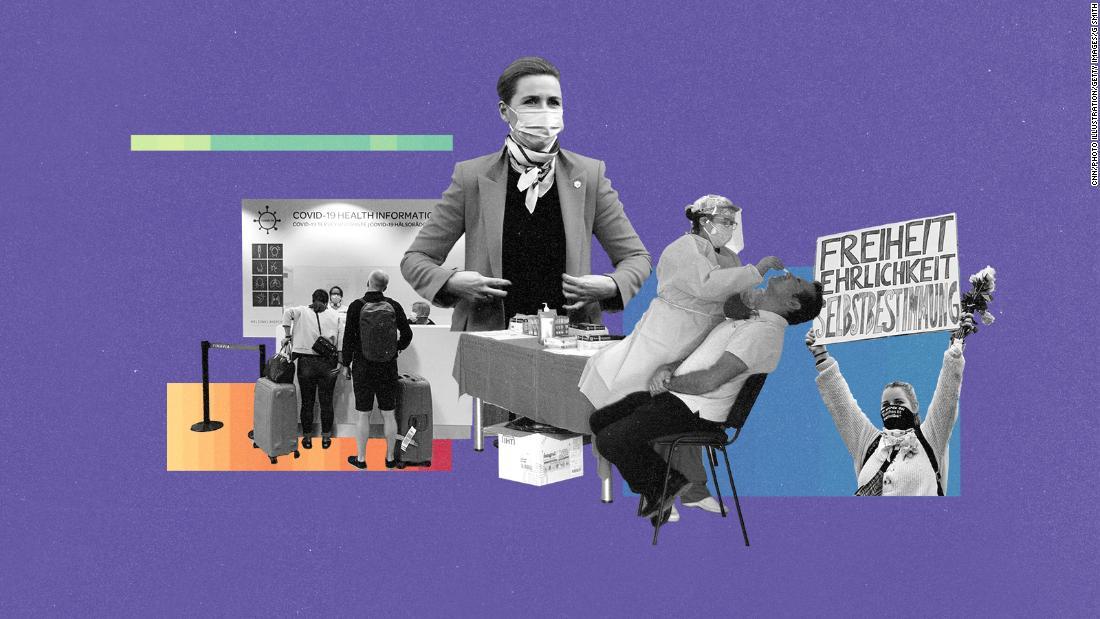 Politicians are desperate to find a balance of restrictions that flatten the curve without flattening the economy or upsetting residents who are eager to reunite for the holidays.

“The key question now is to determine what is the optimal package of policies to maximize the health benefit at least cost,” said Thomas Hale, an associate professor of public policy at the University of Oxford. “However, this ‘magic formula’ will likely differ across different countries and populations, and of course over time as the virus surges or recedes.”

It’s a complicated and ever-changing calculus, and every country is different.

But the approaches of three nations — Finland, Norway and Denmark — in recent months stand out, a CNN analysis shows. The analysis, which looked at data from the University of Oxford and Johns Hopkins University, found that while all three countries implemented some of the continent’s most relaxed combinations of restrictions, they still managed to keep average daily deaths low — below one per million — for the three-month period between September 1 and November 30.

Denmark success may be ending. In late November, Danish death rates exceeded one per million for the first time since May, Johns Hopkins data shows. On Friday, the number of newly reported cases topped 4,000. Earlier in the week, officials expanded restrictions and announced a nationwide lockdown aimed at tamping down rising infections.

But what led to the three nations’ success in the fall?

Denmark, Finland and Norway responded quickly to the slightest increase in infections, which allowed them to almost eradicate the virus during the summer and face the autumn from a stronger place, according to interviews with six scholars. Clear guidance and residents’ willingness to follow it was also key, the experts said. And ramping up testing and contact-tracing capacities and providing paid sick leave helped to keep any outbreaks localized.

How to be the best (or how to be Finland)

Finland had Europe’s lowest average of infections and deaths per capita in recent months, Johns Hopkins data shows. It managed to contain local outbreaks while sticking to some of the most relaxed restrictions on the continent. Internal movement was not restricted, those who needed to could attend school and workplaces in person, and mask-wearing was not mandatory.

“There is nothing magical about doing this — we just have a pragmatic approach,” said Pekka Nuorti, an epidemiology professor at Tampere University who has worked for public health agencies for more than 25 years.

Cultural, political and geographic factors — such as low population density, less travel and high trust in government — were helpful, Nuorti said, but it was the work of the country’s health agencies that made a difference.

The average daily testing volume nearly quadrupled from 2,900 samples in May to 11,300 in August, health ministry data shows. In late November, Finnish laboratories performed up to 23,000 tests a day, or 90% of the current capacity.

Finland used the summer to prepare for the new wave by responding with preventative measures instead of a lockdown, said Mika Salminen, director of health security at the Finnish Institute for Health and Welfare. Restricting international travel for most of the summer added to Finland’s success in the fall, he said.

To help people isolate and stay home, the government provided economic support. Thousands of people who were exposed could quarantine because the government offered compensation for their lost income, Salminen said.

“It’s not that we haven’t had outbreaks,” Nuorti said. Finland had local flare-ups and super spreader events, but local health authorities, coordinated by the central government, were able to contain them using real-time data, he said. But as case numbers rise, it becomes increasingly difficult to identify all transmission sources, Nuorti said.

If the situation deteriorates, Salminen said, a full lockdown has not been ruled out.

Across the border, Norwegian officials increased their focus on addressing the most vulnerable.

Norway’s spring lockdown was the strictest in Scandinavia. The country’s oil and gas industry was able to provide a large economic buffer to soften the effect on people’s purses, but the government soon faced a growing mental health crisis and officials shifted relaxed their restrictions.

Also, in late summer, health authorities found that roughly 40% of Covid-19 cases reported in July were among Norway’s foreign-born population. To adjust its communication strategy, the government committed about $770,000 to fund a Covid-19 awareness campaign for the country’s immigrant population. These targeted interventions appeared to contribute to a notable drop in infection rates among those communities, said Jonathan Tritter, a professor of sociology and policy at Aston University.

Knowing what to do, doing what you’re told

Three experts interviewed by CNN said a critical factor in Denmark’s early success was clear and coherent messaging about risks and the need for behavioral changes. They attributed the country’s achievement to its history of mutual trust between residents and the government.

“The government was able to activate that background of trust, the good default position, with effective communication,” said Michael Bang Petersen, a political psychology professor at Aarhus University who runs the HOPE project, a research study examining how people and governments are coping with the pandemic.

Petersen said two factors determine whether people behave to avoid infection. One is motivation: Whether they are worried about becoming infected. The other is whether they know exactly what to do to prevent spreading the disease, which hinges on communication from health authorities and politicians, Petersen said.

One of the officials leading the Danish pandemic response echoed that point.

“Handling a pandemic is all about human behavior,” said Søren Brostrøm, general director of the Danish Health Authority.

Human behavior helps diseases spread, and controlling it is where solutions lie, Brostrøm said. Physical distancing, not a drug or vaccine, is the “medical magic bullet” everyone is hoping for, he said.

Brostøm spoke to CNN prior to Denmark’s recent surge in cases. But at a press conference on Wednesday, Prime Minister Mette Frederiksen addressed the country’s worsening situation.

“In the end, only one thing works against corona,” Frederiksen said. “That is if you and I and we all take responsibility for ourselves and for each other.”

Multiple studies have concluded that lockdowns work. At Oxford’s Blavatnik School of Government, scientists developed what they called a Stringency Index. The index rates about 180 countries and territories based on their restrictions, such as school closures and stay-at-home orders, on a scale of one to 100. Higher scores represent more stringent restrictions.
In a preprint study posted in July, the Oxford researchers found that in the spring, higher scores on their scale were associated with slower growth of daily deaths. On average, they found, a week’s delay in reaching medium stringency led to almost twice as many new deaths over the months that followed.

Constant social distancing is not sustainable in the long run, Brostrøm said. A country needs just enough restrictions to be able to control the pandemic.

“I think we found we actually struck quite a good balance in this country in this regard,” he said.

Even in Denmark, one misstep can have a detrimental effect on trust and then compliance, experts said.

A government decision to cull the country’s farmed mink over fears the animals could spread the coronavirus to humans is one example. After ordering the cull, officials realized they did not have the legal authority to do so and rolled back the mandate.

“Right now, we are seeing an increased polarization. We’re seeing decreased support of the government strategy. And the question that is facing us here in Denmark is, ‘What will be the consequences of that for the pandemic over the next months?'” Petersen said.

Danish officials’ willingness to impose stricter measures when necessary stands in contrast to Sweden, where officials first took a lighter hand to try and stem the pandemic.

“There was a greater emphasis on voluntary measures, and without the extreme ‘shutdown’ measures put in place in Denmark (in the spring),” said Rowland Kao, a veterinary epidemiology professor at the University of Edinburgh.

“Other Nordic countries are much more in line with the rest of Europe,” Kao said. “They had a stricter lockdown in spring and did it sooner.”

Kao said this approach made Sweden’s uptick of cases in June, when most other European countries were recovering, inevitable. And in November, despite having a higher average stringency score than other Scandinavian countries, Sweden was struck by a nationwide outbreak.

Addressing his nation in late November, Prime Minister Stefan Löfven appeared to blame the resurgence, in part, on Swedes’ failure to follow government guidance in the autumn.

“When Covid-19 arrived in our country, we all agreed to take responsibility,” Löfven said. “This autumn, too many of us have neglected to follow the advice and recommendations.”

When it comes to a disease that spreads so fast, Kao, the Edinburgh professor, said very small differences in how things are done can make all the difference in the world.

How CNN reported this story

For this story, we sought to examine the relationship between government restrictions and Covid-19 deaths during the period between September 1 and November 30, when many countries were in the throes of a resurgence.

To do so, we analyzed data from Johns Hopkins University to calculate the daily new deaths per million residents in 31 European countries. We used a moving average to account for variations in the data caused, for example, by delays in reporting on weekends, or changes in data collection methods that would otherwise result in a sudden spike in daily figures. We used new deaths instead of new cases because the reporting criteria for deaths is more consistent across countries than for cases, which is in part a function of testing volume.

We then plotted the new death rates against each country’s stringency score, which we found using Oxford University’s Stringency Index. The index scores countries’ Covid-19 response measures on a scale of one to 100.

We analyzed the 27 European Union members, the United Kingdom and free trade countries (Iceland, Liechtenstein, Norway and Switzerland). We excluded Liechtenstein because stringency scores for that country were not available.

Following interviews with experts, we defined countries with low infection rates as those with one or fewer death per million residents. We defined less restrictive countries as those with stringency scores below 60 because it was roughly the minimum score for countries with full lockdowns in October and November according to data we compiled on European countries’ lockdown status at that time.

We focused on Finland, Norway and Denmark because those were the only countries to consistently maintain low death rates (one per million or less) and stringency scores below 60 during the September 1 to November 30 period. Other countries also maintained low death rates, but we did not focus on them because they either implemented a strict lockdown (Ireland) or had a high stringency score (Cyprus).