Home General Even after border reopens, truckers stuck at British ports scuffle with the police.

Even after border reopens, truckers stuck at British ports scuffle with the police. 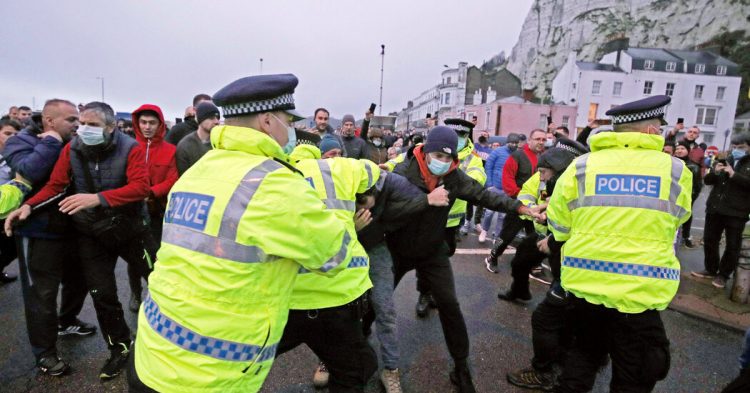 After blocking freight traffic from Britain in an attempt to stop the spread of a possibly more contagious variant of the coronavirus, France reopened its border on Wednesday to truck transport.

The action was contingent on virus testing, and the British Army was dispatched Wednesday morning to help in the laborious process administering tests to scores of truck drivers who were left stranded outside British ports when the borders closed.

But in the early morning hours, with traffic largely at a standstill, there was more frustration and confusion for the hundreds of drivers who have spent days sleeping in their rigs, with no way of knowing whether they would make it home for Christmas. As tensions boiled over police officers and angry drivers faced off, and news networks captured scenes of pushing and shoving as desperation for movement deepened.

There was concern that the early morning chaos could be a prelude for the logistical nightmare to come, with the Road Haulage Association warning that even “a short delay in the process is going to mean huge delays in the supply chain.”

Under the agreement with France, rapid tests with “lateral flow devices” will be administered by workers from the National Health Service with the military providing logistical assistance.

The tests, which were developed by Public Health England and the University of Oxford, are a relatively new weapon in the fight against the virus.

They can detect the new variant and give a result in about 30 minutes, according to Public Health England.

Freight drivers will receive their test result by a text message, which then gives them the right to cross the Channel. Anyone who tests positive will have to take another test, but isolation protocols were still being worked out.

Testing will also take place on the French side for hauliers entering Britain.

France also agreed to allow select groups of people to travel from Britain to France if they could produce proof of a recent negative coronavirus test. They included noncitizens with a permanent residence in the European Union and people whose travel is deemed essential. Among them are diplomats, health workers helping in France’s fight against the virus, and the drivers and crew members of passenger planes, trains and buses.

The late-night deal came as a relief to merchants across Britain, who were increasingly concerned that the impasse could lead to shortages of essential goods, especially perishable items like fruit and vegetables.

But more than 50 other governments are continuing to block travelers from Britain in an effort to stop the spread of the new variant, according to a tally kept by the BBC.

The discovery of the variant had led in recent days to a lockdown across much of southeastern England and as well as the bans around the world for flights and trains from Britain.