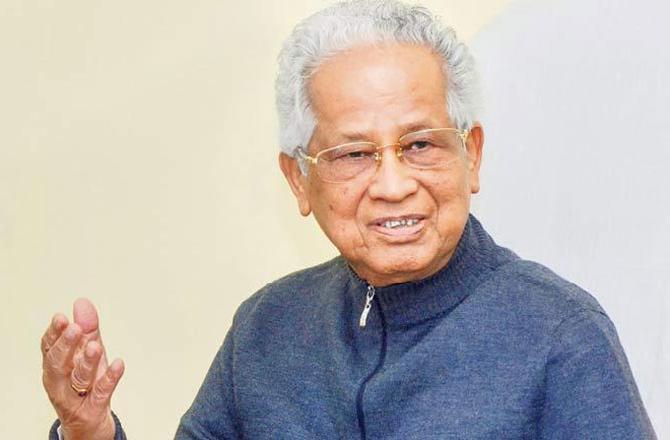 Assam bade an emotional send-off to its longest serving Chief Minister Tarun Gogoi on Thursday, as his funeral were marked by the presence of thousands of men and women and performed with full state honours at the Nabagraha cremation ground in Guwahati.

Amidst the chanting of solemn hymns and gun salute and band played by the Assam Police, the mortal remains of Gogoi were consigned to flames by his son Gaurav Gogoi, a Lok Sabha member, in presence of thousands of people, many of them were emotionally charged.

Wearing the traditional “Chelleng Sador” (a shawl) and ‘dhoti’ (men’s garment) along with a face mask Gaurav lit the pyre after performing the rituals.

The veteran Congress leader’s wife septuagenarian Dolly, daughter Chandrima, daughter-in-law Elizabeth and other family members placed sandalwood pieces on the pyre before it was lit by Gaurav.

Many people could not control their emotions and were weeping when the funeral rituals were started. As thousands of people joined Gogoi’s final journey, as per his last wish, the mortal remains of the octogenarian leader taken to a church, namghar, mosque, temple and a Bihu celebration field, before it was reached at the Nabagraha cremation ground.

It was an unprecedented emotional funeral procession, very rarely witnessed in Assam, with hundreds and thousands of enthusiasts, passersby and others stopping the flower-bedecked truck at many places, bowing their heads before the huge cut-outs of Gogoi on the vehicle, and threw flower petals.

Cutting across male and female and age groups, people were seen weeping, while many were taking photographs and video graphed the last journey of their much-loved leader.

As the funeral procession moved, the congested northeast India’s main commercial city came to a standstill.

The Bharatiya Janata Party-led state government had announced a half-day government holiday on Thursday to enable the people to show their last respect to the veteran Congress leader.

Congress spokesperson Rhituporna Konwar said, “Gogoi sir was genuinely a secular leader in theory and practice. There are many leaders who talk about secularism, but never follow it personally. Gogoi sir never thought otherwise when his son Gaurav married to a Christian woman from the UK. He encouraged cultural assimilation and brought together people belonging to different religions, caste and creed.”

Earlier on Thursday morning, the Gogoi’s glass coffin, wrapped in flowers, was taken out from Srimanta Sankardeva Kalakshetra, where his body was kept since Tuesday for the public to pay their respect.

In his political career spanning more than 50 years, Gogoi during his Chief Ministership from 2001 to 2016 tamed the decades old terrorism that ravaged Assam.

He was first elected to the Parliament in 1971 from the prestigious Jorhat seat in eastern Assam. In 1976, he was elected the joint secretary of the All India Congress Committee before he was made the party’s General Secretary from 1985 to 1990.

Gogoi also served as the president of the Assam Pradesh Congress Committee (1986-1990) and was an MLA for four terms. He first represented the Margherita seat in the Assembly. Since 2001, he had represented Titabor assembly seat.

His father was a medical practitioner at the Rangajan Tea Estate in Jorhat.