Home EntertainmentBollywood Exclusive! Arshad Warsi: I hug all the people who offer me non-funny roles

Exclusive! Arshad Warsi: I hug all the people who offer me non-funny roles 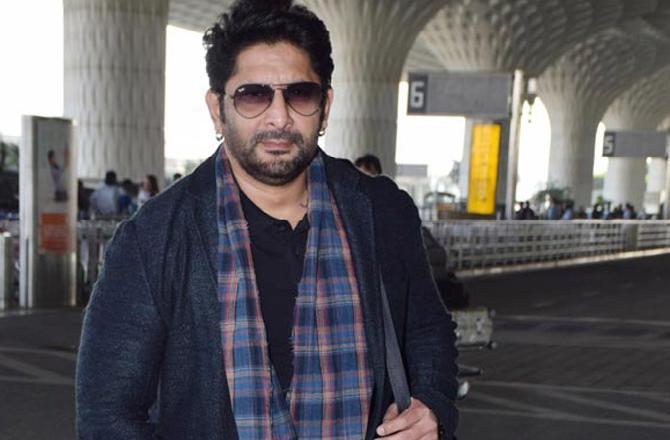 Known for being one of the top funny men in Bollywood, Arshad Warsi believes he has a lot more than just his impeccable comic timing to offer. While we have seen and adored him in comic roles in countless movies, Arshad Warsi is as powerful an actor when it comes to serious films as well. In this exclusive interview with mid-day.com’s Parul Sharma, Warsi opens on life during lockdown, how he believes he’s been under-utilised, and his latest release, Durgamati.

You know you can hold an easy conversation with a celebrity when the first thing you hear is their tinkling laughter when you compliment them. Arshad Warsi’s easygoing nature shone through when he laughingly thanked his interviewer for calling him ‘incredible’, which he quite frankly is.

Watch the complete interview below:

Then came the million dollar question – how did the lockdown treat him? Arshad Warsi shares, “You know, all the people who have suffered during the lockdown are going to hate me for saying this, I’m sorry, but I had a great time. I enjoyed myself. I loved being home, got to be with my kids. Good food was being cooked, I was chilling and I got to paint again. I was fine.”

Adding to this, Warsi quips, “There has been an excess of alcohol drinking. That went up a notch, which normally doesn’t happen. Suddenly it was like, don’t know what to do, getting bored, so all that happened. I like being home, but because of the pandemic I realised that there is a timeframe for me to be home. I now know that I can handle staying at home for 5-6 months, not more than that. I never knew that because my breaks would never be this long. I would take a month off, take a holiday, but I was always doing something. But let’s just say after six months, I need to start working or else I’ll go mad.”

Arshad Warsi was recently seen in the film Durgamati starring Bhumi Pednekar, the name of which was changed from Durgavati. When asked about the why of it, the Munnabhai actor says, “I don’t care! They can call it whatever they want (laughs)!” Then, “I really don’t know the reason, to be honest. There must have been a valid reason. You can call it Bhumi Pednekar for all I care!”

Speaking about his first serious horror-genre role in Durgamati, and whether there were any apprehensions, Arshad says, “Not at all. I think the only thing that gave me a bit of a thought was the horror part, because I hadn’t done it before. I’m personally not a big fan of horror films. But it’s not just a horror film, it’s a conspiracy. There are so many twists and turns, it’s just unpredictable. I loved my character, loved what I’m playing. I was happy that someone offered me a non-comic role, for a change. I hug all the people who offer me non-funny roles. I’m very happy with them, I love them.”

On being asked if distancing himself from comedy has been a planned move, Warsi says, “No, I don’t make future plans. For me, it’s based on each script. Personally, after a few comedies, I get fed up and I want to do something serious. I keep getting offers, but unfortunately, there aren’t many that I like. The last interesting thing that I heard and I did was Asur, if we speak of serious roles. After that I must have heard so many scripts for serious roles, which weren’t worth it. You got to like what you do.”

The Jolly LLB actor then admits that he thinks he’s under-utilised as an actor. He says, “I’m pretty honest and straight about everything, that’s why I get into trouble often. I’ve got way more than what I bargained for or asked for; what I came with and what I have now,  there’s a huge difference, so I’ve got more than what I’m due. But I do feel that I’ve not been utilised very well. I wish people would take advantage of me, use me for what I can bring to a film, because I think I have a lot more to give than people have taken.”

And could Warsi have done anything to avoid being under-utilised? He says, “I couldn’t have done anything about that. When you come into the industry and the first film you do, whatever character you play, if that character is loved, you’re bound to get stuck doing that for a long time afterwards. If you’ve not done a good job, but if you’re influential, you get opportunities, you get other things to do for you to figure out what you’re best at. Unfortunately, I did a good job in my first film.”

Speaking about remakes and the biggest mistake one can make while making them, Warsi says, “More than anything, it’s the sensibility of the original filmmaker. You have one director making a film, then you have somebody else making the same film, there’s a different sensibility to it. With Durgamati, we had the same guy (G. Ashok) making both the films, so we had the same sensibility when he did the Tamil version and the Hindi version. Secondly, it’s knowing what to change and what not to change. If you go wrong in those decisions, you’re going to goof up.”

Next, to be seen in Bachchan Pandey alongside Akshay Kumar, Warsi says the audience will love seeing both the powerhouse performers together in the same frame. We can’t wait!