Home News Exclusive: Chabahar can be fulcrum of transit between India and Central Asia: Indian envoy to Uzbekistan Manish Prabhat

Exclusive: Chabahar can be fulcrum of transit between India and Central Asia: Indian envoy to Uzbekistan Manish Prabhat 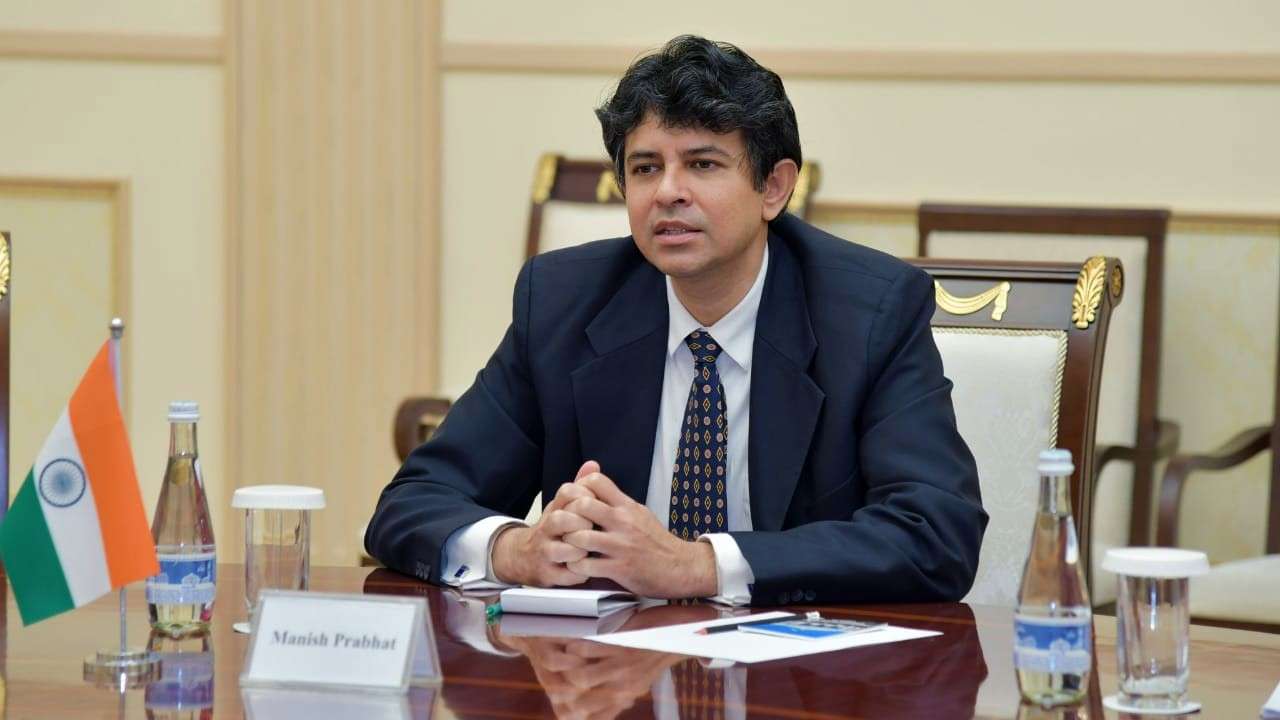 India’s envoy to Uzbekistan Manish Prabhat has said that Chabahar can become a ‘fulcrum of transit’ between India and Central Asia. The comments of the envoy come even as India, Uzbekistan and Iran held the first tri-lateral talks on the use of the Chabahar project in Iran.

Speaking to WION, the envoy said, “While transit through railways and trucks already takes place from Iran’s Bandar Abbas port to Central Asian countries, the need is to develop the infrastructure to connect Central Asia to the Chabahar port.”

During the virtual summit, the first with any central Asian country, New Delhi approved 448 million lines of credit for four projects developmental projects in the country – two in road construction and one each in sewerage treatment and information technology.

Excerpts from an exclusive interview…

Q. While it was the 7th such virtual summit, it was the first such virtual summit with a central Asian country. Why was Uzbekistan chosen for the first such meet in that region?Manish Prabhat: India-Uzbekistan strategic partnership has grown by leaps and bound thanks to the regular exchanges of VVIP visits in the last few years. Prime Minister visited Uzbekistan in 2015 and 2016. President Shavkat Mirziyoyev’s first visit to India took place in October 2018 and soon after he visited again in January 2019 to participate in the Vibrant Gujarat Global Summit.  This year Prime Minister’s visit to Uzbekistan was on cards. However, in the situation of the ongoing pandemic, the visit was not possible. It was decided to hold a virtual summit between the two leaders to continue the momentum of our exchanges. Indeed, it became India’s first virtual summit with an important partner in Central Asia and it was Uzbekistan’s first ever bilateral virtual summit with any country. Both sides were very satisfied with the results of the summit. The state of bilateral relations is excellent. Foreign Ministers and Defence Ministers have met and are working on a range of issues. Our multilateral cooperation in the United Nations, the Shanghai Cooperation Organization and in the India-Central Asia Dialogue format is set to further strengthen. Our positions on important issues like terrorism and Afghanistan are similar. India’s term as a non-permanent member of the UN Security Council for 2021-22 and Uzbekistan’s first ever stint as a member of the UN Human Rights Council for 2021-23 gives rise to new possibilities of cooperation. Uzbekistan reiterated its support for India’s permanent membership in a reformed UNSC. Both countries also called for reformed multilateralism including for comprehensive reforms of the UN structures.

Both India and Uzbekistan have cooperated closely in tackling the challenges of the Covid-19 pandemic. Prime Minister assured of India’s continued commitment to support Uzbekistan in its fight against the pandemic. Uzbekistan is very interested in Indian vaccines for Covid-19 and has sought our support in bringing these vaccines to Uzbekistan. India is keen to expand its development partnership with Uzbekistan. India has already declared a USD one billion line of credit for development projects in Uzbekistan. In the framework of the India-Central Asia Dialogue also, India has offered another line of credit of USD one billion for projects in the region. Both sides also signed an MoU on High Impact Community Development Projects to be undertaken in Uzbekistan under India’s grant assistance. In order to boost bilateral investment and trade, both sides are already engaged in negotiations on a Bilateral Investment Treaty and finalizing a Joint Feasibility Study which would pave the way for starting negotiations for a Preferential Trade Agreement. These will bring further dividends as Uzbekistan has recently become an Observer in the Eurasian Economic Union, a market of more than 200 million people. Both India and Uzbekistan seek to achieve a bilateral trade turnover of USD one billion but have actually reached only one third of that landmark. A major factor inhibiting the development of closer trade and economic relationship is the absence of economic and efficient surface connectivity. Both sides believe that the Chabahar route can be the key to address this problem. A total of nine agreements and MoUs on cooperation were signed during the summit including on line of credit, information technology, cyber security, solar energy, customs, standardization, mass communication etc. Space and civil nuclear energy are also upcoming areas of our bilateral cooperation.

On connectivity, a trilateral happened between on Chabahar between India, Iran, and Uzbekistan. Chabahar is India built port, how do you see Central Asia benefitting from it?Manish Prabhat: As we are all aware, India has been pushing for encouraging the use of the Chabahar port by all Central Asian countries.  Even during the first India-Central Asia Dialogue at the level of Foreign Ministers held in January 2019 in Samarkand, then External Affairs Minister Smt. Sushma Swaraj had put forth the idea of the use of Chabahar for establishing greater connectivity between India and Central Asia.  It is heartening to see that Uzbekistan fully supports this idea and has taken the initiative to host the first trilateral dialogue among Uzbekistan, India and Iran on the possibilities of the joint use of Chabahar port.  The trilateral meeting took place on 14 December at the level of Deputy Ministers of the three countries concerned with transport and logistics relating to the Chabahar port.  The three sides discussed the possibility of developing joint platforms and establishing commercial parameters to encourage transit of goods through the Chabahar port.  The idea, when taken further, would need customs administrations of the three countries, freight forwarding companies and other stakeholders to work together.  We would need the participation of Afghanistan and other Central Asian countries to have a wider reach for this proposal.  While transit through railways and trucks already takes place from Iran’s Bandar Abbas port to Central Asian countries, the need is to develop the infrastructure to connect Central Asia to the Chabahar port. This will further make the route between India and Central Asia shorter and economical for the movement of containers.  The Chabahar port is already successfully handling the movement of goods between India and Afghanistan.  Its success has already shown that it has the potential to become the fulcrum of transit between India and Central Asia.

Uzbekistan is the first country in Central Asia with which we have started our development partnership in terms of extending Lines of Credit. We have now listed 4 projects for the partnership, can you give details?Manish Prabhat: As per the request of the Government of Uzbekistan, the Government of India has approved four projects to be undertaken under India’s Line of Credit in Uzbekistan.  These projects are in the sectors of road construction, sewerage, and supply of IT equipment for education and are worth USD 448 million. These projects are also spread over different regions of Uzbekistan.  More such projects will also be identified in the future as our total commitment is of USD 1 billion of Line of Credit.  The Government of Uzbekistan is expected to soon make us available the Detailed Project Reports so that they could be studied and examined from a technical and financial point of view. The implementation of projects can begin soon thereafter.

How do you see future cooperation. We have with Gujarat and Andijan, also plans for Haryana and Fergana. IT is another sector which has seen cooperation…Manish Prabhat: Establishing cooperation between identified pairs of regions of Uzbekistan and states of India could become a good model for encouraging investment and projects between the two sides.  We have been encouraged by the results of the visit of Chief Minister of Gujarat Shri Vijay Rupani who led a strong business delegation of Gujarat-based companies to the Andijan region of Uzbekistan in October 2019. Gujarat and Andijan have a Memorandum of Understanding on cooperation.  Shortly after the visit of Shri Rupani, a strong Uzbek business delegation paid a return visit to Gujarat.  As a result of these visits, more than 20 B2B Agreements and documents were signed, especially in the fields of pharmaceuticals, IT, education and agriculture and agri-processing.  Cadila has announced a major investment in Andijan to manufacture pharmaceuticals.  Andijan has opened a special Free Pharmaceuticals Zone to attract Indian companies.  Both India and Uzbekistan seek to further expand this model of cooperation and are taking further steps to encourage cooperation between the Fergana region and the state of Haryana.

Development of various contours of cooperation would depend on respective strengths of the identified regions and the states and their potential. IT certainly continues to be a major sector of our bilateral cooperation.  It may be noted that the Uzbek government invited an expert from the Software Technology Parks of India to be stationed in Uzbekistan and provide technical expertise to establish IT parks in the country.  As a result, Uzbekistan’s first-ever IT Park was opened in Tashkent in early 2019 and more IT parks have since been opened in other regions of Uzbekistan.

The Uzbekistan government is upbeat about attracting Indian IT companies to Uzbekistan to help with various digitization and e-governance activities in the country. The Uzbek side would also like to benefit from India’s experience in helping startups to grow.

Uzbek Parliament has also constituted an India Friendship Group in their Parliament, is the first such Parliament in the region to do so?

Manish Prabhat: Oliy Majlis, the Parliament of Uzbekistan has expressed its strong desire to expand cooperation with the Indian Parliament and benefit from the study of India’s parliamentary practices given our strong credentials of being the largest democracy in the world.  As per the parliamentary practices in Uzbekistan, Parliamentary Friendship Groups for India have already been established in both Houses of the Oliy Majlis and they would like to have interaction with their counterpart groups in the Indian Parliament.  There have also been proposals to have online interaction between parliamentarians from both sides on topics of mutual interest and exchange of visits in future once the pandemic situation improves.   Both India and Uzbekistan would like to strengthen their inter-parliamentary cooperation. With the ongoing reforms in various spheres in Uzbekistan, including in the fields of governance, media, economy and finance, there is interest in the Uzbek Parliament to study the practices of developed democracies to learn how their parliaments support such initiatives.