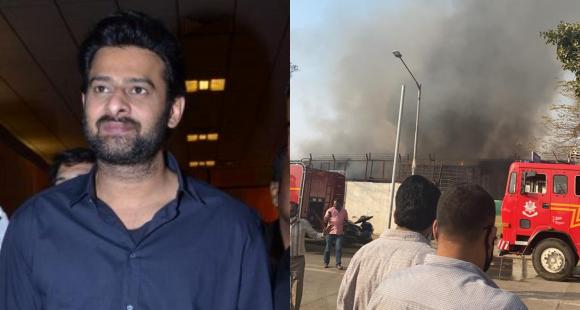 The Adipurush team has been shooting against massive chroma and green screen set up which came burning down due to the fire. Read more details below.

The much-awaited Prabhas and Saif Ali Khan starrer Adipurush went on floors with a test shoot in January at a studio in Mumbai. The team has been shooting against massive chroma and green screen set up, since the film is said to be exploring a new motion capture technology. However, post lunch today, a bystander saw some fire flakes outside the studio and on dwelling deep into it, Pinkvilla has learnt that there was a fire on the sets of Adipurush.

The source reveals, “It happened due to short circuit and the entire chroma set up went into ashes. However, it eventually came under control and no casualties have been reported. Om Raut and his entire team are safe.”

Prabhas and Saif were not a part of this shoot. “The situation is under control now. Thankfully, all fire safety measures were in place on the set. A fire brigade was spotted on the sets within minutes of the fire and took the situation under their control. By god’s grace, no causalities have been reported,” the source assured.

In Adipurush, Prabhas plays a character modelled on lord Ram and Saif Ali Khan plays the role of the evil, Raavan. The film is gearing up for an Independence Day 2022 release. While Prabhas joins the shoot later this month, Saif is expected to join the set from March.

#EXCLUSIVE: A huge fire beaks out on the sets of Prabhas and Saif Ali Khan starrer Adipurush in Mumbai.
No injuries have been reported yet. #BreakingNews #Prabas #SaifAliKhan #Adipurush #Trending #news #mumbai pic.twitter.com/waJdlRyCc5

The leading lady to play Sita is yet to be decided, however, buzz is that, it’s a toss between Kriti Sanon and Keerthy.  Prabhas is currently shooting for the gangster drama, Salaar in Hyderabad, whereas Saif just wrapped up shooting for the horror comedy, Bhoot Police.

Adipurush is said to be one of the biggest films to have come out of Indian cinema, mounted on a budget and scale like never before. It would be Om Raut’s second directorial after Ajay Devgn’s Tanhaji: The Unsung Warrior.