Home EntertainmentBollywood Exclusive! Shikha Talsania on being offered Coolie No. 1: I was gobsmacked; I was like ‘yes yes yes’

Exclusive! Shikha Talsania on being offered Coolie No. 1: I was gobsmacked; I was like ‘yes yes yes’ 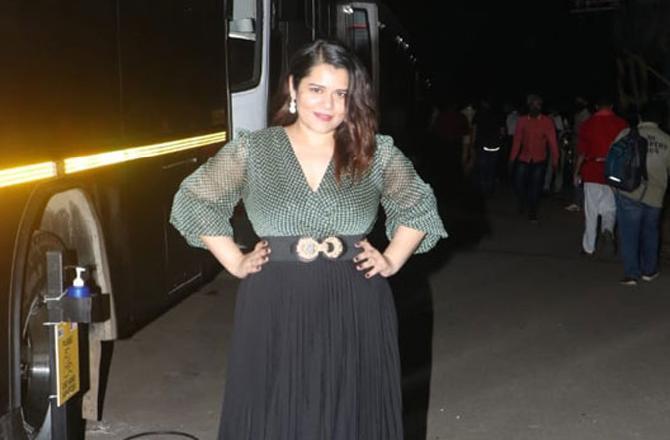 Shikha Talsania has acted in Bollywood films like Wake Up Sid and Veere Di Wedding, and both the films in a way are representations of liberation. In Coolie No. 1, she’s exploring the space of madness and mindless fun. It stars Varun Dhawan and Sara Ali Khan, donning the respective hats of Govinda and Karisma Kapoor from the OG Coolie No. 1.

Speaking exclusively to Supriya Nair of mid-day.com, Talsania talks about the film, why she feels strange to talk about her confidence, and much more.

First, when asked about her journey so far, she says, “Fun, resilient, patient, and a lot of things learned along the way.” Her father Tiku Talsania is one of the most popular actors of the industry, who is known for his comic timing.

When asked about her reaction on getting the offer from the makers of Coolie and breaking the news to dad, who was a part of the original 25 years back, she says, “I was gobsmacked. I was like ‘yes yes yes.’ I would love to be a part of it and everyone at home was also very happy when I told them. And I remember dad saying, “Have fun, this is going to be that kind of a film where you can have fun.”

Did she have any conversations about David Dhawan with her father and how he was like on the sets? This is what she says, “Dad and David sir have collaborated so many times so I remember him coming home happy and satisfied. So when I could be a part of that, it was very special, it holds a very special place in my heart.”

Did she ever visit any of the sets with her dad? She says, “No, because so much was happening at that time but I wish I had.” Going by the trailer, Shikha Talsania seems to be playing one of Varun Dhawan’s love interests. What can we expect from her? “I hope entertainment, that’s the one thing you can expect from all of us. Really excited that the film is finally releasing and every one gets to watch it. Sara and I play sisters, that’s all I can tell you about my role, rest you’ll have to watch the film,” she quips.

Talking about the experience of working with the film’s leading man, Talsania says, “Actually, Varun and I met when he had come to watch one of my plays, which was also a comedy. And I have seen so many of his films and he has great comic timing. We have seen each other’s work and were excited to be on the same sets. I remember in one of the scenes, David sir said we both have cracked it, just calm down, no more variations required.”

Coolie No. 1 also boasts of an ensemble of veterans like Johny Lever, Paresh Rawal, Jaaved Jaaferi and Rajpal Yadav. Talking about this, the actress shares, “It was intimidating, we all were making mental notes.” The next question is about her journey as an actor and how easy or difficult it has been, given she too is a star kid.

She says, “It did help me. I knew what the life was all about, it was not an easy one, it has its own sets of challenges, rewards and everything in between. So I knew about it but living it on your own and experiencing it on your own is your own journey. It did help in the way that I didn’t have to move cities to pursue what I wanted to. I didn’t have to explain to my family that the night shift will be till this time and I’ll come home till this time. I had transport available so I had that safety.”

When asked about actors being typecast in films and going through this crippling fear herself initially, Talsania says, “Yes, absolutely. After Wake Up Sid, I did get offered parts that I felt were going in very one-dimensional zones, and it happens to every actor and every creative personality. It’s a wonderful time to be in the creative field and to create art, and you have to be, as I said earlier, resilient and patient.”

There are certain expectations from actors to look a certain way, has Shikha overcome it? “I haven’t,” she answers. She continues, “It’s not just the film industry, this has become a part of the culture. The social fabric that we are a part of, of course you have those days. You question yourself and you question your vanity, you question the reactions you’re getting from everybody. But at the end of the day, I know what’s up in my mind and my heart. I find it very strange to answer questions like where do I get my confidence from. I can touch my toes, I can solve a few Math problems, I love my friends and family.”

She adds, “I am a good human being, so I get my confidence.” How does she deal with the online trolling and negativity? She says, “I can speak for myself, I get a lot more love that hate. I feel very lucky and I feel very happy about it. And honestly at the end of the day, it’s just one aspect of your life. It’ll have as much importance as you give it.”

Also Read: Shikha Talsania: People Didn’t Know I Was My Father’s Daughter, He Didn’t Make Any Phone Calls For Me