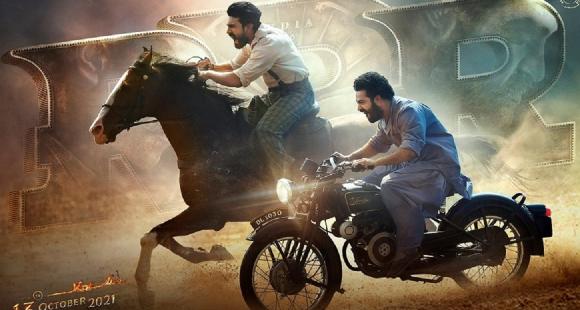 Pen Studios has bagged the North Indian theatrical rights of SS Rajamouli’s much awaited epic, RRR, fronted by Jr. NTR, Ram Charan and Alia Bhatt with Ajay Devgn in a pivotal role. The production house has bagged the theatrical rights of the Hindi dubbed version as also the rights to release the Telugu, Tamil and other version of the film in the North Indian market. Dr. Jayantilal Gada has also acquired the electronic, digital and satellite rights of all languages of this period drama, set in the 1900s.

Pinkvilla is exclusively bringing the deal structure for the North Indian version of RRR. We hear, SS Rajamouli and Jayantilal Gada have struck a unique deal for the North Indian version. The Bollywood studio has acquired the theatrical rights coupled with the Hindi dubbed satellite, digital and electronic rights for an estimated sum of Rs 200 to 210 crore. Well, that’s not all, according to a trade source, Dr. Gada is a 50% partner in the revenue of Satellite, Digital and Electronic rights of the Hindi version. Example, if the Hindi dubbed version of RRR fetches Rs 100 crore from sale of satellite, digital and electronic rights, Jayantilal Gada will get a straight revenue of Rs 50 crore.

RRR North Indian theatrical rights sold for Rs 140 crore… The last film which fetched money from outright sale of theatrical rights was the Salman Khan fronted Tubelight, which was sold to NH Studioz for a sum of Rs 135 crore.

In a nut shell, the SS Rajamouli film would have to earn anywhere in the range of Rs 250 crore plus to break even in the Hindi belts, with approx. footfalls of 1.7 crore. SS Rajamouli’s last film, Bahubali 2 had raked in Rs 510 crore, whereas Bahubali: The Beginning collected Rs 125 crore at the box-office in the Hindi states with a footfall of 1.50 crore. RRR needs to sell approx.. 10% more tickets than Bahubali 1 to sail through at the BO. It’s going to be a challenging task, but well, it’s an SS Rajamouli film, and one can always expect loads of surprises in the story. The film has fetched the amount based on SS Rajamouli”s goodwill and power to bring the audience in the cinema halls, and the hope is, he repeats the Bahubali history again in the Hindi belts with humongous business. It’s a risky preposition, but as they say, Risk Hai, Toh Ishk Hai.

To note, apart from the above-mentioned bifurcation, Pen Studios has also acquired the digital and satellite rights of Telugu, Tamil, Malayalam and Kannada version too, and the total investment to attain all the rights including North Indian theatrical is Rs 400 crore plus. Stay tuned as we come up with an exclusive article on pre-release business of RRR from all languages soon.