Exotic earthworm found in Karnataka for the first time 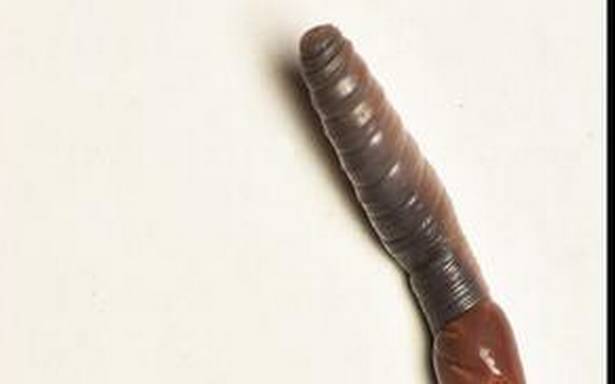 An exotic and highly invasive earthworm — Amynthas alexandri of the Megascolecidae family — has been collected and reported for the first time from Karnataka. Its original home is believed to be Southeast Asia.

It has been found to be distributed at four sites in the State — Hosabale and Hosanagara in Shivamogga district, Kaimara in Chikkamagaluru district, and Konaje in Dakshina Kannada.

Earlier, the same earthworm was recorded in 15 States/Union Territories in India, according to a study published in the January issue of the Canadian journal Megadrilogica, an international scientific journal devoted to publishing earthworm studies from across the world.

The study — Amynthas alexandri Beddarad, 1901 (Clitellata: Megascolecidae), a new addition to the earthworm fauna of Karnataka State, Southern India — was conducted and reported in the journal by four researchers, including two from Mangalore University.

Prof. Sreepada and Mr. Hasyagar told The Hindu that the distribution of Amynthas alexandri was also found at Puttur in Dakshina Kannada recently.

The four authors concluded in the journal: “…being large, fast-moving and highly invasive in nature, this species has practically inhabited all the districts of Kerala. As has happened in Kerala, soon it may invade the northern portions of the Western Ghats in Karnataka.”

Amynthas alexandri is a medium-to-large-sized worm and its colour is brownish in light and dark at dorsum. Its length varies from 132 mm to 169 mm, and it is 5 mm to 6 mm in diameter.

Earthworms are important for maintaining the soil fertility of forests, grasslands, and agro-ecosystems.

The original home of Amynthas alexandri earthworms is believed to be Southeast Asia, though the type of specimen observed for the first time in India by Beddard in 1901 had its origin in Kolkata.

Their distribution in Asia earlier was in China, Myanmar, Pakistan, Thailand, Europe and England.