Home News Explained: Who Is Leading The Myanmar Protests And How Are They Being Organised?

Explained: Who Is Leading The Myanmar Protests And How Are They Being Organised? 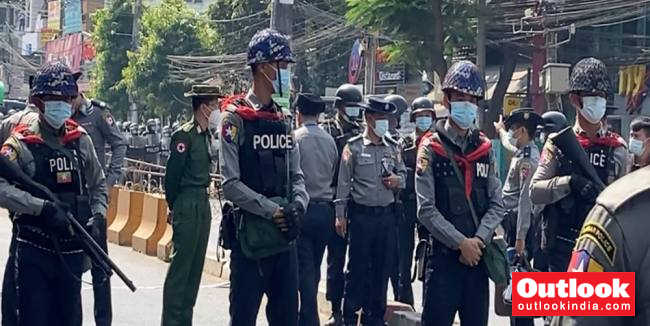 Protests in Myanmar against the military coup that removed Aung San Suu Kyi’s government from power have grown in recent days despite official efforts to make organizing them difficult or even illegal. Here’s a look at who is organizing the protests and the obstacles they face:

Is protesting allowed in Myanmar?

It was a grey area for many days after the February 1 coup, which also included the declaration of a state of emergency. But with the protests growing and spreading in recent days, the military on Monday issued decrees that effectively ban peaceful public protests in the country’s two biggest cities.

Rallies and gatherings of more than five people, along with motorized processions, are outlawed and an 8 p.m. to 4 a.m. curfew has been imposed for areas of Yangon and Mandalay, where thousands of people have been demonstrating since Saturday.
The restrictions have raised concerns about the potential for a violent crackdown.

Who is leading the protest?

For the most part the protests have grown organically.

“This movement is leaderless — people are getting on the streets in their own way and at their own will,” said Thinzar Shunlei Yi, a prominent activist.

Activist groups, professional work groups, unions and individuals across Myanmar have all come out in opposition to the coup, as has Suu Kyi’s National League for Democracy party.

Shortly after the return to direct military rule — which Myanmar experienced for five decades until 2012 — a Facebook page titled “Civil Disobedience Movement” started issuing calls for peaceful protests. The page now has more than 230,000 followers and hashtags associated with it are widely used by Myanmar Twitter users.

Street protests over the weekend featured the heavy presence of unions, student groups and other groups representing professions as diverse as park rangers and book printers.

Yangon residents have voiced dissent by banging pots and pans together across the city at night.

What are the obstacles protesters face?

One of the biggest challenges for protesters has been the military’s attempts at blocking communications.

Authorities first went after Facebook — which has more than 22 million users in Myanmar, or 40% of the population — but people simply moved to other platforms like Twitter.

Making the rounds have been copies of safety protocol information sheets, some of them originally from Hong Kong, with instructions on how to encrypt communications and how to stay safe during protests.

Over the weekend the military temporarily cut internet access and some phone services. Protestors were quick to adapt, with some even using phones registered in neighboring Thailand.

“Even when the internet was completely cut off on Saturday for 24 hours, people were able to communicate within Myanmar by phone and SMS,” said Clare Hammond, a senior campaigner the rights group Global Witness.

For some who don’t have phone service or internet access during blackouts, word of mouth and simply historical precedent has brought them to protest sites, many of which are the same as in previous uprisings against military rule.

Will the protests continue?

So far protesters seem undeterred, even with the new restrictions on demonstrations.

Nevertheless, some are concerned that the military is laying the groundwork for a violent crackdown such as those that ended protest movements in 2007 and 1988.

Linda Lakhdhir, a legal advisor at Human Right Watch, said the military could try to use the violation of the military’s decrees as well as other laws already in place as justification for a crackdown.

“They may maybe a terrible, abusive, draconian laws, but the military will justify (use of them) as them following the law,” she said.

Authorities fired water cannons and rubber bullets at some protests on Tuesday, ratcheting up tensions.