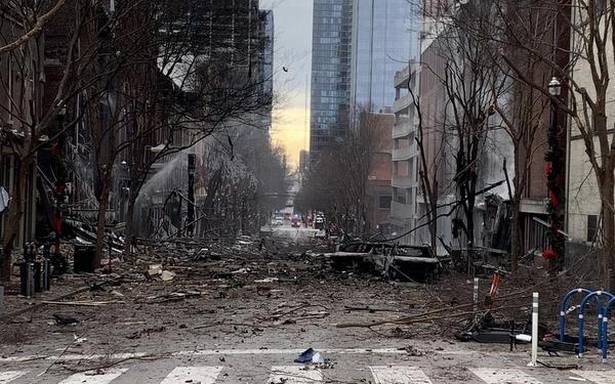 An explosion linked to a vehicle rocked downtown Nashville on Christmas morning, sending shattered glass and debris over a wide area and rocking nearby buildings.

The Metro Nashville Police Department said via Twitter that the explosion occurred at 6:30 a.m. Friday and that state and federal authorities were on the scene, as were emergency crews including the fire department.

Black smoke and flames were seen early Friday billowing from the area, which is packed with bars, restaurants and other retail establishments and is known as the heart of downtown Nashvilles tourist scene.

Buildings shook in the immediate area and beyond after a loud boom was heard.

The Metro Nashville Office of Emergency Management told Nashville television station WKRN that a parked recreational vehicle exploded and damaged several buildings. No injuries were immediately reported. The station also quoted officials as saying the explosion did not seem suspicious. The fire department sent out a tweet asking residents and others to avoid the area.

It is unclear how the remains are related to the Friday explosion or whether they might belong to the person believed to be responsible or a victim.

The officials could not discuss an ongoing investigation publicly and spoke to the AP on condition of anonymity.

Authorities have said they believe the blast was intentional.

The city”s police chief said officers responded to a report of a shots fired before discovering the RV that was blaring a recorded warning that a bomb would detonate in 15 minutes. Police evacuated nearby buildings and called in the bomb squad. The RV exploded shortly afterward.

Buck McCoy, who lives near the area, posted videos on Facebook that show water pouring down the ceiling of his home. Alarms blare in the background and cries of people in great distress ring in the background. A fire is visible in the street outside. McCoy said the windows of his home were entirely blown out.

“There were about four cars on fire. I don’t know if it was so hot they just caught on fire, and the trees were all blown apart,” he said.