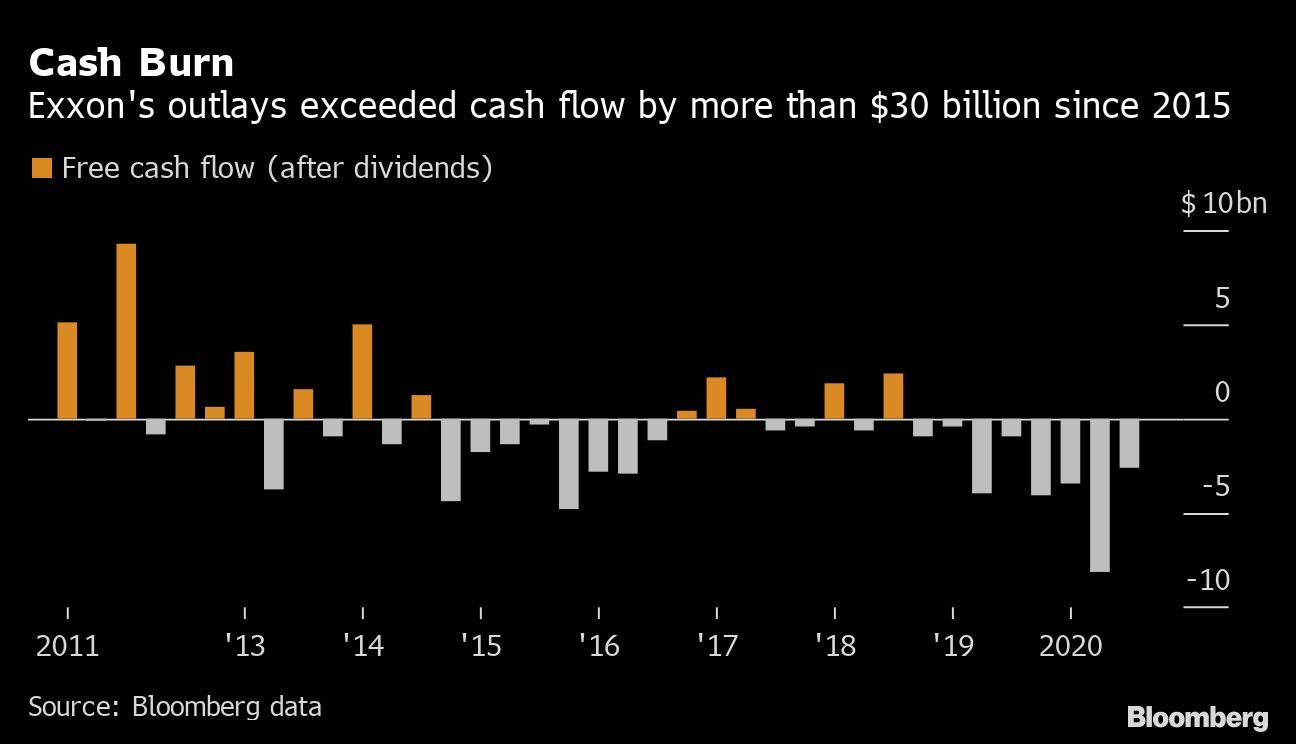 (Bloomberg) — Exxon Mobil Corp. pledged to safeguard the S&P 500 Index’s third-largest dividend after posting its first annual loss in at least 40 years, a show of defiance by an oil driller besieged by activist investors and climate-change campaigners.

Exxon assured investors of its financial health in a world of $50-a-barrel oil and promised that if crude were to dip to $45 it would sacrifice spending in the name of dividends. The Western world’s largest oil explorer has increased the payout each year since 1972, unlike rivals Royal Dutch Shell Plc and BP Plc that cut distributions last year.

The dividend pledge comes on the heels of a $19.3-billion writedown of U.S. natural gas fields and other assets, and the lowest production since the 1999 Mobil Corp. merger. Cash flow from operations — a key gauge of corporate strength — shrank by almost 9% during the final three months of 2020 to $4 billion, not even enough to cover capital spending.

“The focus will remain on cash-flow generation and while it wasn’t great in the quarter, Exxon did provide guidance on covering the dividend with oil at $50 a barrel,” Giacomo Romeo, a London-based analyst at Jefferies International Ltd., said in a telephone interview.

Exxon’s share-price bounce and management’s confidence in their ability to bounce back from the wreckage of 2020 stands in contrast to disappointing fourth-quarter results from Chevron Corp. and BP. Exxon Chief Executive Officer Darren Woods said capital spending this year would be the lowest since the Mobil tie-up two decades ago. Even so, the company faces an uphill battle to convince investors it can generate sufficient returns in a world moving toward lower-carbon energy.

“We’ve got lots of flexibility under different price environments to sustain the dividend,” Woods said during a conference call with analysts. “We feel really good about where we’re at today that we’ve got good upside with respect to growing the cash flow.” Oil could fall as low as $35 and the dividend would be safe, he said.

The scale of the cash-flow improvement needed is huge. Exxon paid out 90% of its cash from operations in dividends in 2020, compared with 30% for some competitors, according to Citigroup Inc.’s Alastair Syme. “The suggestion is that Exxon believes in a future of much higher oil prices,” he wrote in a note.

To weather the storm of 2020, when the pandemic-driven price crash ran headlong into Woods’s ambitious and expensive growth strategy, the oil titan increased borrowings by 44% to $67.6 billion. On Tuesday, Woods drew a line at $70 billion as the “hard limit” for how high the debt load can grow. He signaled Exxon will whittle away at the obligations in coming quarters.

Such was the pressure exerted by last year’s price collapse that Woods held preliminary talks with his counterpart at Chevron about a megamerger, the Wall Street Journal reported Sunday. Woods declined to comment on the report in the call.

Excluding the historic $19.3 billion impairment, Exxon returned to profit in the fourth quarter, earning 3 cents per share, and ending a run of three consecutive quarterly losses. That compared with the Bloomberg Consensus estimate for a 2-cent profit.

Before Tuesday’s reassurances, some investors had been worrying the oil titan might resort to a cut to shore up its cash position. As recently as October, the company was still pledging to increase payouts, but that changed a month later when management dropped the word “growing” from its discussion of dividends.

As he begins his fifth year as CEO, Woods has been forced to all but abandon his 2018 blueprint for building a suite of new oil, gas and petrochemical facilities while drilling and construction costs were low. Exxon announced 14,000 job cuts, delayed megaprojects from the Permian Basin to Mozambique, and has pledged to keep a tight rein on spending through the middle of this decade.

The cutbacks helped turn Wall Street analysts more positive on the stock, especially with oil prices rebounding this year, but investors are still nursing deep losses after a 41% plunge in 2020 and years of underperformance compared with peers.

To counter growing criticism of its environmental record, Exxon announced plans on Monday to set up a new business called ExxonMobil Low Carbon Solutions that will spend $3 billion on low-emission technologies through 2025. The slate of projects included several previously announced initiatives.

Exxon Mobil’s investment pullback may not be enough to protect the $15 billion dividend; it can likely maintain a dividend through 2021, but at the expense of long-term returns. A countercyclical investment strategy has been reduced to a near standstill, but the company is still churning through cash.

Last week, activist investor Engine No. 1 formally took up the cause for a change in strategy, nominating four directors to the board ahead of Exxon’s annual meeting in May. On Tuesday, Exxon appointed former Petronas CEO Tan Sri Wan Zulkiflee Wan Ariffin to its board and said it’s talking to other director candidates.

However, the appointment was not to the investor’s liking. “A board that has underperformed this dramatically and defied shareholder sentiment for this long has not earned the right to choose its own new members or pack itself in the face of calls for change,” it said in statement.

Meanwhile, Exxon is in talks with investor D.E. Shaw & Co. that may lead to additional director nominations in the weeks ahead, according to people familiar with the matter.