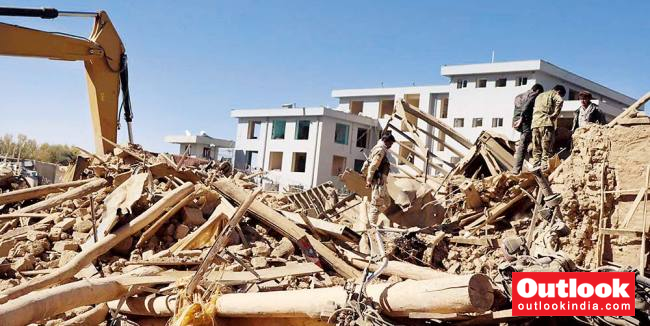 Political negotiations to end 18 years of civil war between the Afghan government and the Taliban that started on September 12 in Doha, the capital of Qatar, has not stopped the periodic bloodletting—latest spurts in a conflict that has ravaged the country and killed nearly 1.57 lakh people, including 43,000 civilians. Despite the violence, neither side has pulled out of talks, bringing a sliver of hope to a long-suffering, war-weary people.

Though it is normal for a ceasefire to be declared before formal talks to end a conflict begin, the Taliban adamantly refused to stop the violence before a peace plan is signed. “The Taliban has no other assets but its propensity for violence. If that stops, what is its leverage? The violence it can unleash is its main negotiating asset, a bargaining chip. It cannot afford to give this up in the initial stages of the talks,’’ says Gulshan Sachdeva of JNU’s School of International Studies, who has lived and worked in Afghanistan.

After attending the Doha talks with the Taliban, Abdullah Abdullah, chairman of Afghanistan’s High Council for National Reconciliation, was in New Delhi to brief Indian leaders. He met with Prime Minister Narendra Modi, National Security Adviser Ajit Doval and Foreign Minister S. Jaishankar. India is a close ally of the current establishment in Kabul, and though President Ashraf Ghani and Abdullah have their differences, India has excellent relations with both. New Delhi’s line on an “Afghan-led, Afghan-owned and Afghan-controlled process” is an echo of the Afghan government demand.

The Doha talks finally got off because of American efforts. US President Donald Trump, eager to get American troops out of the Afghan quagmire, wanted it before the November 3 presidential elections. Pakistan, too, was willing to cooperate, mindful of the goodwill that it would generate among the Americans. However, the outcome is unclear over power sharing—the one crucial point of the talks.

“The Doha talks are not taking place on a level playing field. There is no guarantor—the US has done its own deal with the Taliban. The Afghan government has little choice but to continue to engage,’’ says Rakesh Sood, former Indian envoy to Kabul.

Though PM Modi reaffirmed to Abdullah India’s long-term commitment to further deepen the historical ties with Afghanistan, is that possible if a Taliban regime is installed in Kabul through the peace talks? That question has no easy answers.

Violence is the Taliban’s calling card in the Doha talks, its main negotiating asset, bargaining chip.

From Hamid Karzai to Ashraf Ghani, India has from the beginning consistently supported an elected Afghan government, notwithstanding the consistent claims of rigged elections. Even as the US, Russia, China and Iran were recalibrating their Afghan policy and opening a line to the Taliban, successive Indian governments refused to acknowledge the ground reality. Antipathy towards Pakistan—chief backer of the virulently anti-India Taliban as well as creator of terrorism targeting India—was a chief reason. Indeed, Pakistan became a bête noire for both the Afghan government and India. Again, memories of the hijacking of IC 814 from Kathmandu to Kandahar in 1999 by Pakistani terrorists with full backing of the Taliban had left a bitter taste too.

Yet, for all that, New Delhi should have wised up earlier. After all, it was evident for a long time that an elected Afghan’s government’s hold over large parts of Afghanistan was tenuous; US and NATO forces were also in no position to eliminate the Taliban. An ostrich-like approach to the Taliban would thus amount to be playing into Pakistan’s hands.

Pakistan’s powerful military and its spy agency the Inter-Services Intelligence (ISI),  while supporting the Doha talks, are hoping that in the event of a political settlement, the Taliban will once again become a powerful legitimate force in Afghanistan. The idea is to instal a Pakistan-friendly government in Kabul, which would ensure that India’s influence and developmental footprint in Afghanistan, built up over two decades of diplomacy and investment, are snuffed out. Elementally and continually bitter about the 1971 India-Pakistan war that led to the break-up of the country and the creation of Bangladesh, Pakistan is paranoid about India’s incremental presence in Afghanistan, literally its backyard.

By refusing to talk to the Taliban, India is doing exactly what Pakistan wants. It is hard to imagine that India has not been in touch with some sections of the Taliban in the last many years. Perhaps not with its top leaders, but in Kandahar, Herat, Jalalabad, and Mazr-e-Sharif, where Indian consulates are located, officials must have engaged with lower-ranked leaders of the Taliban. It would have been be foolish if they had not exercised that option.

In 2018, two former Indian diplomats were in Moscow when the Taliban were invited by Russia for a meeting with different Afghan groups. But there was not much interaction there with the Taliban leadership. In February this year, Indian ambassador to Qatar, P. Kumaran, was present when the US and Taliban signed the peace agreement. Again, at the ceremonial inauguration of intra-Afghan talks in Qatar in September, India’s foreign minister S. Jaishankar addressed the meeting virtually. He later tweeted: “Addressed the conference on Afghan peace negotiations at Doha today. Conveyed that the peace process must: • Be Afghan-led, Afghan-owned and Afghan-controlled • Respect national sovereignty and territorial integrity of Afghanistan • Promote human rights and democracy.’’ In attendance in Doha were Joint Secretary J.P. Singh, (in-charge of Pakistan, Afghanistan and Iran) and India’s new ambassador to Qatar, Deepak Mittal.

Is this an indication that New Delhi is shifting its position on the Taliban? Perhaps it has now seen the writing on the wall and accepted that a continuing footprint in Aghanistan would necessarily involve engaging with the Taliban. After all, many of the first generation of Taliban leaders, including Mullah Omar, are dead. Certainly, Mullah Abdul Ghani Baradar and the Haqqanis continue to be close to Pakistan, but there are also new Taliban leaders who may not have the same loyalty towards Pakistan. Regarding the Taliban as untouchables is no longer an option.

If Delhi avoids the Taliban, it plays into the hands of Pakistan, which desperately wants India out of its backyard.

“India’s blessings for the success of the Doha process, as well as the visits of high-ranking Afghan leaders since then, including Dr Abdullah, suggests that the Indian government is testing the waters for such contacts and engagement, held back so far mainly because India did not want to deligitimise the Afghan state and legitimise the Taliban—which refused to name, let alone recognise, the Afghan government until now—or appear to be doing a deal behind the back of the Afghan people, as some other countries seem to have done. Now that the two sides are talking, we should engage the Taliban and join Afghan and international efforts to bring peace to Afghanistan and protect our interests there,’’ says Gautam Mukhopadhyay, another former Indian ambassador to Afghanistan. “India’s interests can be best protected as a part of the peace process rather than outside it,” he adds.

How New Delhi calibrates its approach towards the peace talks and, at the end of it, towards the Taliban, remains to be seen. But there certainly appears to be a consensus for engaging the Taliban, rather than continue with a cautious and non-committal wait-and-watch policy.