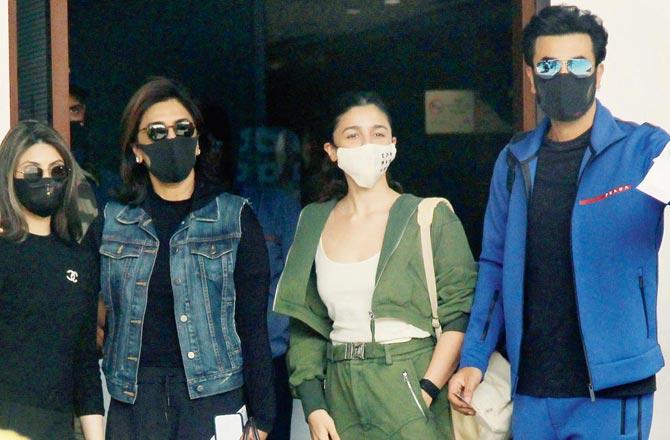 On Tuesday, Ranbir Kapoor and Alia Bhatt took off for Jaipur on a chartered flight. They were accompanied by Neetu Kapoor, Riddhima Kapoor and husband Bharat Sahni, and daughter Samara. Bhatt’s mother Soni Razdan, along with sister Shaheen Bhatt was also spotted at the airport.

They will usher in 2021 at the Ranthambore National Park. Considering the families are together, there is tattle that RK might formalise his relationship with Bhatt, especially after his recent admission that he is keen to tie the knot.

This is the first time the entire family is spotted together, leaving the city. Earlier, Alia and Ranbir were snapped on a mini-vacation to Goa. Both the actors were busy completing their prior commitments before they took off on a holiday. Barely a day after Alia Bhatt returned from the shoot of SS Rajamouli’s RRR in Hyderabad, she boarded the aircraft again.

Ranbir Kapoor and Alia Bhatt will share the screen space in Ayan Mukerji’s Brahmastra. This is the first time Alia and Ranbir will be seen together by their fans. The film also stars Amitabh Bachchan, Nagarjuna, Dimple Kapadia, and Mouni Roy. This film was earlier titled Dragon and was slated to release on Christmas 2016.

Apart from this fantasy drama, the actress has a few more projects to look forward to. Alia Bhatt will be next seen in Sanjay Leela Bhansali’s Gangubai Kathiawadi, Karan Johar Takht. On the other hand, Ranbir Kapoor has Shamshera in his kitty. “Shamshera is exactly the film I was looking for. While growing up watching Hindi commercial cinema, I had an image of what a film hero should be doing. Shamshera allows me to do everything that I had imagined and it’s a very exciting project for me,” shared Ranbir Kapoor in a media interaction.