Farm laws: As pressure mounts, Dushyant offers to be mediator 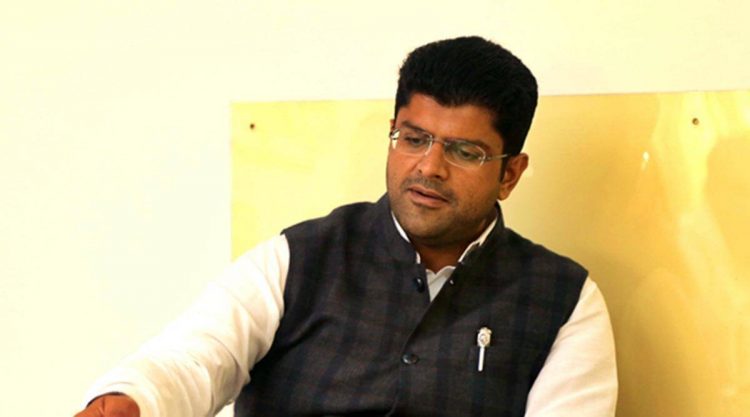 WITH PRESSURE mounting on the BJP-JJP government in Haryana over the farmers’ protests, Deputy Chief Minister Dushyant Chautala on Thursday offered to act as a mediator between the farmers and the Centre to resolve the standoff.

This came on a day a group of villagers used shovels to damage a temporary helipad in his constituency Uchana in Jind – one of the districts that has seen farmers gathering in protest against the three new farm laws – where they claimed Chautala was to visit later in the day. They also released videos of the helipad being dug up.

However, a leader from Chautala’s JJP denied any visit plans.“There was no official programme of the Deputy Chief Minister to go to Uchana today. Instead, he was addressing press conference here in Chandigarh. Then he flew to Delhi. Several times there are tentative programmes, like social engagements at a party worker’s place. The Uchana programme could have been one of those…,” he told The Indian Express.

Chautala, meanwhile, told reporters that the protesting farmers should talk with the government and reach a solution. “No solution can be reached without talks,” he said.

“When the Union government is making efforts in this regard, the 40 farmer unions who are leading these protests should also come forward and participate in talks for the betterment of farmers. I hope talks will be held in the next few days and that would lead to a positive outcome,” he said.

In reply to another question, he said, “Changes need to be made in the agriculture laws and in this regard written suggestions have been made to the Centre and the Centre also agreed to the same. The government is ready to include the guarantee of MSP in writing, to make amendments to Electricity Amendment Bill among other demands. If the Centre gives me responsibility to mediate on those changes that are not being included, I am ready to do the needful.”

Chautala’s statements came even as farmer unions continued to build pressure, raising anti-government slogans outside residences of senior BJP and JJP leaders in their respective constituencies.

The offer to mediate assumes significance as BJP leader and former Union minister Chaudhary Birender Singh – with whose family the Chautalas have engaged in political contests over the past few decades – has announced support to the protesting farmers. In fact, Singh sat on a dharna at Hisar on Thursday, which was organised by his Chaudhary Chhotu Ram Vichar Manch in support of the farmers. This came a week after he joined a similar dharna in Rohtak district.

The families of Chautala and Singh, both of whom claim to champion farmers’ causes, have fought electoral battles from Uchana Kalan assembly seat and Hisar parliamentary constituency for many years. Most recently, Chautala defeated Singh’s wife Prem Lata from Uchana in the October 2019 Assembly polls. Few months before that Birender Singh’s son and BJP candidate Brijendra Singh defeated Chautala from Hisar.

Singh’s open support to the protesting farmers may build pressure on Chautala as neither he nor his legislator mother Naina Chautala has joined any such protest until now.

Singh, however, is yet to get a warm response – there was thin attendance at Thursday’s dharna – largely because his MP son is yet to show up in favour. Brijendra Singh was part of a three-member panel of BJP MPs formed a few months ago to talk to the agitators. Birender Singh’s support to the agitation is being seen as an attempt to pacify the angry farmers, at least, in Hisar constituency where some khap groups have announced social boycott of both him and Chautala.