Home News Farmers across India have been protesting for months. Here's why

Farmers across India have been protesting for months. Here's why 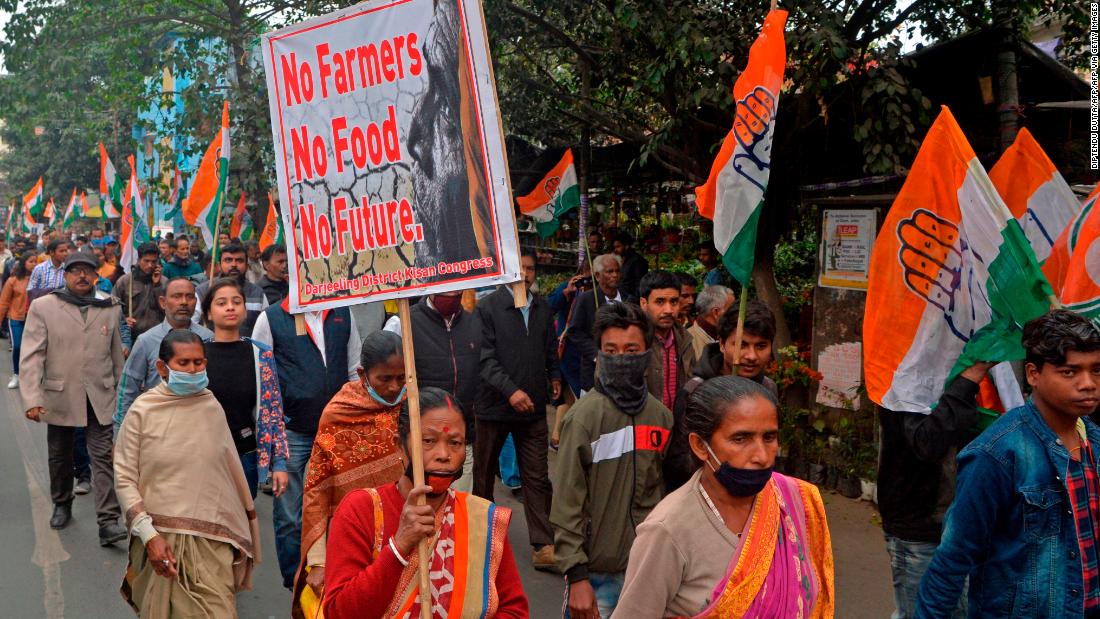 Large barricades erected by the police and topped with barbed wire stand a few hundred meters from the camp, preventing the farmers from encroaching any closer to the center of Delhi. At times, violence has broken out during demonstrations.

The farmers are fighting new farming laws passed last September, which they say will devastate their livelihoods. The government says the reforms are needed to modernize the country’s agricultural industry.

With negotiations between the government and the farmers’ unions at a standstill, the protests don’t appear to be ending anytime soon. Here’s what you need to know about the situation.

Why are the farmers protesting the new laws?

For decades, the Indian government has offered guaranteed prices to farmers for certain crops, creating a stable guide to make decisions and investments for the following crop cycle.

Under the previous laws, farmers had to sell their goods at auction at their state’s Agricultural Produce Market Committee, where they were guaranteed to receive at least the government-agreed minimum price. There were restrictions on who could buy, and prices were capped for essential commodities.

Three new laws, initiated by the government of Prime Minister Narendra Modi, dismantled this committee structure, instead allowing farmers to sell their goods to anyone for any price.

Modi says this gives farmers more freedom to do things such as sell directly to buyers without a middle man, and sell to other states or large grocery chains.

But many farmers argue the laws will allow big companies to drive down prices. While farmers could sell crops at higher prices if the demand is there, conversely, they could struggle to meet the minimum price in years when there is too much supply.

Why is this a political issue?

This isn’t the first time that large protests have rocked India, the world’s largest democracy — but this time, it poses a unique challenge for Modi.

Agriculture is the primary source of livelihood for about 58% of India’s 1.3 billion residents, and farmers are the biggest voter bloc in the country, making farming a central political issue. Angering the farmers could see Modi lose a significant chunk of votes at the next general election in 2024.

Modi and his Bharatiya Janata Party (BJP) have tried to win over farmers with a number of policy proposals in recent years. In 2014, the BJP said all crop prices should be fixed at a minimum of 50% higher than production costs. And in 2016, Modi set a target of doubling the income of farmers by 2022.

“These reforms have not only served to unshackle our farmers but also given them new rights and opportunities,” Modi said in November.

When did the protests start?

The mass protests began soon after the laws passed in September.

In November, infuriated farmers drove in tractor conveys from around India to set up multiple blockades at New Delhi’s borders. Thousands marched from other nearby states to the city, where violence soon erupted, with police firing tear gas and water cannons to stop them from entering the capital.

The protests continued throughout December, with supporters across the country participating in labor and hunger strikes. At times, demonstrations swelled to more than 100,000 people on Delhi’s outskirts — though largely peaceful, there were occasional flare-ups of violence and scuffles with police.

The government has faced criticism for how it has handled the protests, particularly the violent clashes between farmers, their supporters and Delhi police during a tractor parade on Republic Day in January.

In a joint statement after the confrontation, 16 opposition parties accused Modi and the BJP of using excessive force, and being “arrogant, adamant and undemocratic in their response.”

At the camps on the Delhi border, security forces keep watch from the outer edges — they have not tried to clear the camp, likely because it would be politically unpopular.

According to Samyukta Kisan Morcha, the umbrella body representing protesting farmers, at least 147 farmers have died during the protests due to causes including suicide, road accidents and exposure to cold weather. Authorities have not given an official figure on protester deaths.

Has there been any progress with negotiations?

Government leaders have failed to reach any agreement or compromise with leaders of more than 30 farmers’ unions despite months of negotiation.

Officials suggested amendments to the three laws in December, including a proposal that state governments would be able to impose fees on private firms — but farmers rejected these overtures, alleging the government was “insincere” in its efforts.

In mid-January, India’s Supreme Court temporarily suspended the three laws, in the hopes the farmers might “come to the negotiating table with confidence and good faith.”

Several days later, the government announced that it was willing to suspend the laws for another 12 to 18 months, while it worked with farmers’ unions to seek a long-term compromise.

But protests have continued, with some farmers vowing not to leave until the laws are fully repealed.

The past week alone has seen farmers block highways and hold rallies in several states, with police detaining a number of protesters.