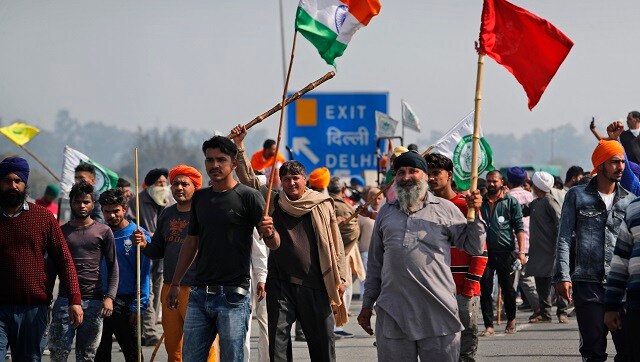 Peaceful protests were held from 12 pm to 3 pm on Saturday in several states including Punjab, Haryana, Rajasthan, Karnataka, Maharashtra, Tamil Nadu, and Telangana

“We have given time to the government till 2 October to repeal the laws. After this, we will do further planning. We won’t hold discussions with the government under pressure,” a report in Economic Times quoted the Bharatiya Kisan Union (BKU) leader as saying while addressing farmers following the chakka jam protests.

Tikait also asserted that the protesting farmers, who are demanding the repeal of the contentious farm marketing laws, “will stay put till 2 October” in the perseverance of their demand.

“We will sit here till 2 October,” said Tikait, who is camping with his supporters at the Ghazipur protest site on the Delhi-Meerut highway since November.

The chakka jam, during which farmers blocked national and state highways in various states, was announced by the Samyukta Kisan Morcha (SKM), a joint body of around 40 farmers’ unions that has been at the helm of the over two-month-long protests against the contentious farm laws at Delhi’s borders.

The chakka jam took place from 12 pm to 3 pm in states like Punjab, Haryana, Rajasthan, Karnataka, Maharashtra, Tamil Nadu, Telangana and the Union Territory of Jammu and Kashmir.

Tikait said that the decision to call off the protest in Uttar Pradesh and Uttarakhand was taken because the organisers had received inputs about “miscreants seeking to disrupt peace”.

“Nobody can touch the farmlands, the farmers will protect it. Both farmers and soldiers should come forward for it,” Tikait added.

Interacting with security personnel who were on the other side of the barricading, he reportedly said, bowing his head and folded hands, “My pranaam (a respectful salutation) to you all. Now you all will protect my farms.”

Meanwhile, around 50 people were detained near the Shaheedi Park in central Delhi for allegedly holding a protest in support of the chakka jam.

Nailing the lie of Modi government in parliament that farmers protests are confined to just one state, lakhs of kisans all over the country observed the 12-3pm ‘ chakka jam’ today.
Major national highways were peacefully blockaded all across India.#IndiaSupportsChakkaJaam pic.twitter.com/Han79nBKGq

Despite the SKM saying that no protest will be held inside Delhi, the Delhi Police had tightened security at all the city’s borders ahead of the chakka jam on Saturday. Additionally, thousands of security personnel, including those from paramilitary forces, were deployed, PTI reported. Forces were also deployed at important junctions across the National Capital, including the Red Fort and the ITO, which witnessed violence on 26 January during the farmers’ tractor parade. One protester had died and over 500 police personnel were injured in the episode of violence. On Saturday, police said that drone cameras were also being used to keep a tight vigil at protest sites. Additionally, personnel were also monitoring content on social media “to keep a watch on those spreading rumours against the force”, PTI reported. Multilayered barricades, barbed wires and nail-studded roads at the protest sites are also part of the precautionary measures taken by the police force.

The agitating farmers are blocking national and state highways. Heavy security has been deployed in and around National Capital to ensure violence doesn’t break out.@aparnadwivedi_ share more details with @ridhimb pic.twitter.com/uRi2x7T5Rn

At least nine stations of the Delhi Metro were also shut in the duration of the chakka jam. Entry and exit facilities at the Mandi House, ITO, Lal Quila, Jama Masjid, Janpath, Central Secretariat, Khan Market, Nehru Place, Vishwavidyalaya stations were shut on Saturday afternoon and reopened later in the evening.

The DMRC tweeted at 3.54 pm that normal services had resumed.

Entry/exit gates of all stations are open.

The Ministry of Home Affairs ordered the suspension of internet services at Singhu, Ghazipur and Tikri borders of Delhi for 24 hours till midnight on Saturday, in the view of the chakka jam.

Apart from the three sites, internet services will remain suspended in their adjoining areas too till 23.59 hours on 6 February.

The decision has been taken to ‘maintain public safety and averting public emergency’ under Temporary Suspension of Telecom Services (Public Emergency or Public Safety) Rules 2017, a home ministry official was quoted as saying by PTI.

Earlier, the suspension of internet services was ordered at Singhu, Ghazipur, and Tikri borders and their adjoining areas from 11 pm on 29 January and was effective till 11 pm on 31 January, which was further extended till 2 February.

Internet services were also suspended in some parts of Delhi after the violence broke out on 26 January.

Punjab and Haryana: Raising slogans against the Centre, many farmers parked their tractor-trailers or squatted in the middle of roads in Punjab and Haryana, blocking several highways, including the Chandigarh-Zirakpur, Amritsar-Pathankot, Tarn Taran-Kapurthala, Ferozepur-Fazilka, Muktsar-Kotkapura, Bathinda-Chandigarh, Ludhiana-Jalandhar, Panchkula-Pinjore and Ambala Chandigarh highway.

Rustic local songs blared from speakers and people perched atop truck-tractors hoisted the Tricolour on the KMP Expressway, PTI reported.

Biscuits and fruits were distributed to the protesting farmers sitting on the road.

Civilians arriving at the protest site with their vehicles were politely informed about the protest and requested to turn back.

“We don’t want to create any inconvenience for the people. That is precisely the reason why the call given was for three hours only. Security forces have been blocking our passage for so many days, we expect the ‘aam aadmi‘ to co-operate with us for some hours at least,” Ajit Ahluwalia (29) from Haryana’s Hisar was quoted as saying by PTI.

Farmers parked their tractor-trailers in middle of roads and raised slogans against the Centre during a three-hour-long chakka jam agitation in Punjab and Haryana. Women took part in the stir in sizeable number at several places, PTI reported.

The three-hour-long agitation was announced to register protest against the internet ban in areas near their agitation sites and alleged harassment meted out to farmers by the authorities, among other issues.

Farmer leaders claimed that their three-hour stir remained peaceful in both states.

Police had stepped up security and had made all arrangements for traffic diversion, said officials, adding adequate security personnel were deployed in Punjab and Haryana.

Protests were also held at Shambhu near Ambala and at many toll plazas in both states.

Protesting farmers said ambulances and school buses were allowed during the chakka jam.

Farmers carried placards with slogans ‘Jai Jawan, Jai Kisan‘ and ‘Kisan Ekta Zindabad’. They also raised slogans against the Centre for not acceding to their demand of repealing the farm legislations.

In the morning, farmers started assembling at the protest sites in both states. They parked tractor-trailers and other vehicles on roads.

Women took part in the agitation in sizeable number at several places, including in Punjab’s Sangrur and Ludhiana.

“The government should repeal the three laws as they are not in the interest of the farming community,” said a protester at the Shambhu border.

Maharashtra: Around 40 protesters were detained for holding a chakka jam in Karad city of Maharashtra’s Satara district. ‘Rasta roko’ protests were staged in Karad and Kolhapur cities as well.

At least 40 protesters, including senior Congress leader Prithviraj Chavan’s wife Satvasheela Chavan and farmers, were detained by the police for holding the protest on a busy road at Kolhapur Naka in Karad in western Maharashtra this afternoon, PTI reported.

In Kolhapur, Swabhimani Shetkari Sanghatna leader Raju Shetti led a protest against the farm laws. Shetti and some farmers were detained for staging a rasta roko at Dabholkar Chowk in the afternoon. They were released later.

.@INCMaharashtra workers hold a protest in support of farmers across the country that have been fighting for their rights for over 70 days now. #IndiaSupportsChakkaJaam pic.twitter.com/bsywU8TTnJ

Karnataka: Farmers also blocked highways in different parts of Karnataka to show their solidarity, after a call given by various farmers’ associations led by Kuruburu Shanthakumar. A few pro-Kannada organisations too came in support of the agitators. The demonstrations were held in Bengaluru, Mysuru, Kolar, Koppal, Bagalkote, Tumakuru Davangere, Hassan, Mangaluru, Haveri, Shivamogga and Chikkaballapura and protesters courted arrest in some parts of the state.

Rajasthan: Farmers blocked roads at several places across Rajasthan as well on Saturday. Farmers at many places including Ganganagar, Hanumangarh, Dholpur and Jhalawar in the state blocked the highways and main roads and held demonstrations. However, there is no news of any untoward incident so far, PTI reported. The Rajasthan Congress has also supported the call. In a tweet, Congress state president Govind Singh Dotasara said the party supports the protesting farmers. “The Rajasthan Pradesh Congress Committee supports the farmers’ unions call to block national and state highways from 12 noon to 3 pm today. All Congressmen are requested to take necessary steps to make this blockade successful and ensure it is peaceful,” Dotasra said.

Tamil Nadu: Leading an agitation in Chennai by raising slogans against the Centre and farm laws, the Tamil Nadu All Farmers’ Association president PR Pandian said the protest was for seeking justice. The protests in Tamil Nadu was part of the pan India stir and “this is for seeking justice for farmers, this is not for political purposes or to inconvenience the general public,” Pandian told reporters. Urging scrapping of farm laws, he alleged Prime Minister Narendra Modi worked for the interests of corporates and his government barred farmers from entering Delhi. “If PM Modi does not permit farmers to enter Delhi, farmers would not allow him to visit Tamil Nadu,” he said. Pandian said the farmers’ protest including today’s chakka jam is for “fair reasons while the Centre only favoured corporates and not farmers”. Demanding complete removal of barricades, he wanted the government to provide amenities to farmers and not “harass farmers who voted for Modi”. The Centre was using the police against them and it is condemnable, he added.

Congress workers from @INCTamilNadu support farmers by taking part in protest for the rights of our annadata. #IndiaSupportsChakkaJaam pic.twitter.com/6clE3T2ENS

Telangana: Farmers and leaders of various political parties held a chakka jam in various parts of Telangana. Congress and Left party workers staged dharnas on various highways across the state.

However, the police intervened and cleared the traffic. Police said several people were taken into preventive custody.

Ahead of the nationwide ‘chakka jam’, Congress leader Rahul Gandhi said the peaceful ‘satyagraha‘ of the ‘annadatas‘ is in the national interest as the farm laws are “harmful” for the country.

Party general secretary Priyanka Gandhi Vadra also slammed the government over the farmers issue by posting on Twitter a picture of the multi-layered barricading at one of the farmer protest sites.

“Why are you scaring us with the wall of fear?” she tweeted along with the picture.