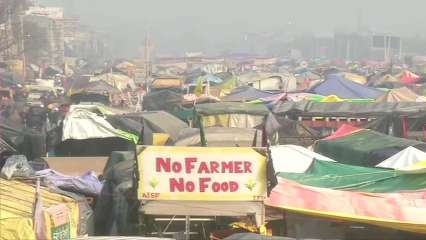 A 65-year-old farmer committed suicide at the Singhu border, the protest site for agitating farmers, on Wednesday. This happened as the farmers’ agitation against the new farm laws has entered the 21st day.

The deceased has been identified as Baba Ram Singh of Singhra village in Nissing area of Haryana’s Karnal district. He had recently joined the farmers’ protests.

Baba Ram Singh, the priest of a Gurdwara from Haryana earlier on Wednesday shot himself dead at the Singhu border protest site, one of the epicentres of ongoing agitation against the farm laws.

The farmer left a suicide note which states that he couldn’t see the ordeal of farmers who are sitting on the outskirts of the national capital protesting against the recently-passed farm laws.

Badal also appealed to the Central government not to let the situation deteriorate any further and repeal the three agriculture laws.

Thousand of farmers, mainly from Punjab and Haryana, have been protesting for the last 21 days at several border points of Delhi demanding scrapping of the Centre’s three new farm laws.

The Centre has, so far, held five rounds of talks with the farm union leaders in the past few weeks to break the deadlock and allay concerns of farmers about the new farm laws enacted in September but failed to end the impasse.

Last week, farmer leaders had rejected a government proposal to amend the laws, asserting that they would intensify their agitation.

The draft proposal offered to give a ‘written assurance’ to the farmers that the existing Minimum Support Price (MSP) regime for crop procurement will continue.