Farmers protest at Delhi’s borders ahead of Kisan Diwas 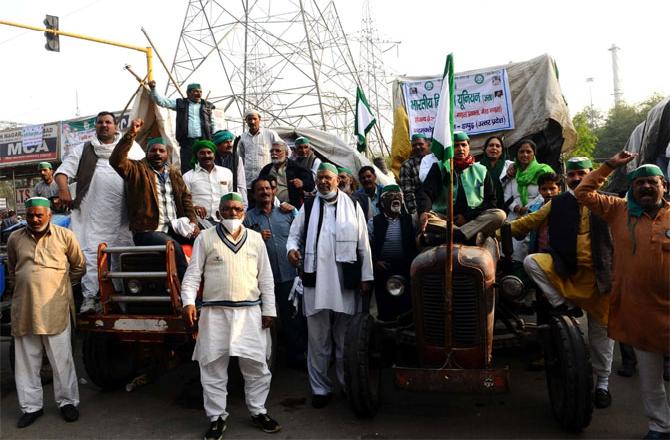 Ahead of Kisan Diwas, farmer leaders are expected to meet on Tuesday to discuss a plan of action as thousands gathered at protest sites on Delhi’s borders with Haryana and Uttar Pradesh. Farmers are protesting centre’s new agricultural laws for nearly a month amid the cold wave sweeping the national capital. Efforts are underway by the unions to draw support from farmers in other states like Bihar for their demand to enact a law assuring Minimum Support Price (MSP). India observes Kisan Diwas or National Farmers’ Day on December 23, in memory of Chaudhary Charan Singh, the great kisan leader and the country’s fifth prime minister.

On Monday, the farmers held a relay hunger strike at various protest sites in batches of 11. In the letter to 40 farmer union leaders, the Joint Secretary in the Union Agriculture Ministry, Vivek Aggarwal, on Sunday asked them to specify their concerns over its earlier proposal of amendments in the laws and choose a convenient date for the next round of talks so that the ongoing agitation could end at the earliest.

Owing to the ongoing agitation, the Delhi Traffic Police said the Singhu, Auchandi, Piau Maniyari and Mangesh borders are closed. It advised commuters to take alternative routes through the Lampur, Safiabad Saboli and Singhu school toll tax borders. The police said that as traffic has been diverted from Mukarba and the GTK road, people are suggested to avoid Outer Ring Road, the GTK road and National Highway 44.

Those travelling to Haryana can go through the Jharoda (only single carriageway), Daurala, Kapashera, Badusarai, Rajokri NH-8, Bijwasan-Bajghera, Palam Vihar and Dundahera borders. According to the traffic police, Tikri and Dhansa borders are also closed for traffic but the Jhatikara border was open only for two-wheelers and pedestrians. At the Chilla border, the Delhi to Noida carriageway is open for traffic. The Noida to Delhi carriageway is, however, closed. The Ghazipur border was also closed for traffic movement.

However, the protesting farmers have expressed apprehension that the new laws would pave the way for eliminating the safety cushion of MSP and do away with the mandi system, leaving them at the mercy of big corporates. The government has repeatedly asserted that the MSP and mandi systems will stay and has accused the opposition of misleading the farmers.