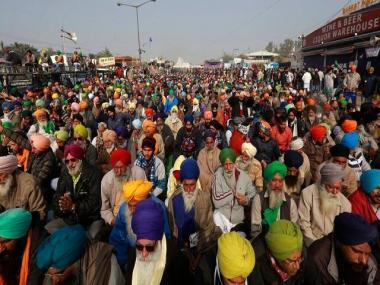 Singh said that the government was holding talks with some of the protesting farmers with full sensitivity and hoped that the agitations would soon come to an end.

Protesting farmer unions deferred a decision on the central government’s offer for fresh talks to Wednesday, even as Union Agriculture Minister Narendra Singh Tomar on Tuesday expressed the hope that they will soon resume the dialogue to resolve the impasse over the new agri laws.

A group of protesters showed black flags to Haryana chief minister Manohar Lal Khattar and even tried to block his convoy in Ambala City, as demonstrations were held in several states in support of the thousands of farmers, mostly from Punjab and Haryana, who are on a sit-in since 26 November on the borders of the National Capital demanding the repeal of the three laws.

In Uttar Pradesh, a group of farmers who were heading to join the protesters clashed with police when they were stopped at Rampur-Moradabad toll plaza.

While a couple of farmer unions have been on a sit-in on the Delhi-Noida border against the farm laws, a group of protesters, mainly residents of Jewar and Dadri in Greater Noida, came out on roads in support of the laws and was stopped by police at Mahamaya Flyover.

Farmers camping at UP Gate on Delhi-Ghaziabad border on Tuesday blocked all 14 lanes of the National Highway 9 for eight hours from 9 am and also allegedly manhandled a journalist and photographer.

In Kerala, the opposition Congress-led United Democratic Front (UDF) took out a march to the Raj Bhavan to express solidarity with the protesting farmer unions while Governor Arif Mohammed Khan declined approval for a special session of the state assembly on Wednesday proposed by the CPI(M)-led Left Democratic Front Government to discuss and pass a resolution against the three contentious central farm laws.

Addressing a press conference at Delhi’s Singhu Border, farmer leader Kulwant Singh Sandhu said that 32 farmer unions from Punjab held a meeting on Tuesday and discussed the next course of action.

The farmer leader said that a meeting of farmer leaders from across India would be held on Wednesday where a decision on the government’s talks offer will be taken.

In a letter to 40 union leaders, the Joint Secretary in the Union Agriculture Ministry, Vivek Aggarwal, had on Sunday asked protesting farmer leaders to specify their concerns over its earlier proposal of amendments in the laws and choose a convenient date for the next round of talks so that the ongoing agitation could end at the earliest.

The sixth round of talks on 9 December was cancelled following a deadlock with the farmer unions refusing to budge from their demand for repealing the three laws.

Agriculture Minister Tomar said on Tuesday he is hopeful that protesting unions would soon complete their internal discussions and resume talks with the government to resolve the crisis.

He met two more peasants’ bodies from Delhi and Uttar Pradesh that extended support to the legislation.

“Representatives of different farmers’ bodies had come to tell that the laws are good and are in the interest of farmers. They had come to urge the government not make any amendments to the laws,” Tomar said after meeting the two groups.

“I am hopeful they (protesting farmers’ unions) will soon complete their internal discussions and come forward for talks. We will be able to find a solution successfully,” the minister said.

However, Sandhu accused the government of creating “dummy and fake organisations that don’t have any past” to undermine their agitation.

The farmer leader said that they would also write to Britain MPs, urging them to press their Prime Minister Boris Johnson not to attend India’s Republic Day celebrations on January 26. Johnson will be the chief guest at the event next month.

At the press conference, Sandhu said that farmer leaders will observe “Shaheedi diwas” from December 23-26. Protesting unions have already given a call to halt toll collection on highways in Haryana from December 25 to 27.

Seeking President Ram Nath Kovind’s intervention for withdrawal of the three farm laws, the Congress said a memorandum signed by two crore farmers would be handed over to him on December 24 by a party delegation led by Rahul Gandhi.

The Congress has been supporting the farmers agitation and seeking the withdrawal of the Central farm legislations. A delegation of opposition leaders, including Rahul Gandhi, had met the president with the same demand a few days ago.

The party’s Uttar Pradesh unit said it will hold a statewide protest across Uttar Pradesh in support of the farmers’ agitation on Wednesday marking the birth anniversary of Prime Minister Chaudhary Charan Singh.

The All India Trade Union Congress (AITUC) and its associate unions said they will observe December 23 as “Skip Lunch” day to express solidarity with the farmers.

Earlier in the day, Tomar asserted that the new farm reform laws will herald a new era in Indian farming and said the government is still willing to continue talks with protesting unions on all contentious issues.

“The Government has had many rounds of talks with farmer unions and is willing to continue the dialogue on contentious issues, clause by clause, with an open mind,” an official statement said.

Tomar, along with Food Minister Piyush Goyal and Minister of State for Commerce Som Parkash, is holding discussions with 40 protesting unions.

In Maharashtra, farmers protested outside the office of Mumbai suburban district collector demanding the withdrawal of the farm laws. The protest was supported by the ‘Prahar’ organisation, headed by state minister Bacchu Kadu.

A group of farmers from the state has already left for Delhi to support the peasants.

Meanwhile, social media giant Facebook said Kisan Ekta Morcha’s page had been taken down after its automated systems found increased activity and flagged it as spam, and that the page was restored in less than three hours.

Facebook had faced criticism from various quarters after the page – which is run by a farmers’ collective that is participating in the stir – was taken down on Sunday evening.

“As per our review, our automated systems found an increased activity on the (Kisan Ekta Morcha) Facebook page and flagged it as spam, which violates our Community Standards. We restored the page in less than three hours when we became aware of the context,” a Facebook spokesperson said.