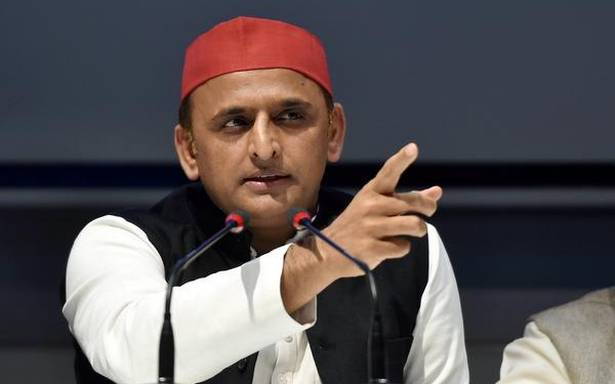 Samajwadi Party (SP) president Akhilesh Yadav on Monday said the police were preventing him from travelling to Kannauj to attend a scheduled programme in support of farmers.

Mr. Yadav, who sat on a dharna on the street against the security cordon, has been detained by the police.

The SP chief said that several of his party’s leaders and workers were also detained across Uttar Pradesh to prevent them from leading a march in support of the protesting farmers.

A huge posse of policemen was deployed outside Mr. Yadav’s official residence at Vikramaditya Marg in Lucknow. “My vehicles have also been seized by police,” he said.

“This undemocratic act of the State government is a violation of my constitutional right. As a Member of Parliament, this is also a violation of my special rights,” Mr. Yadav said in a letter to the Lok Sabha Speaker, seeking intervention.

“Samajwadi Party (SP) chief Akhilesh Yadav was to visit Kannauj for a programme, but the Kannauj district magistrate did not give permission for it. Hence, the portion of the Vikramaditya Marg leading to the SP office has been sealed,” Station House Officer (SHO), Gautampalli, Chandrashekhar Singh said.

“This is an undemocratic move by the state government,” SP national spokesperson Rajendra Chaudhary said reacting to the sealing of the road leading to the party’s office here.

“The government is feeling afraid that Akhilesh Yadav is going to participate in the ‘Kisan Yatra.’ Peaceful demonstration is the democratic right of every individual, and the government is adamant on violating it,” he said.

SP MLC Rajpal Kashyap along with other party leaders staged a protest against the administration’s move, but were removed by police.

Mr. Chaudhary also claimed that the BJP government in Uttar Pradesh is stopping SP workers in every district of the State from holding rallies in support of farmers.

In a tweet, the SP said, “The BJP government is afraid of the ‘Kisan Yatras’, which are being held against the injustice done to farmers and the anti-farmer laws. Hence, to stop the yatras, it has unleashed atrocities on ‘samajwadis’ The police are calling SP workers to police stations and also going to their houses to stop them.”

“This is highly condemnable. Farmers and youths will give an answer to the government,” it said.

On Sunday, the SP had said that it will organise farmer rallies in all districts of Uttar Pradesh from December 7, beginning with Kannauj. The SP is among the several political parties, including the Congress, the Aam Aadmi Party and the BSP, that are supporting the nationwide strike called by farmers.

“Under the BJP’s rule, farmers have faced injustice. The BJP is selling of ‘mandis’ and the farmers are not even getting a minimum support price for paddy. The prices of fertilisers and pesticides have gone up. The BJP government has shown an insensitive attitude towards farmers,” the SP said in the statement on December 6.