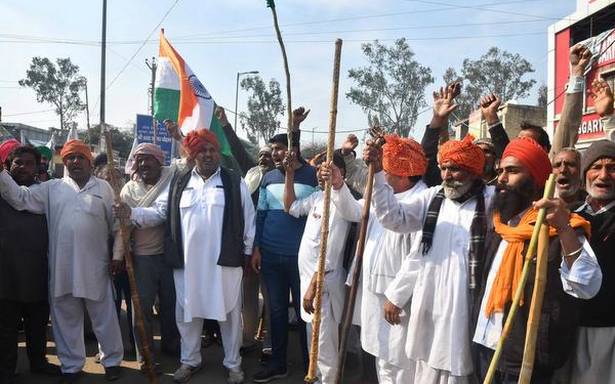 Farm unions say they are open to resuming talks on the three farm laws, but accuse the government of offering dialogue on the one hand while harassing farmers on the other, by cutting off mobile Internet, threatening eviction and turning a blind eye to violence from locals.

With new groups of farmers from U.P., Haryana and Punjab streaming into the border protest sites again, several union leaders say they expect to be able to negotiate from a position of renewed strength.

The Union Home Ministry on Saturday ordered the suspension of Internet for two days at Singhu, Tikri and Ghazipur, the three main protest sites on Delhi’s borders, where tens of thousands of farmers have been camped for over two months. The U.P. Police and local administration have attempted to evict protestors from the Ghazipur site, while local residents, backed by BJP leaders, clashed with protesting farmers in Singhu on Friday.

“It is the government which has attempted to derail the debate by inciting violence and communalising the issue,” said Mahila Kisan Adhikaar Manch Kavitha Kuruganti.

“The government says it wants a dialogue, but it is trying to weaken the farmers in so many ways, cutting off our communications, our water and power, setting up local people against us. We have to deal with that first,” Ms Kurugunti said adding that union leaders have not had meetings about resumption of talks because they have been preoccupied with these urgent matters.

“We have never closed the door on talks. We have come all the way to Delhi in order to talk to the government,” she said.

Punjab leader Jagmohan Singh, who heads one of the largest factions of the Bharatiya Kisan Union, said the unions are interested in resuming negotiations if the Centre is open to their demands.

“Our doors are open 24 hours. If the government proposals are positive, we are ready to talk. My assessment is that the government will retreat, but no one has approached us yet,” he said. He added that unlike earlier, there has not been any informal outreach from BJP leaders or Union Ministers to the unions.

Krantikari Kisan Union president Darshan Pal, who has been a key player in the talks with the government, as well as in linking the Punjab unions to the national movement, said the renewed mobilisation of protestors from several States would strengthen the unions’ position.

“Over the last two days, new people are coming in to all the borders. It is a response to Tikait’s appeal, as well as to the oppression that our people are facing. So now the government may be feeling the pressure,” he said. “Within a day or two, when there are more people, then we will be in a better position, and it will be more effective to resume talks. We will think of sending a proposal then,” he added.

He also warned of serious consequences if the police stand by when locals attack protestors. “The BJP and RSS are inciting the local people, who are attacking peaceful farmers. If the police don’t take action, we will have to take steps to defend ourselves. Then farmers will be forced to respond in the same language,” he said.

The unions observed a day of fasting on Saturday, which was Mahatma Gandhi’s death anniversary. “The purpose was to restore goodwill, similar to the Sadbhavana (goodwill) Yatra we undertook after Republic Day,” said Darshan Pal.

X
Ghazipur takes centrestage as farmers from Uttarakhand, western UP join sit-in; …IndiaThe farmers held a day-long fast on Saturday, paying tribute to Mahatma Gandhi on his death anniversary, as the stir appeared to regain momentum after…
close