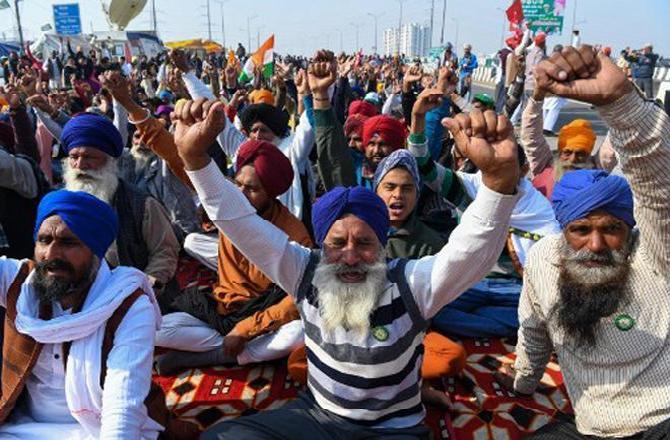 The Congress on Friday hit back at Prime Minister Narendra Modi, saying he is busy in giving clarifications on television on the three farm laws against which thousands of farmers are protesting for the last one month on the borders of the national capital, braving chilly winter conditions.

In a statement, Congress spokesperson Randeep Singh Surjewala said, “In this bone chilling and spirit shattering cold, farmers have been pleading for justice at the doors of Delhi for the past 30 days.”

Surjewala said that 44 farmers have died while fighting this ordeal, but the Modi government is busy in the servility of a handful of crony capitalists and has shown no empathy.

The Congress leader said that Prime Minister Modi and the BJP government are working on the policy of making the protesting farmers ‘exhaustibly tired so they are forced to flee’.

“The Prime Minister is giving clarifications on television and his ministers are offering excuses through letters, but the fact remains that he is busy in the servility of a handful of crony capitalists,” he alleged.

Surjewala further stated that the government has become the enemy of the farmers.

“The bitter truth is that it is taking shelter behind political dishonesty, slyness and dramatics and is not at all interested in solving the problems of the farmers. The Prime Minister who dug roads, attacked the farmers with water cannons and lathi charged them is today indulging in the drama of ‘Samman Nidhi’,” he said.

Tearing into the Prime Minister’s claim during the Kisan Samman programme, Surjewala said that as per the 2015-16 agriculture census, a total of 14.64 crore farmers in the country undertook cultivation in 15.78 crore hectares of land.

“The Modi government launched the ‘Kisan Samman Nidhi Yojna’ in December 2018 in which it was stated that Rs 6,000 will be deposited into the bank accounts of all the farmers of the country in three instalments. Under this scheme, in the year 2018-19, instead of Rs 88,000 crore, only Rs 6,005 crore was deposited,” he said.

Surjerwala said, “By transferring Rs 18,000 crore today, the Prime Minister is again unsuccessfully trying to clean the stains of these three black laws.”

Firing salvos at the government, the Congress leader said, “Why the benefits of the Kisan Samman Nidhi are being denied to 5.40 crore farmers? Why these farmers have been kept out of the ambit of this scheme? Why out of 14.64 crore farmers, only 9.24 crore farmers are covered under this scheme?”

“Modi Ji, it is a matter of deep anguish that the farmers whom you are treating with cruelty and apathy, are the same people who brought you to this throne and this position of glory.

“Today, the BJP is branding these farmer brothers as terrorists, parasite, ‘tukde-tukde’ gang, misguided gang and Khalistanis. It is shameful that the Minister of Agriculture has gone to the extent of calling them political puppets in his letters,” Surjewala said, as he asked the government to repeal the farm laws and apologise to the farmers.