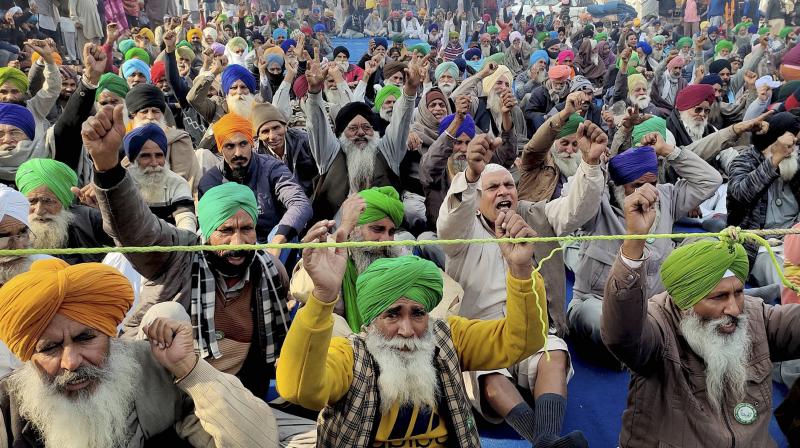 New Delhi: Two days ahead of the Supreme Court’s hearing on the ongoing farmers’ agitation, a farmers’ union on Saturday urged the top court to withdraw the three members of the committee set up by it on January 12 to resolve the impasse over the three contentious farm laws and appoint members who are impartial, not aligned with any political party and have the trust and goodwill of the farmers.

The plea by Bhartiya Kisan Union (Lokshakti) also sought the presence of a former top court judge on the reconstituted committee.

The plea seeks the removal of three members — Dr Parmod Kumar Joshi, Ashok Gulati, and Anil Ghanwat — in its reply to the Centre’s application filed on January 11 seeking to stop the agitating farmers from taking out a tractor kisan rally at Delhi’s Ramlila ground on Republic Day.

Bhupinder Singh Mann, national president of Bhartiya Kisan Union and All India Kisan Coordination Committee, has already recused himself from the committee stating that he cannot go against Punjab and its farmers agitating against the laws. The BKU (Lokshakti) is part of the Kisan Ekta Morcha heading 40 farmers unions holding protests at Delhi borders for over 50 days.

Seeking the removal of three members, BKU (Lokshakti) has said in its petition that all three of them have in no uncertain terms supported the three farm laws saving that they have opened up opportunities for the farming sector and must be implemented.

Referring to the support to three farm laws by Dr Joshi, Mr Gulati and Mr Ghanwat, the reply filed by advocate A.P. Singh on behalf of BKU (Lokshakti) says that their presence on the committee is in the teeth of the two principles of natural justice — “Nemo judex in causa sua” meaning that no one should be made a judge in his own cause, and “Audi alteram partem” — the rule of fair hearing.

“It is important to mention here with great regret that the principle of natural justice is going to be violated by making these persons as members of the committee… How they will hear all farmers on equal parameters when they have already supported these laws,” the petition said.

The top court by its January 12 order had suspended the implementation of three farm laws and had set-up a committee of four experts on agriculture to hear all including those opposed to or supporting the farm laws, government and other stakeholders and submit its report with recommendations to the court.

On Delhi Police seeking injunction against the farmers’ proposed tractor rally, the reply says that the New Delhi district area where Republic Day parade takes place is already under prohibitory orders under Section 144 of the CrPC that bars the gathering of more than five people.