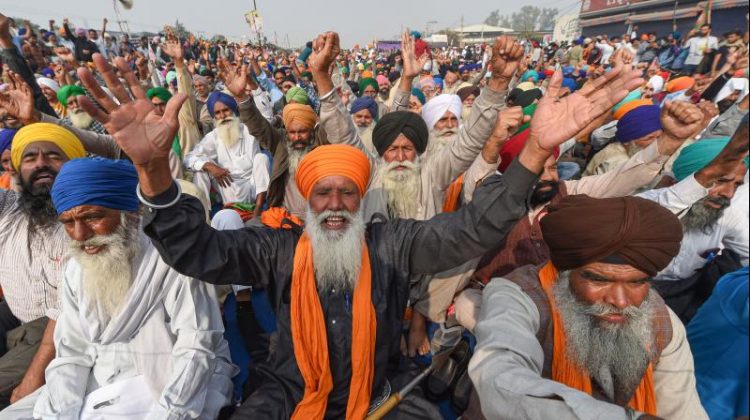 New Delhi: Amid the ongoing impasse between the farmers and the Centre, the farmers’ unions have announced a 24-hour relay hunger strike on Monday across all protest sites. The unions also decided to block toll collections at highways in Haryana for three days from December 25. They have issued a call to oppose Prime Minister Narendra Modi’s “Mann ki Baat” programme to be relayed next Sunday, November 27.
Speaking at a press conference in Kolkata, Union home minister Amit Shah said, however, that there had been “progress” in the talks with the farmers. He said the next round of discussions with the farmers’ unions is likely to be held on Monday or the day after. The Centre has held many rounds of talks with the unions, but they have ended inconclusively.

At the Delhi-Haryana border, the farmers’ leaders refused to budge and said they would intensify their stir if their demands are not immediately met. Swaraj India chief Yogendra Yadav said a team of 11 members at the protest sites will observe a hungerstrike on Monday. He urged all those demonstrating against the laws across India to observe a day-long fast at their respective protest sites. Bharatiya Kisan Union leader Rakesh Tikait urged people to skip a meal on “Kisan Diwas” on December 23.

The unions have also decided to write to the NDA allies, urging them to oppose the Centre’s stance and request a rollback of the three farm laws. “If the government’s allies refuse to do so, protests would be held against them as well,” Mr Tikait said.
As Delhi recorded its coldest morning this season on Sunday, with the mercury dipping to 3.4 degrees Celsius, thousands of farmers protesting at the national capital’s borders continued with their agitation and were firm on their demand to get the three farm laws repealed. Some farmers also started returning home, to be replaced by their family members at the protest sites.

As the protests against the new laws entered the 25th day, Prime Minister Narendra Modi on Sunday made a surprise visit to Delhi’s Gurdwara Rakabganj and paid tribute to Guru Tegh Bahadur for his supreme sacrifice. Farmers in different parts of India also observed “Shradhanjali Diwas” with prayer meetings to pay homage to those who had lost their lives in the ongoing protests against the three farm laws.

“Those who have died during the protest against the farm laws are the martyrs of Punjab. After getting free from the protest, we will also fight for compensation and government jobs for the families of the martyrs,” said Dharminder Pashore, Lehra block president of BKU (Ugrahan). So far, 24 farmers have died in the last three weeks during the agitation at the capital’s four key border points — Singhu, Tikri, UP Gate and Chilla. Seven farmers reportedly died due to the cold and heart attacks at the Tikri border, and six others passed away at the Singhu border. Nine farmers died in road accidents on their way to the protest venues from their villages or while returning home from the protest sites.

One of the leading farmers’ groups playing a major role in the protests has been accused of accepting foreign funds without proper clearances. The Bharatiya Kisan Union (Ugrahan), the largest and most dominant in Punjab which has a huge base, has been issued a warning by a bank and been told to get the mandatory registration done.

Sukhdev Singh Kokri Kalan, its general secretary, said he was called by officials of Punjab and Sindh Bank in Punjab’s Moga district and told about a mail from the forex department. The group had got Rs 8 lakhs to Rs 9 lakhs in the past two months, which was cited by bank officials, Mr Singh said. The money is usually sent from Punjabis living abroad who regularly donate for social causes. The group, Mr Singh added, will take a call on its response once they get something in writing from the bank.

Over the last years, the NDA government has tightened implementation of the laws on foreign donations and cracked down on many NGOs for violation of rules. Punjab CM Amarinder Singh has said, however, that the use of tax laws against farmers’ groups was the Centre’s ruse to break the farmers’ protests.

At the Singhu border, nurses and medical staff from Punjab joined the protesters to support the agitation and to provide medical assistance. Ludhiana-based nurse Harshdeep Kaur: “We are here to support farmers but we also want to serve them if they are ill. Medical treatment is the basic requirement for everyone because of the chilly weather.”

In New Delhi, Prime Minister Modi prayers at the gurdwara, for which no special police arrangements were made or traffic barriers put up that would impede the movement of ordinary citizens. Mr Modi’s gurdwara visit sssumes significance as it comes while farmers, mostly from Punjab and Haryana, are protesting against the controversial laws.

After his surprise visit, Mr Modi tweeted he felt “blessed” and was “deeply inspired” by the kindness of Guru Tegh Bahadur. “This morning, I prayed at the historic Gurdwara Rakab Ganj Sahib, where the pious body of Sri Guru Teg Bahadur Ji was cremated. I felt extremely blessed. I, like millions around the world, am deeply inspired by the kindnesses of Sri Guru Teg Bahadur Ji,” he tweeted.