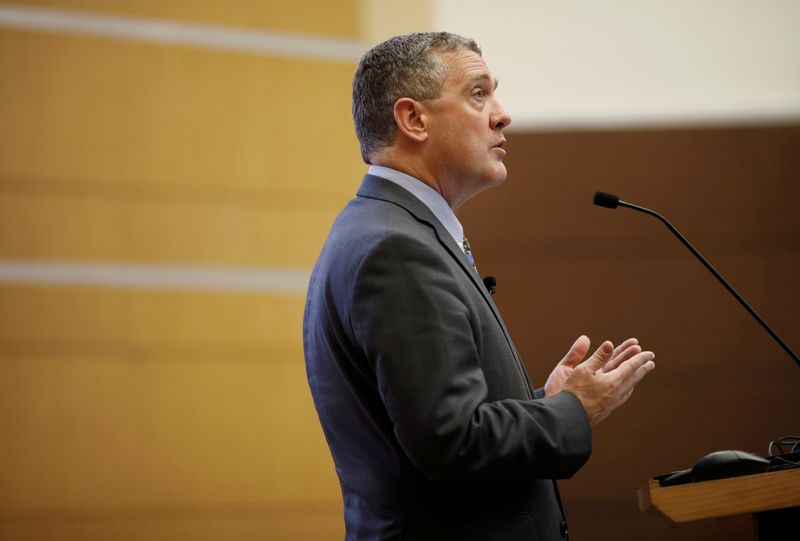 WASHINGTON (Reuters) – U.S. economic output will hit a new high by the end of June, a return to the pre-pandemic peak far ahead of the dire predictions of last year, St. Louis Federal Reserve president James Bullard said on Thursday.

“The ‘keep households whole’ fiscal strategy has been successful well beyond initial hopes,” Bullard told the Greater Memphis Chamber, with national income “as high as it ever was and…poised to grow at an above-trend rate.”

Real gross domestic product hit a high of $19.2 trillion at the end of 2019. For the first three months of 2021 it was $19 trillion on an annualized basis, putting the United States close to completing its recovery from the pandemic downturn, Bullard said, and “moving into the expansion phase of the business cycle.”

Jobs by contrast have lagged, with 8.2 million fewer people working than before the pandemic, and an index of hours worked at about 96% of where it was before the health crisis.

Bullard said he felt those figures were misleading, and that the labor market was “tighter” than it appears, citing the fact that as of March the ratio of unemployed people to job openings was 1.2 – low by historical standards.

Disclaimer: Fusion Media would like to remind you that the data contained in this website is not necessarily real-time nor accurate. All CFDs (stocks, indexes, futures) and Forex prices are not provided by exchanges but rather by market makers, and so prices may not be accurate and may differ from the actual market price, meaning prices are indicative and not appropriate for trading purposes. Therefore Fusion Media doesn`t bear any responsibility for any trading losses you might incur as a result of using this data.

Fusion Media or anyone involved with Fusion Media will not accept any liability for loss or damage as a result of reliance on the information including data, quotes, charts and buy/sell signals contained within this website. Please be fully informed regarding the risks and costs associated with trading the financial markets, it is one of the riskiest investment forms possible.