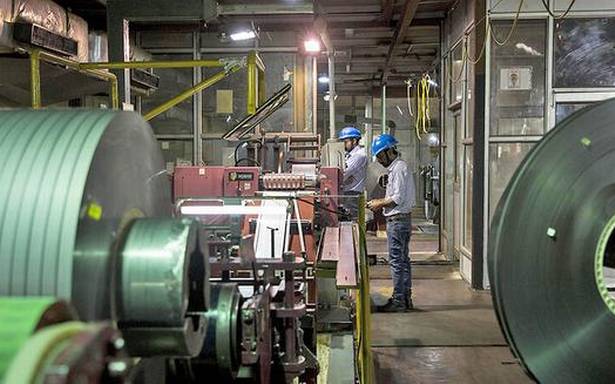 Ferro chrome (ferrochromium) prices in the country have firmed up by nearly 46 per cent over the last 2-3 months on the back of reduced raw material supply and an anticipation of a pick-up in demand from the stainless steel industry.

Prices are currently ruling at around ₹95,000 a tonne, as against ₹60,000-65,000 a tonne in September-October, 2020. Production of chrome ore, which goes into making ferro chrome, was impacted due to Covid-induced lockdown which consequently pushed up prices of ferro chrome, said industry experts.

Globally, the total chrome ore production was nearly 34.3 million tonne (mt) in 2019. South Africa accounts for nearly 60 per cent of the global total production at around 20 mt while India produces around 4 mt.

Production of chrome ore in South Africa during the first nine months of 2020 was down by 32 per cent while the same in India was down by nearly 50 per cent, Kaushik Das, Vice-President and Sector Head, Corporate Sector Ratings, ICRA, told BusinessLine.

“Production of stainless steel was down due to demand side issues following the lockdown induced slowdown. So the current price increase is more because of supply side push rather than demand side pull,” Das said.

South Africa accounts for 70 per cent of exports. While it previously used to convert most of its chrome ore into ferro chrome and export it, the increasing cost of electricity has impacted their ferro chrome production.

In India, there was a significant change in mining lease as on March 31, 2020, following which erstwhile lease expired with mines not operating for a few months. Ferro chrome producers, who do not have their own source of chrome ore supply, rely on merchant mines which were suffering from lower availability following the lockdown. This impacted production to some extent.

“The last six months have been challenging for the industry as domestic chrome ore production and availability was severely impacted. Subsequently, a slow ramp-up in ore production led to only partial feeding of the ferro chrome operations. This shortage of ore led to an increase in prices of around 42 per cent in Oct’20 auction,” said Jagmohan Sood, Director, Jindal Stainless Steel.

Volatility in prices to remain

According to industry insiders, South Africa is likely to impose export duty on chrome ore and this is expected to have a positive impact on ferro chrome prices.

With the stainless steel industry gradually ramping up production in anticipation of a pick-up in demand, the demand for ferro chrome is likely to increase. In such a scenario, lower ferro chrome ore output is likely to push up prices in the near term, said industry experts.

Following the fresh lease of mines, the players have to pay a high premium for extraction of ore for majority of the production in India. This is likely to push up cost of extraction and keep ferro chrome prices firm.

“Ferro chrome prices have been volatile over the years because there are very few integrated players. Most players purchase ore from outside and that sets a floor and prices usually do not go below that. That creates volatility in prices and that is here to stay. The high premium for extraction of ore for majority of the production in India and the recovery in demand is likely to keep prices firm moving forward,” said Das.