Home Celebrity 'Film Toofaan is like a dream come true for me' , Mrunal

'Film Toofaan is like a dream come true for me' , Mrunal 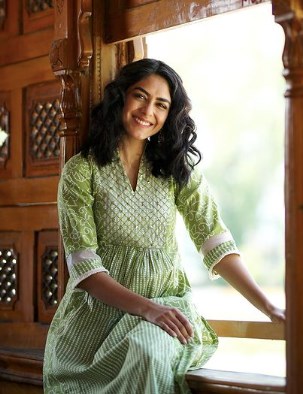 The trailer of one of the most anticipated films of the year ‘Toofaan’ was released yesterday and it is getting fantastic reviews from the audience. People are looking forward to watching the film. The film will be released on Amazon Prime on 16 July. The team had a fabulous release of the trailer and here Mrunal Thakur opened up about her role, work experience and much more.

When asked, how does it feel to be a part of such a big film, she said, “Film Toofaan is like a dream come true for me. I always wanted to work with Rakeysh sir. I remember messaging him on social media during Bhaag Milkha Bhaag. I feel blessed to be a part of the film.”

Talking about her character, she said, “I play the role of Ananya who is passionate and liberal. We always need that one person in life who always pushes you to achieve your aim. I play that person for Ali.  “

She further added, “I remember myself being under confident at some point in my life.  I was confused about what to do. I had my mother who always pushed me. She had a vision for me. When I was shooting the film, I always had her in my mind. My character is an amalgamation of my friends, my family, my director, my co stars and my team. I am super blessed to get this deadly combination at this stage of my career.”

Talking about what impact this film made on her, she said,” This film has made me a better person today. After the film,  I started training for MMA. People ask me is Toofaan 2 in the making ? I tell them, I wish. But I have realised it is very important to learn one sport in your life. It makes you better in every way.”

Film Toofan is directed by Rakeysh OmPrakash Mehra starring Farhan Akhtar as a National Level Boxer, alongside Mrunal Thakur and Paresh Rawal in supporting roles. The film is scheduled to release on Amazon Prime on 16 July.

Naseeruddin Shah Hospitalised Due To Pneumonia