Arrests were made and those that defied police orders and coronavirus safety protocol were slapped with massive fines as officers dispersed crowd in Finland.

Hundreds marched in protest against the government’s clampdowns to stem the novel COVID-19 cases in the capitals of Finland and Sweden on Saturday. As many as 300 anti-lockdown demonstrators congregated in Helsinki in breach of the capital’s public gathering ban, flouting mask adherence, and physical distancing, Finnish police tweeted. Arrests were made and those that defied the police orders and the coronavirus safety protocols were slapped with massive fines as officers dispersed the crowd to avoid an event of an outbreak. In Stockholm, similarly, demonstrators between 500 and 600 flooded the streets brandishing placards that read “freedom and truth”, as they violated the restrictions set by the Swedish government. Police in central Stockholm managed to disperse masses in order to slim down the assembly as threats of an outbreak loomed.

Even as Sweden, unlike the other European countries, has not enforced a strict lockdown but has just issued an advisory that shuttered restaurants last month, demonstrators in large numbers came out to protest the government’s move. Video footage on Swedish media depicted hundreds of people who had illegally gathered without masks in central Stockholm in the country’s first major protest against coronavirus restrictions. Crowd meandered at the Medborgarplatsen square not far from the capital’s Old Town noncompliant to police’s orders to return home. 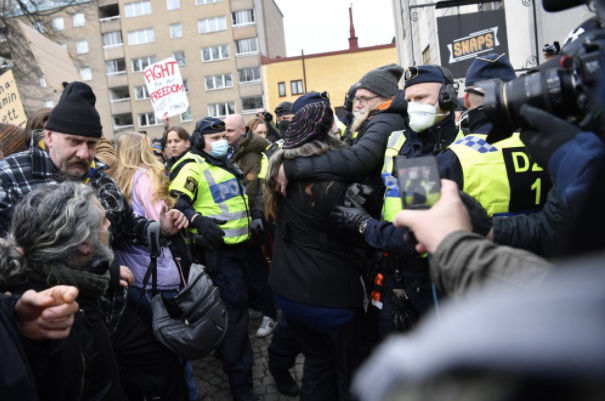 [Anti-lockdown protesters face police as they demonstrate against coronavirus restrictions in Stockholm. The protest was disbanded by police. Credit: Henrik Montgomery / TT via AP]

“There are so many people in Sweden who have had enough of these restrictions, which are really unfounded, and want to put their foot down and show that we don’t agree to it anymore,” Filip Sjostrom, an organizer from Freedom Sweden, told Expressen, as per AP.

Earlier, violent scuffles broke out between the security forces and flouters that had left six police officers critically wounded, according to the Swedish tabloids Aftonbladet and Expressen. The controversial rally was organized by a group named Freedom Sweden, associated press reported citing the on-ground sources. The rebel group believed that the cover restrictions were a form of restricting human rights and freedom. The rallies consisted of far-right activists, those that were against COVID-19 vaccines, and families with children. TV visuals portrayed the officers in riot gear shoving the protesters in the minibus. As the country recorded total of 13,000 fatalities, Stockholm police said on their website: “Police have taken the decision to break up the non-authorized gathering which is ongoing,” owing to the ban on public gatherings of more than eight people.

Back to Top
Close Add post
X
COVID-19: As Delhi extends lockdown, here are key takeaways from CM Kejriwals briefing…IndiaLast Updated: 16th May, 2021 17:51 IST In the wake of the COVID-19 situation in Delhi, CM Arvind Kejriwal announced the extension of lockdown until Ma…