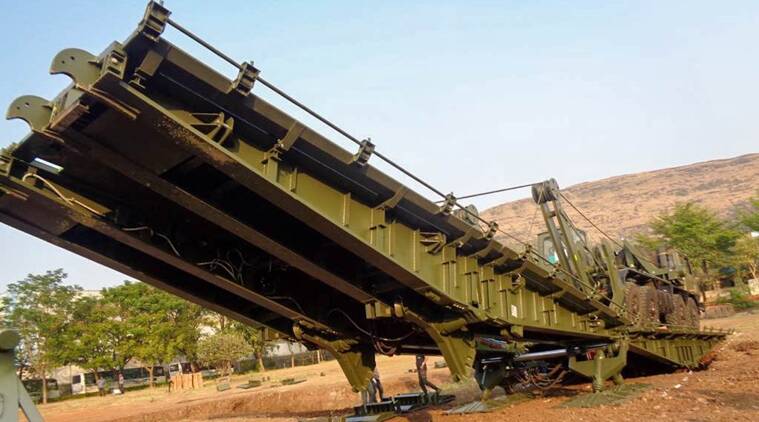 The first three sets of a 10-metre short-span bridge, designed and developed by the Defence Research and Development Organisation (DRDO), were handed over to the Army Tuesday at the facility of Larsen & Toubro Ltd at Talegaon in Pune, which is manufacturing these mechanically launched bridges.

These highly mobile bridges were developed by DRDO’s Pune based facility, the Research and Development Establishment (Engineers), which is part of the Pune-headquartered Armament and Combat Engineering technology cluster. This development has been done as per requirement of and in coordination with the Corps of Engineers of the Indian Army. Officials said the equipment will meet the important requirement of providing mobility to Indian forces by speedy bridging of gaps during operations. The DRDO has also developed five metre and 15 metre variants of the bridge, which have already been inducted into the Army.

A press statement from the Defence Ministry said, “This accomplishment is a step towards weaning away our Armed forces from foreign-manufactured equipment, with the bridge indigenously designed, developed and delivered as per schedule. All stakeholders have put in concerted efforts to overcome challenges and realise the ‘Make in India’ initiative of the government, which aims to ensure self-reliance and self-sufficiency in meeting the defence needs of the Indian Army.”

As per DRDO officials, the bridge which was handed over on Tuesday is a mechanically launched short-span bridging system, which belongs to Military Load Classification, 70 load class, and can bridge smaller gaps and canals up to 10 meters in length. Its salient features include high mobility launching platform suitable for heavy military traffic, a double-A shaped trestle that provides stability, quick construction requiring minimum crew and lighting arrangement for deployment at night.