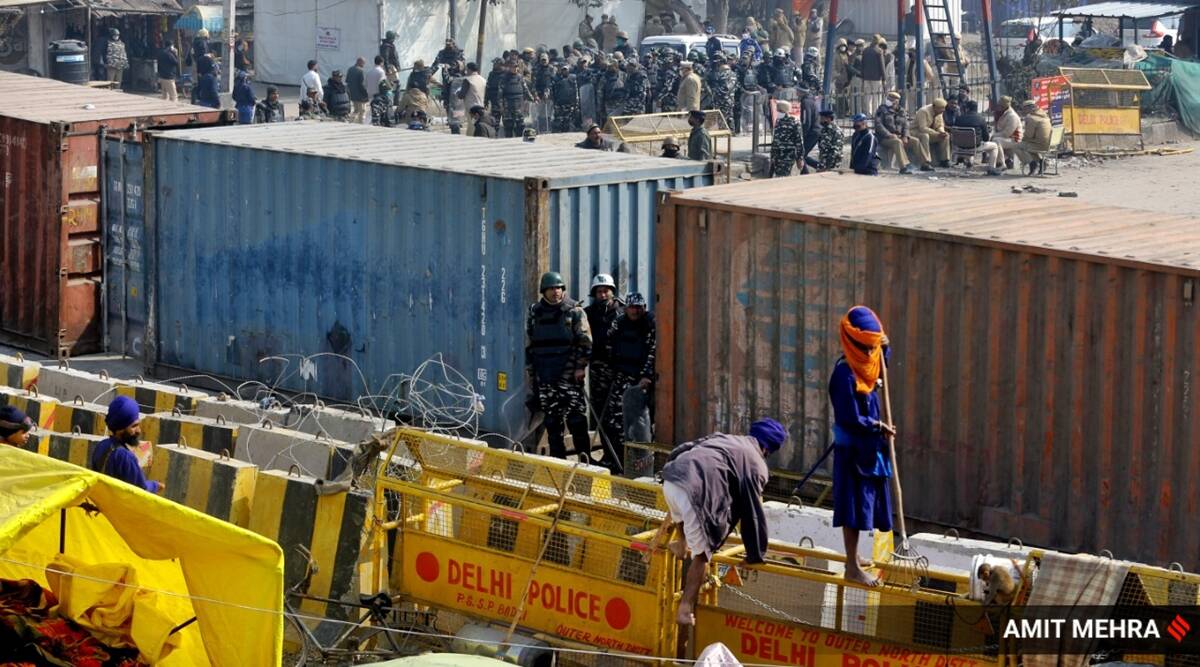 A group of around 150 men claiming to be local residents got past three layers of security barricades Friday to reach the protest site at the Singhu border to Delhi, staged a brief protest of their own claiming that the farmers’ agitation had affected their livelihood, and clashed with farm protesters as both sides pelted stones at each other — all in full view of police.

The local protesters gathered near GTB Memorial at the Delhi-Haryana border around noon and raised slogans, asking protesters to vacate the area and saying they would not tolerate any insult to the Tricolour in a reference to the violence on Republic Day. Police said they were from nearby villages of Singhu, Narela, Bawana, Alipur and Kundli.

Within an hour, the group had breached the police barricades and could be seen arguing with farmers, demanding that their protest be wound up and the road cleared. The argument soon spiralled into violence, with the group attacking tents and shelters at the site, and both sides indulging in stone-pelting. Police resorted to teargas shells and lathi charge to bring the situation under control.

A police officer was attacked with a sword by a farm protester. (ANI)

“The protesters entered peacefully without drawing much attention, from the side that is not barricaded. Once they reached the barricades, we tried to stop them. But they went around the barricades and got through. There were around 100 in number,” said a sub-inspector at the site.

Videos from the site showed the local group picking up stones from the road and hurling them towards the protest site as police personnel watched. As some from the protest site gathered at the barricades, police swung into action, standing between the two sides and occasionally using force to break the scuffle.

The local protesters gathered near GTB Memorial at the Delhi-Haryana border around noon and raised slogans.

In another video, the men who had gathered at the barricades can be seen attacking a farm protester with a stick. It shows a man coming forward and hurling a stone towards the protest site. As a protester confronts the group, police personnel are seen pulling him to the ground and beating him with lathis as some bystanders try to join in.

Delhi Police also tweeted a photo of a man raising a sword, with police personnel in the frame, with the caption: “SHO Alipur, Delhi intervenes between rioting protesters (MKSC faction) and local Singhu villagers, who had gone to register their protest against the happenings on Republic Day-2021 and continued loss of ordinary livelihoods for over two months.”

In a second tweet, police said: “This is how the SHO was assaulted; he has suffered grievous injuries on his hand. Peace has been restored. Legal action is being initiated.” 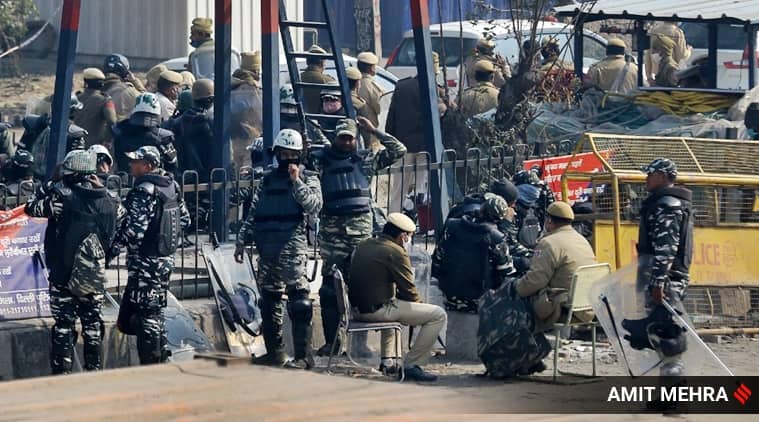 Parabjeet Singh, 23, said he came near the farm protest tent where langar is served when he was hit by a stone on the head. “I was trying to protect others while taking videos of the scene. I was hit by a big stone and started bleeding,” he said.

Chamkaul Singh, 42, who claimed to be an eyewitness, said: “Around 30-40 people came and started abusing us. They told us we have insulted the national flag. We told them that we too are citizens of India. They got violent and started pelting stones. Around 10 farmers have injuries.”

A smaller protest against farmers was also held at the same spot Thursday, but police had not allowed any interaction between the two groups. A group of farmers on a tractor-trolley arrives Singhu border on Friday.

Sarwan Singh Pandher, general secretary of the Kisan Mazdoor Sangharsh Committee (KMSC), claimed that “the BJP, in a premeditated manner, sent goons who were able to breach the police force”.

“They first broke apart the police tent, then broke our washing machines. They then tore apart another tent. They attacked us and many of us were injured. Police lobbed teargas shells at us. They did not stop the men,” he alleged.

Minutes before the clash, AAP minister Satyendar Jain and Delhi Jal Board vice-chairperson Raghav Chadha were present at the spot and alleged that police were not allowing them to bring water tankers to the protesting farmers.

The local protesters said they had held a meeting of residents from nearby villages and decided to stage a protest against the farmers. Among them was Amit Khatri (30) who works in transportation of industrial material. “We came to ask the farmers to leave because it is affecting our business. I used to pick up shipments from Singhu and transport them. I have to continue paying my driver Rs 15,000 a month but not made any profits ever since the protests started,” he said.

He said he was not affiliated to any party but supported the BJP and lives in Singhola village, which is less than 2 km from Singhu border. His cousin Amit Dagar (32) said: “We were initially supporting them, but they insulted the Tricolour… that is not acceptable.”

Back to Top
Close Add post
X
IIFT 2021: NTA releases Indian Institute of Foreign Trade entrance exam answer key at iift.nta.ac.in…IndiaIf candidates want to challenge the answer key in case of any discrepancies, they can do so on the official website till 30 January Representational i…

Flare-up at Singhu border: Group of over 100 clashes with farm protesters

X
Israel Embassy blast: High alert at airports, railway stations, bus stands in De…IndiaBlast in Delhi Latest News: A high alert has been issued at airports in Delhi and Mumbai following the blast near the Israeli Embassy in the National …
close