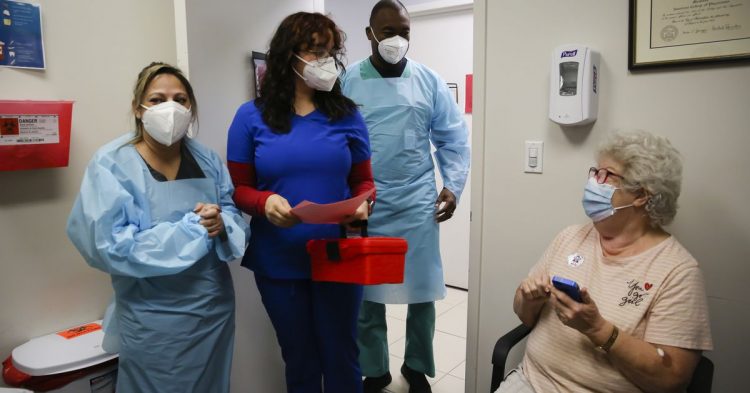 On Sunday, Lee County, Florida’s Department of Health sent out a fairly surprising press release. Hundreds of Covid-19 vaccines would be distributed on a first-come, first-served basis at various sites throughout the county. According to the press release, the first such distribution would begin at 2 pm on Monday, at a parks and recreation center in Estero, Florida. Vaccines would only be available to people 65 and older.

What happened next was completely predictable.

According to the News-Press, a local Florida newspaper, hundreds of elderly people lined up at the vaccination site. Some of them arrived just two hours after the vaccination sites were announced. Many of these elderly vaccine seekers wrapped themselves in sleeping bags and blankets to endure chilly weather — on Sunday, the temperature in Estero dipped as low as 46 degrees, according to the Weather Channel — and camped out hoping that they’d arrived soon enough to be vaccinated.

Before noon, more than two hours before vaccinations were supposed to begin, county health officials tweeted out that the Estero site was at capacity.

There’s a robust debate among public health experts about how to allocate Covid-19 vaccines while the lifesaving serum is still rare. Some experts argue that the most vulnerable populations, which include the elderly, should be prioritized. Others argue that public-facing workers should be vaccinated first because those workers are most likely to interact with others and to spread the virus if they become infected.

The Centers for Disease Control and Prevention (CDC), for what it’s worth, recommends combining these approaches. After vaccinating health care workers and residents of long-term care facilities, CDC guidelines call for people over the age of 75 and certain “frontline essential workers” to be given top priority.

Florida’s Republican Gov. Ron DeSantis, meanwhile, rejected the CDC’s guidance, announcing earlier this month that “our vaccines are going to be targeted for our elderly population,” meaning residents over the age of 65.

Yet, whatever the wisdom of prioritizing older people over frontline workers, it should go without saying that encouraging elderly residents to camp out for vaccines, like they were college students seeking tickets to a basketball game, is not an ideal public health practice. Among other things, elderly people who are the most at risk if they become infected probably aren’t best suited to sleeping under the stars and enduring chilly temperatures for 12 hours or more.

Between 300 and 600 people can be vaccinated over the course of a day at these pop-up vaccination sites. Meanwhile, Lee County has more than 770,000 residents, more than a quarter of them elderly.

Moreover, while Lee County’s vaccine distribution plan appears to be unusually haphazard, there are worrying early signs that the nation as a whole is struggling to distribute the vaccine quickly and efficiently. Earlier this year, federal officials set a goal of 20 million people vaccinated by the end of December. As of Monday, just over 2 million have been vaccinated. There might be some lag in reporting, but even so, public health experts are raising alarm bells about the country’s vaccine distribution plans.

That said, the United States currently ranks fourth among all nations in per capita vaccine doses administered, well ahead of nations like Canada and Germany that have stable democracies and competent leadership. The logistical challenges of distributing the vaccine are quite daunting, and they are likely to prove difficult, no matter who’s in the White House — or in various governor’s mansions.