Florida manatee found with ‘Trump’ carved into its back days after Capitol riots spurs outrage and investigation – World News , Firstpost Craig Cavanna, an investigating officer for the federal service, said whoever was responsible faced a fine of up to $50,000 and a year in federal prison for harming a protected species 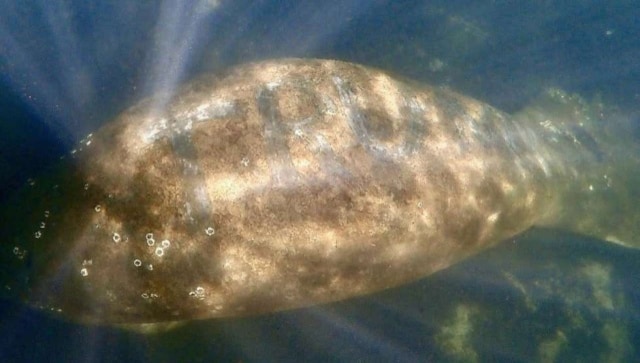 Manatee with ‘Trump’ etched onto its back spotted in the US. (Image: Twitter/@savethemanatee)

Miami: Wildlife authorities in Florida on Monday appealed for help in identifying who was responsible for scratching the name “Trump” on to the hide of a manatee.

The appeal by the Fish and Wildlife Service (FWS) came after the Citrus County Chronicle published a video that clearly showed the name of the US president etched on to the back of one of the large, slow-moving marine mammals.

Craig Cavanna, an investigating officer for the federal service, told the local newspaper that he was unable to comment “on a current, ongoing investigation.”

He said whoever was responsible faced a fine of up to $50,000 and a year in federal prison for harming a protected species.

The manatee was spotted on Sunday, four days after Donald Trump supporters stormed the seat of the US Congress in Washington, leaving five people dead. It was not clear when the animal was harmed.

Can this even be real? A manatee was discovered in Florida with the word “Trump” scraped on its back. pic.twitter.com/PH8YcmGRnz

It was swimming in the waters of the Homosassa River on the west coast of Florida, where the animals gather at this time of year in search of warmer waters.

The shallow waters of the canals make the manatees accessible to tourists who take boat excursions to swim among the large but harmless creatures. That also makes the creatures more vulnerable to attack by humans.

Florida is home to around 7,500 of the gentle herbivores, which are related to elephants and have whiskers on their muzzles and a spoon tail. They are also known as “sea cows.”

Despite their size — they can grow to four meters in length and weigh half a ton — they are easily hurt by the boats that speed around the state’s waterways and coastal waters.

According to the Florida Fish and Wildlife Conservation Commission, of the 637 manatees that died in 2020, 90 were victims of collisions with boats and 15 others were killed by other interactions with humans.