Home EntertainmentGossips For Alia Bhatt, boyfriend Ranbir Kapoor is all set to share his wardrobe & his kind gesture is winning hearts

For Alia Bhatt, boyfriend Ranbir Kapoor is all set to share his wardrobe & his kind gesture is winning hearts 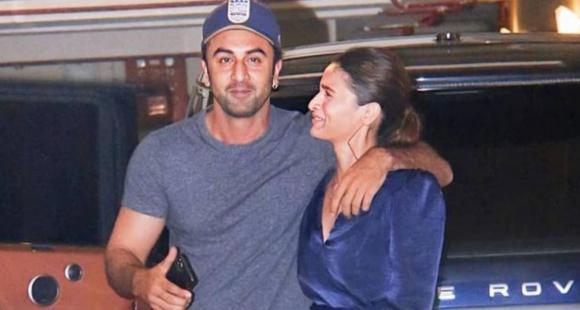 Ranbir Kapoor and Alia Bhatt are among the most loved couples in Bollywood. Recently, Alia shared the news about Ranbir’s kind gesture for charity and it has left fans excited.

For Alia Bhatt, boyfriend Ranbir Kapoor is all set to share his wardrobe & his kind gesture is winning hearts

Alia Bhatt and Ranbir Kapoor are among the popular stars in Bollywood who have wowed fans with their performances in their respective films. Not just this, the two, who have been dating each other for quite some time, are also known for helping out for a good cause. Speaking of this, recently, Alia announced that boyfriend Ranbir is all set to give away a few items from his wardrobe for her organisation named “Coexist’ that works towards issues of animal and ecological welfare. She proudly announced that money collected from the sale of Ranbir’s closet items would help to provide holistic nutrition for children fighting cancer.

Taking to her Instagram story, Alia shared a photo of Ranbir and wrote, “Tadaa! Ranbir is sharing his wardrobe with you. Proceeds will go to providing holistic nutrition for children fighting cancer.” She announced that the sale would go live on Tuesday and since then, fans have been gushing over the star’s sweet gesture for Alia’s charity organisation. The news went viral on social media and several fan clubs of the two could not stop gushing over Ranbir’s gesture for his ladylove.

Meanwhile, recently Ranbir spoke up in a chat with Rajeev Masand that if the pandemic wouldn’t have come in the way, he would have ‘sealed’ the marriage deal with Alia. He shared that he does not want to jinx things and hopes to tick mark the marriage goal very soon in life. That is not all, even Alia has recently declared her love in an indirect way during an ‘Ask Me session’ on Instagram. A fan had asked her if she loves ‘8’ and the actress blushed in a video reply and made a heart with her hand while replying with a yes.

On the work front, Alia and Ranbir will be seen together in Brahmastra. The film is helmed by Ayan Mukerji and produced by Karan Johar.

Also Read|Alia Bhatt blushes while professing love for Ranbir Kapoor as she plays true or false with fans; WATCH