For many farmers, it’s a Hobson’s choice 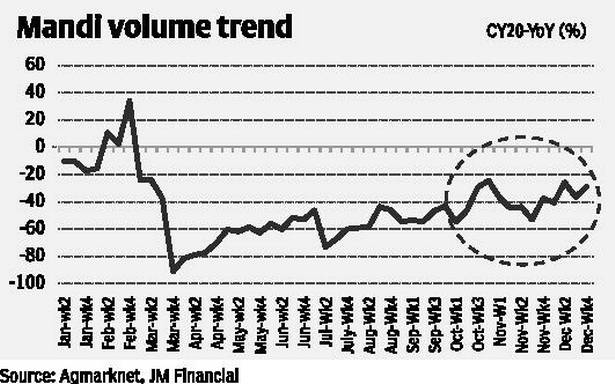 It has been a difficult choice for the farmers to choose between an open market and the APMC (Agricultural Produce Market Committee) mandis to sell their crops. While the former exposes them to the insecurities of market, the latter is blamed for exploitation on prices.

To understand the outcome of the new Farm Act to free farmers from the compulsions of the APMC laws and mandi structure, BusinessLine spoke with farmers across a few States.

Lakshman Singh, a mustard grower from Indragarh taluka of Bundi district in Rajasthan, said that the choice has been a difficult one as there is no price assurance at either place.

“We are just concerned about getting higher price and getting the money on time. In open market, there is a risk of default from the buyers and farmers may have to fight for his money alone, whereas in APMC there is a protection by mandi structure and a large community. But APMCs can’t be an ideal place for higher prices as there are commissions and other costs involved,” said Singh, who prefers selling in the open market given a higher price for the crop.

“After every ₹100 I earn in the market I have to pay a commission of ₹10 to a dalal,” he said. Sammad remains unsure if selling his produce out of the APMC will assure him a better price. “What if the trader purchases good quality produce and then refuses to take second grade produce? Who will buy it?” he asked.

However, many onion cultivators in Lasalgaon, Asia’s biggest market for the bulb crop, has a different view. One of the farmer leaders and cultivator himself said that APMCs are “slaughterhouses” where farmers are looted. “We are planning to sell our own produce in the wholesale market. But there is a huge lobby of middleman, traders and local politicians who want APMCs to continue,” he said, requesting anonymity. “We have to survive and sell our produce and hence cannot go against the lobby,” he added.

In almost all APMCs, arhatiyas play the role of a money lender and farmers are forced to take loans against standing crops and are compelled to sell the produce through them. But farmers remain in the dark at what price their produce is actually traded.

Retailers and traders put their hands under a handkerchief and press fingers to negotiate the price for farmers’ produce and a deal is completed. This handkerchief deal known as hathaa still continues across APMC markets.

Women farmers have a different issue. Madhuri Khadse says that majority of women sell their produce to village middlemen as “male-dominated” mandis are “not women-friendly”.

For traders and APMC operators in Gujarat, the volumes through conventional mandi trade has not seen much impact. But due to a shrunk jurisdiction for the APMCs, the revenues have taken a hit. “Nearly 40 per cent revenue used to come from trade happening outside the mandi. While that trade continues to take place unaffected, the revenues have gone down as we were not allowed to tax trade outside the APMC premises,” said an office bearer at Amreli APMC.

Where farmers control the flow