Home News For Putin, the most personal of challenges from a determined political foe

For Putin, the most personal of challenges from a determined political foe 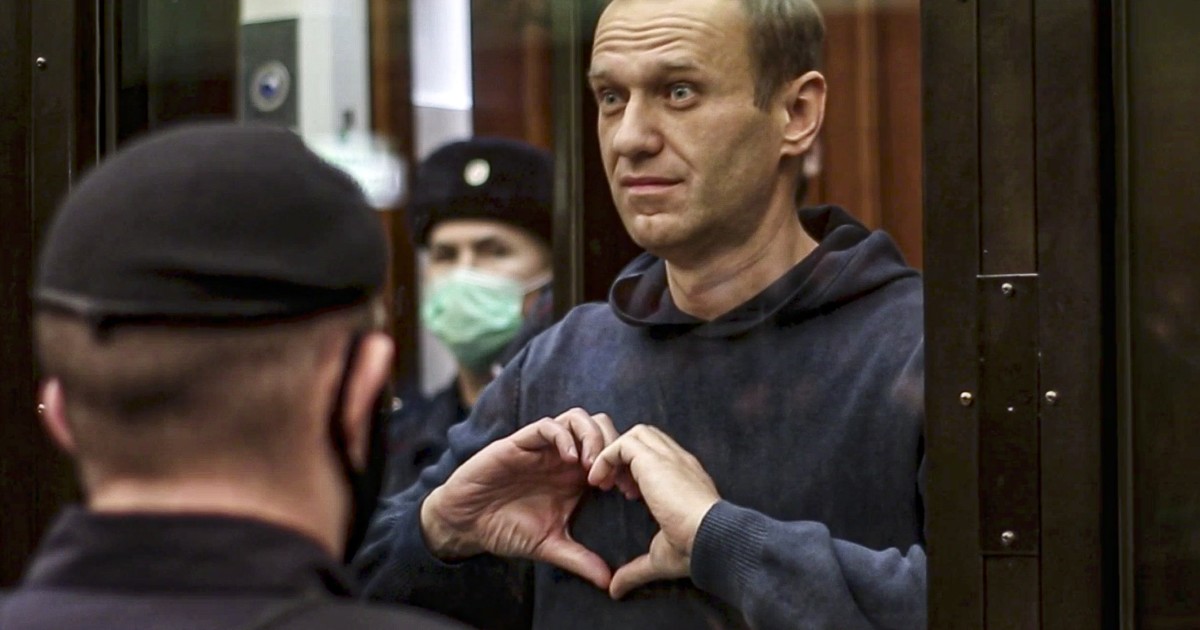 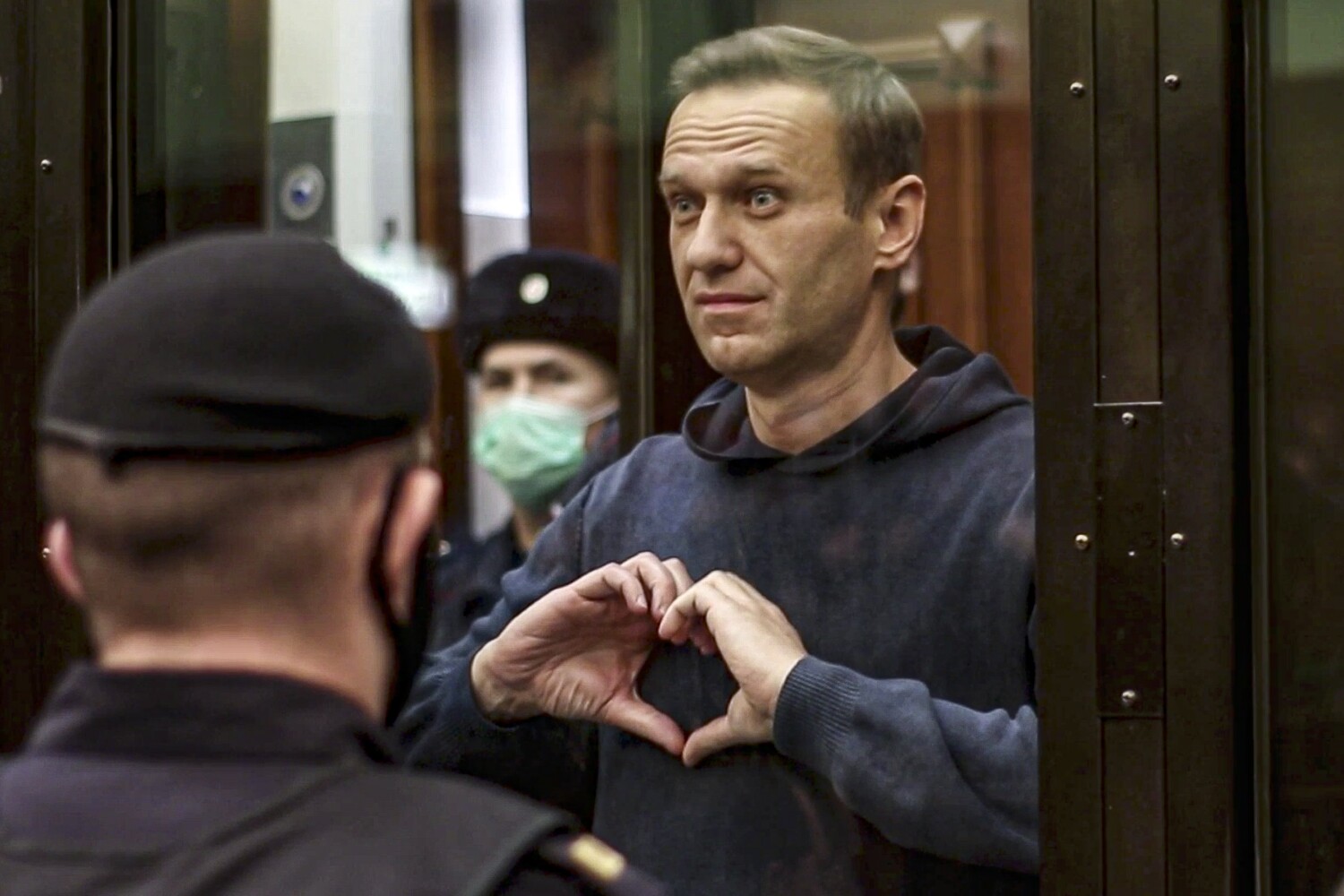 Just how worried is Vladimir Putin?

In some respects, the Russian president’s two-decade grip on power seems secure enough. His nemesis, anti-corruption crusader Alexei Navalny, is bound for a Russian penal colony. Putin’s security forces have swept up record numbers of protesters and threaten more mass detentions if unrest persists. Foreign criticism pours in, while the Kremlin contemptuously brushes it aside.

But Navalny — sentenced this week to two years and eight months of imprisonment on what his backers call baseless, politically motivated fraud charges — has done what almost no one in Putin’s Russia has dared to do: heaped highly public ridicule on a leader who strives to avoid appearing weak.

In open court Tuesday, the 44-year-old activist — who survived an August attempt on his life and voluntarily returned to Russia after medical treatment abroad despite facing certain arrest — delivered a scathing courtroom speech in which he derided Putin, a onetime KGB agent, as a “little man in a bunker.”

Riffing sarcastically on the honorifics bestowed on a roll call of Russian rulers, Navalny said Putin would go down in history as “Vladimir the underpants poisoner” — an allusion to the botched assassination bid that allegedly involved a military-grade nerve agent applied to a pair of underwear. It was a startlingly personal denunciation of a leader who touts his machismo with photos of himself bare-chested on horseback, sparring in judo bouts and outskating hockey pros.

On Thursday, an post on Navalny’s Instagram account again hit hard on the themes of corruption and impunity at the highest levels of government. It called his imprisonment a stark message from Putin to all Russians: that “we spit on laws and steamroll anyone who dares to challenge us.”

Although charismatic and social media-savvy, Navalny is far from universally known or loved among Russians, even those who have turned out for protests over nearly three weeks this year demanding his freedom. But he has successfully channeled widespread fury over an eroding standard of living, massive graft and corruption, uneven handling of the COVID-19 pandemic — and, in some cases, simple weariness with Putin, who is the only ruler many young Russians have ever known.

“It is rattling him,” Ian Kelly, a former U.S. ambassador to the former Soviet republic of Georgia, said of the 68-year-old Russian leader, who first took control of the country in 1999. “There’s a real sense, especially among young people, that Putin has been around too long.”

A new poll appeared to bear out Putin’s slipping stature among the young. The independent Levada Center on Thursday released a survey indicating that 46% of Russians between the ages of 18 and 24 did not approve of the president. Last year, only 31% expressed disapproval.

That cooling sentiment toward Putin might not always translate into backing for Navalny, but it does give momentum to calls for change.

Anastasiya Osipova, a 25-year-old Moscow office manager, described herself as “neutral” on Navalny, but said he symbolized the “possibility of an alternative point of view” long missing from the Russian political scene.

“The situation we have here is a lack of choice,” she said.

Somewhat worryingly for Putin, the protests not only spanned a vast geographical spread, erupting all across the country’s 11 time zones, but they also drew in first-timers who had sat out previous demonstrations. The monitoring group OVD-Info said protests on the back-to-back weekends of Jan. 23 and Jan. 30, and after Navalny’s Tuesday sentencing, brought more than 10,000 detentions — more than the group has recorded since it began tracking such arrests in 2011.

While Putin continues to draw strong support from Russians who prize stability above all, there is also a substantial cohort whose members say that even if they choose to not take part in the protest movement, they do want things to be different.

“I’m too old to get locked into a police van,” said Moscow businessman Viktor Nasanov, 42, who was not among those who took to the streets. He said that he did not want to see Navalny come to power — a prospect that the activist and his team do not raise — but that he wanted to see a meaningful political opposition emerge.

“What we have here is a road to nowhere,” Nasanov said. “The country is deteriorating, and there’s no other way to change the system except for shattering it in a way Navalny does.”

With the full might of the state behind Putin, protests alone have little chance of toppling him, analysts say. But the Russian leader relies on an inner circle that both props him up and profits immensely from his rule — and longtime Russia watchers say that for this reason, Putin has more reason to fear a tap on the shoulder from powerful insiders who see his role as becoming problematic than from a popular protest movement that can be crushed with relative ease.

Moreover, the idea of a strongman leader has powerful cultural appeal among many Russians, and trying to appease or co-opt the movement Navalny has conjured up could hold genuine peril for Putin.

“I think his No. 1 concern is he doesn’t want to be perceived as being weak,” said Kelly, who is ambassador in residence at Northwestern University. “For him to extend an olive branch or in some way try to accommodate this movement would be seen as weakness.”

At the same time, the prospect of a harsher crackdown on street unrest, to the point of using lethal force, could also backfire, according to veteran observers.

“The regime has been very careful not to overstep into total Tiananmen Square-type repression,” said Alina Polyakova, president of the Center for European Policy Analysis, referring to the 1989 Chinese crackdown on pro-democracy protesters. “I think they’re going to have to face that choice very, very soon.”

Polyakova, interviewed this week on the Brookings Institution’s Lawfare podcast, said a deadly quelling of protests could mark either a “turning point” toward Russia becoming “a full-on dictatorship,” or a boon to Navalny’s movement, mobilizing millions.

But Navalny and his team, perhaps fearing a prolonged standoff like the one in neighboring Belarus, on Thursday signaled a move away from street protests in favor of concentrating on tactical voting in the September elections. A senior aide, Leonid Volkov, said on Navalny’s YouTube channel that “Alexei has asked us to concentrate on this autumn.”

For now, the government is largely contenting itself with florid accusations against Navalny and his aides, reminiscent of Soviet-era demonizing in state media of designated enemies of the state. Shortly after Navalny’s return to the country last month from Germany, a weekly program on the Russia-1 TV channel called his team “political pedophiles” — a seeming reference to Navalny’s popularity among the young.

Other outlets seek to paint him as irrelevant or a puppet of the West, or both. The well-known editor in chief of the television network RT, Margarita Simonyan, declared that Navalny’s popularity had peaked long ago, and called him a traitor working for foreign spy agencies.

Developments later in the year, including September’s parliamentary elections, will provide a better sense of the extent to which Navalny has managed to shake up the system, analysts said. In the meantime, larger questions posed by his plight will continue to percolate, even with him behind bars, some predicted.

“It’s about this sense of, what are Russian citizens willing to put up with, how are they trying to protest an authoritarian-kleptocratic regime?” said Michael Smeltzer, a research analyst at the democracy think tank Freedom House. “It’s not just Navalny — it’s a movement.”