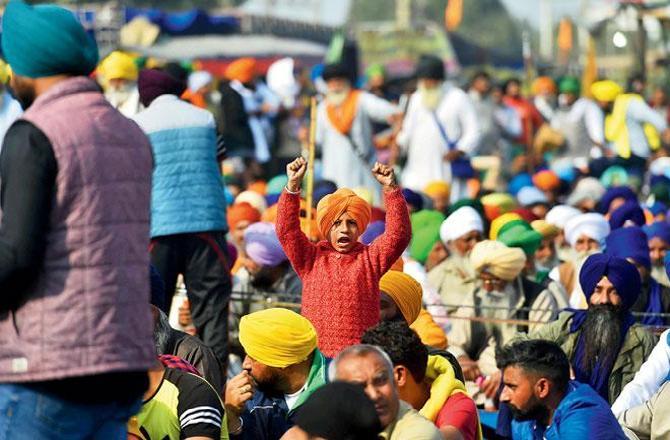 The Supreme Court on Wednesday observed that if urgent measures are not taken now, then the ongoing farmers’ protest may spiral out of the government’s hand to become a national issue. Against this backdrop, it ordered eight farmer unions be made party to the PIL seeking removal of farmers from various Delhi borders, and a joint hearing of the Centre and the farmers’ unions on Thursday in a bid to end the impasse.

A bench, headed by Chief Justice S.A. Bobde and comprising Justices A.S. Bopanna and V. Ramasubramanian, proposed forming a committee, including the representatives of both the Centre, farmer unions and other relevant stakeholders, to arrive at some acceptable solution.

The Chief Justice told Solicitor General Tushar Mehta, representing the Centre, that the government’s negotiations may not work.

“You should be willing to negotiate and we should have a farmers’ union before us,” said the Chief Justice, seeking names of the farmer unions.

Emphasising on forming a committee comprising farmers unions from the country, the Chief Justice said: “This will soon become a national issue.it seems government may not able to work it out.”

During the hearing, the bench observed the situation warrants an urgent resolution measures through negotiations, as the agitating farmers at the Delhi borders not appearing to be in a mood to talk.

The Chief Justice told Mehta that the government negotiations may fail, therefore, it is necessary to have some farmer unions appear before the court to explain the matter.

Mehta informed the top court that the government will not do anything against the interest of the farmers and it is willing to address the ongoing impasse by having discussion on clauses in the laws. He, however, insisted there should an open-minded discussion, and the farmers union should not insist on repealing the farm laws.

The top court issued notice to the Centre on the PILs seeking removal of farmers, who have blocked various Delhi borders. The petitioner, during the hearing, cited the top court order in the Shaheen Bagh matter, where it had said that the “protesters cannot block public roads”.