Former presidents Obama, Bush, Clinton unite on ‘Celebrating America’ inauguration special: ‘We’re at our best when we’re all moving in the same direction’ 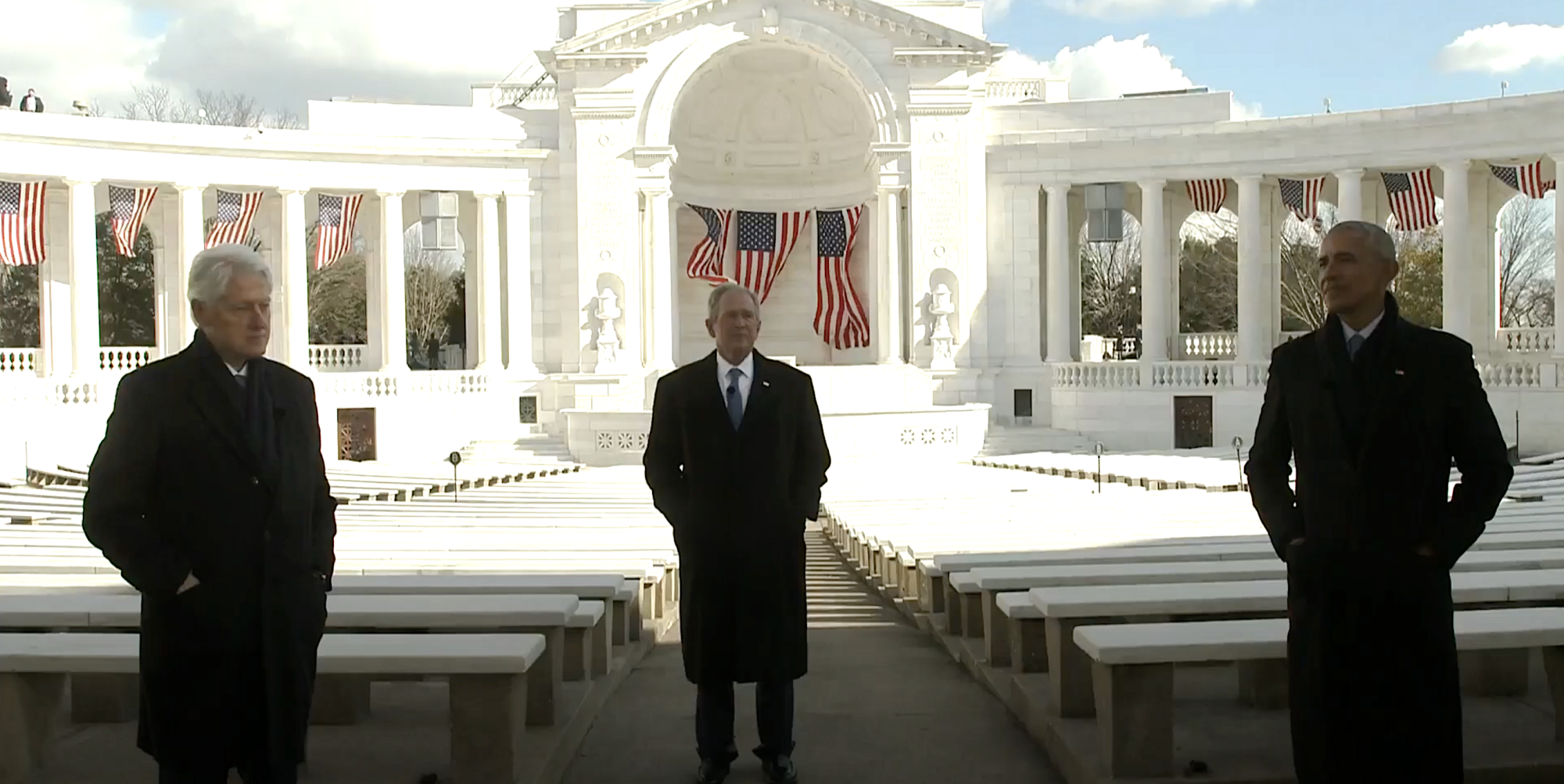 An inauguration day that kicked off with unifying, feel-good performances by Lady Gaga, Jennifer Lopez, and Garth Brooks ended on a similar high note with Wednesday evening’s 90-minute Celebrating America TV special — the finale of which featured a regal Katy Perry triumphantly performing “Firework” on the steps of the Lincoln Memorial, as a dazzling pyrotechnics display filled the sky behind the Washington Memorial and President Joe Biden, first lady Dr. Jill Biden, Vice President Kamala Harris, and second gentleman Doug Emhoff looked on.

Other Celebrating America performers included Jon Bon Jovi, Black Pumas, and the Foo Fighters, but the real rock stars of the night were former presidents Barack Obama, George W. Bush, and Bill Clinton, who appeared together in a recorded message for Biden and for the entire nation, keeping in the spirit of togetherness that marked the historic day.

“I think the fact that the three of us are standing here, talking about a peaceful transfer of power, speaks to the institutional integrity of our country,” said Bush, later stating, “I think if Americans love their neighbor like they would like to be loved themselves, a lot of division in our society would end.”

Clinton acknowledged the tumultuous times in which Biden’s inauguration took place, but maintained a sense of optimism. “So, this is an unusual thing,” he said. “We are both trying to come back to normalcy, deal with totally abnormal challenges, and do what we do best, which is try to make a more perfect union. It’s an exciting time. … It’s a new beginning, and everybody needs to get off their high horse and reach out to their friends and neighbors and try to make it possible.”

“We’ve got to not just listen to folks we agree with, but listen to folks we don’t,” agreed Obama. “And one of my fondest memories of the inauguration was the grace and generosity that President Bush showed me, and Laura Bush showed Michelle. And it was a reminder that we can have fierce disagreements and yet recognize each other’s common humanity and that as Americans we have more in common than what separates us. … If in fact, as George said, we’re looking for what binds us together, the American people are strong, they’re tough, they can get through hardship. And there’s no problem they can’t solve when we’re working together. I think that was the theme of Joe’s inaugural speech, and I think all of us discovered we’re at our best when we’re all moving in the same direction.”

The presidential trio then wished their successor well. “All three of us were lucky to be president of this country. Mr. President, I’m pulling for your success. Your success is our country’s success, and God bless you,” said Bush. “I’m glad you’re there and I wish you well. You have spoken for us today, and now you will lead for us. And we’re ready to march with you,” said Clinton. And Obama, for whom Biden served as Vice President for eight years, wrapped it up warmly with: “Joe, I’m proud of you, and you and Kamala need to know you’ve got all of us here rooting for your success, keeping you in our prayers, and we will be available in any ways that we can as citizens to help you guide our country forward.”

The Celebrating America special then switched back to host Tom Hanks, who was visibly moved, proclaiming, “Wow. When our former presidents unite like that, much of the rest of the world must marvel at what America is, at what Americans can do.”

The celebratory tone for the special was set by the opening number, which also took place on the steps of the Lincoln Memorial, by American rock ‘n’ roll hero Bruce Springsteen, who said, “I want to offer this small prayer for our country,” as he introduced his acoustic performance of “Land of Hope and Dreams.” Justin Timberlake then appeared remotely, in his hometown of Memphis, performing his fittingly titled “Better Days” duet with R&B singer-songwriter Ant Clemons at the hallowed Stax Museum of American Soul Music, joined by students and alumni of Stax Music Academy.

Other artists did cover songs that captured the mood of the day: John Legend, who performed at the Democratic National Convention last year, sang “Feeling Good” in front of the Lincoln Memorial, while Demi Lovato, whose ferocious 2020 protest song “Commander in Chief” made it abundantly clear how she felt about then-president Donald Trump, went with the decidedly more joyful Bill Withers classic “Lovely Day” for this event, doing a studio performance with frontline healthcare workers as her virtual backup singers. While the Celebrating America special understandably caught some flak on social media for frontloading the show with mostly male artists, the final two spectacular performers, Perry and Lovato, felt like the night’s headliners.

“In the last few weeks — in the last few years — we’ve witnessed deep divisions and rancor in our land. But tonight, we ponder the United States of America, the practice of our democracy, the foundations of our republic, the integrity of our constitution, the hope and dreams we all share for a more perfect union,” declared Hanks. “To some, a presidential inauguration is a tradition, marks the commitment, a new four-year term. Yet in truth, inauguration day is about much more than the swearing in of our next national leaders. This day is about witnessing the permanence of our American ideal. Every four years, we hear the words that will empower us all on the journey ahead, the message that can unite us as we begin a new passage from where we are to where we can be, a trek to a common goal, to the promise of our promised land. … If the words ring out, it is not only due to the power of the oratory, it is because the dream of America has no limits and resonates well beyond any single day.”