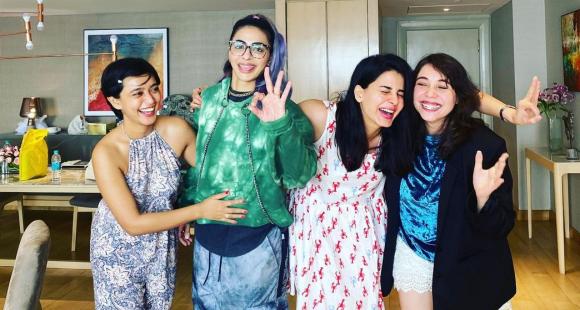 Kirti Kulhari took to Instagram to share a bunch of photos with her girl gang and announced Four More Shots Please Season 3. Check it out.

After a successful two seasons, Amazon Prime Video”s much loved show Four More Shots Please is back with its third season. The leading ladies of the show were without a doubt ecstatic as they shared the news on social media with their fans and followers. Kirti Kulhari took to Instagram to share a bunch of photos with her girl gang and announced the brand new season. She also revealed that shooting for Four More Shots Please Season 3 will begin soon.

Kirit captioned their super fun photos, “And we are back #fourmoreshotsplease #season3 Shoot begins super soon ..Lovely to be back with the crazy 3 [email protected] @sayanigupta #banij @pritishnandycommunications @joyeetacruises.” Turns out, the team has already begun workshops with their director Joyeeta.

Check out the photos of the cast of Four More Shots Please ahead of Season 3 shoot:

The show is created by Rangita Pritish Nandy and produced by Pritish Nandy Communications. The web series was also nominated in the best comedy series category at the 48th International Emmy Awards 2020.

ALSO READ: Tandav Review: Saif Ali Khan’s half baked political drama is as basic as it gets