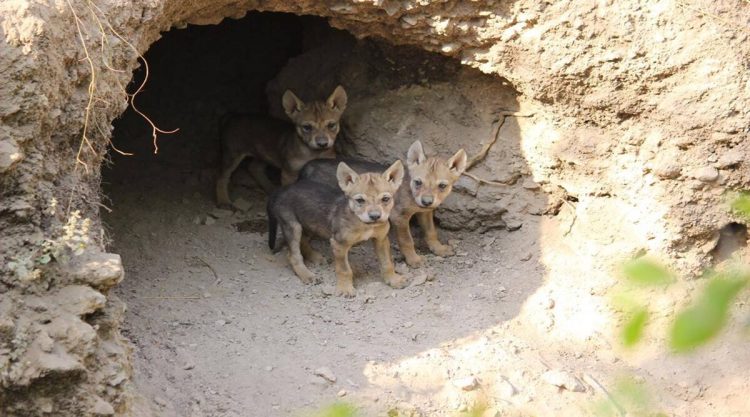 Wolf Ruhi has delivered four pups in a natural den she and her male partner Rahil have dug inside their enclosure in Rajkot Zoological Park (RZP), popularly called Pradyuman Park, said park authorities on Wednesday. This is the second consecutive year that the wolf couple have bred successfully.

“Indian female wolf Ruhi had delivered four healthy pups after successfully mating with male wolf Rahil. The four pups were spotted outside their den on the night of December 29. It appears that the pups could have been delivered inside the den around 10 to 12 days ago,” Rakesh Hirapara, Superintendent of the RZP said in an official release.

This is second consecutive year that the pair has bred successfully in the RZP. Ruhi had a litter of four pups last year also and all of them survived. With the addition of the four pups this year, the number of Indian wolves in the zoo have gone up to 10.

The superintendent said that the wolf couple had started digging a den inside their enclosure a few weeks ago before Ruhi’s first litter last year though their enclosure does have a night shelter where they can hide without any disturbance.

“This indicated that the animals had adapted the place and had started behaving normally. Ruhi delivered four pups inside the den last year and she followed that litter with one more a few weeks ago this year. The female had started confining herself to the den a few days ago. Therefore, we had placed a CCTV camera focused on the den a few days ago. Through the camera, we could know that she had had her second litter,” Hirapara told The Indian Express.

To prevent the den entrance from caving in, the part manager later strengthened walls and installed a sliding door there.

Ruhi and Rahil were brought to RZP in March 2017 from Sri Chamarajendra Zoological Garden, Mysore under an animal exchange programme. The zoo superintendent said that the two animals of the canine family were in their prime when they were brought here.

“We don’t have space to accommodate 10 wolves. Therefore, we will have to think of some animal exchange programme. For example, we have only a female royal Bengal tiger. We are searching for a partner for her,” Hirapara said.

Incidentally, white tigers have successfully been breeding in the RZP so are Gir lions. The bear couple too has mate but their breeding attempts have not remained successful so far, added the superintendent.

The RZP, run by Rajkot Municipal Corporation (RMC), is home to 437 animals and birds and reptiles.