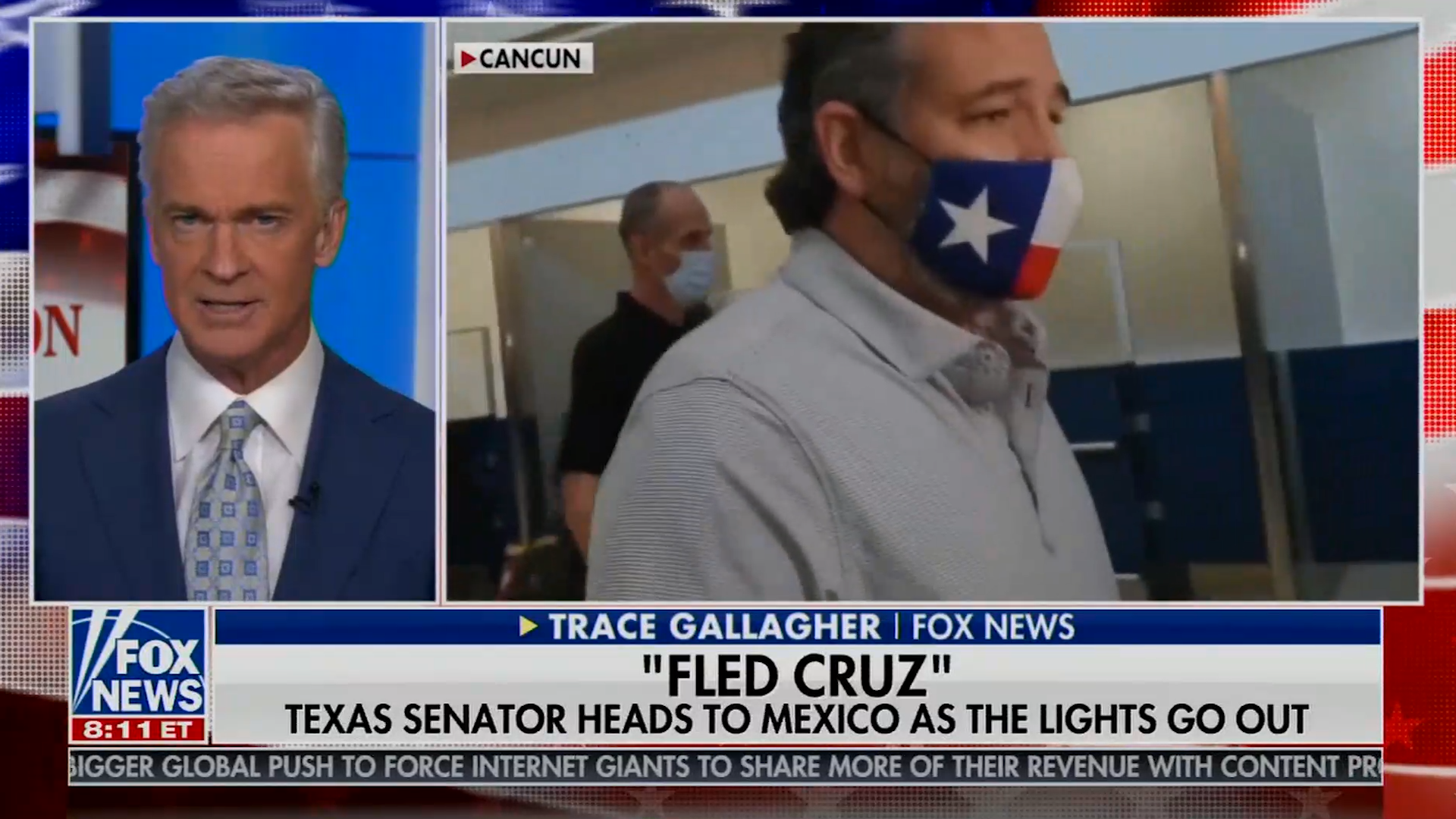 On Tucker Carlson Tonight Thursday, guest-hosted by frequent guest Mark Steyn, Fox News correspondent Trace Gallagher ripped Texas Senator Ted Cruz for taking a trip to Cancun, Mexico, on Wednesday amid the ongoing crisis in his state due to historically cold temperatures. Though the majority of Texans now have their power back on, most of the state had been without power, heat or water for days when Cruz left on Wednesday.

“Governor Abbott is also asking President Biden for an emergency declaration,” Gallagher said, “and Texas Senator Ted Cruz asked the president to fast-track that declaration right before he fast-tracked his way to Cancun where it’s 80 degrees.”

Cruz returned on Thursday following fierce backlash, admitting the trip was a mistake, and saying he only went because his daughters wanted to go somewhere during a break from school, and that he was just accompanying his family before turning right back around. But a text thread released to multiple outlets makes it appear as though Cruz’s wife Heidi was rallying neighbors to head south to escape the cold. Gallagher called Cruz out for leaving his constituents in their time of need.

“Traditionally, in times of crisis, national officeholders act as conduits to the federal government, relaying the immediate needs of constituents,” Gallagher said. “Though Cruz claims he was alway at the helm. Quoting again, ‘My team and I will continue using all our resources to keep Texans informed and safe.’ Apparently doing that from the Cancun office.”

“Republicans are a bit baffled by the trip, Democrats are furious, calling for Cruz to resign,” Gallagher said. “Remember, it was Cruz who hammered the mayor of Austin for telling his residents to stay home for the holidays then hopping on a flight to Cabo.”

Though Cruz originally made it seem as though the plan was to escort his family to Cancun then immediately return home, he later admitted that he had planned on spending multiple nights there. Despite that, upon his return, he expressed a desire to help get power and water back for all Texans. But it appears the gesture may have come too late.

“Now he says he wants to help get the power and the water back on, right after he finishes a margarita,” Gallagher said laughing. “I’m kidding. Wants to get the water and power back on.”

Back to Top
Close Add post
X
Courteney Cox performs ‘Friends’ theme song on the piano…EntertainmentPhoebe would have been proud. Courtney Cox, who played cleanliness freak Monica Gellar in 'Friends', recently showcased her piano prowess on social me…

Fox News slams 'Fled Cruz' for Cancun trip: Wants to get power back on 'after he finishes a margarita'