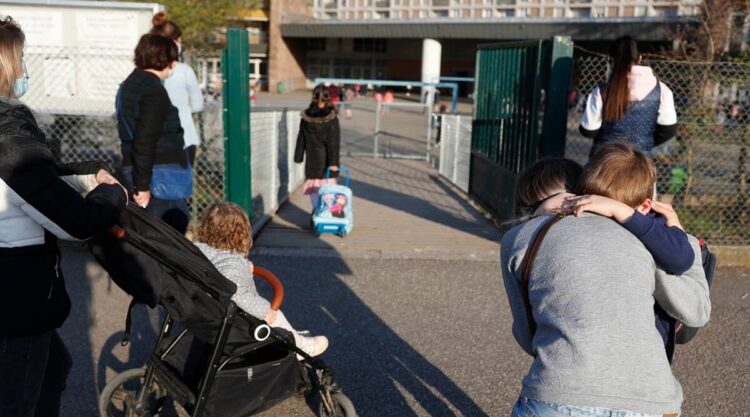 French President Emmanuel Macron on Wednesday announced a three week nation-wide school closure and a month-long domestic travel ban as the rapid spread of the virus ramped up pressure on hospitals.

In a televised address to the nation, Macron said new efforts are needed as the epidemic is accelerating. It’s a departure from the government’s policy in recent months which has focused on regionalized restrictions. School closures in particular had been seen as a very last resort.

“We’re going to close nursery elementary and high schools for three weeks”, Macron said, adding that a nation-wide 7 pm – 6 am curfew will be kept in place.

Macron said restrictions already applying in the Paris region and elsewhere will be extended next week to the whole country for at least one month. Under these restrictions, people are allowed to go outside for leisure but within a 10 kilometer (6 miles) radius from their homes and without socializing.

Also most non-essential shops are closed down. An overnight nationwide curfew has been in place since January and all France’s restaurants, bars, gyms, cinemas and museums have been closed since October.

Macron said the school closures aimed at avoiding major disruption by bringing forward the date of scheduled Easter holidays. “All children will get online teaching next week”, Macron said. “Then they will go on vacation for two weeks.”

According to figures reported by the UN education agency UNESCO, to this date, France has closed schools for 10 weeks in total since the start of the pandemic.

In addition, Macron promised to speed up the vaccination campaign by giving access to all people aged 60 and over in mid-April, those aged 50 and over in mid-May and the rest of the population a month later. So far, France has prioritized people living in nursing homes and those aged 70 and over as well as health care workers and people with serious health conditions.

The total number of COVID-19 patients in intensive care in France surged past 5000 on Tuesday, the first time in 11 months that the figure has been that high. Macron on Wednesday said numbers of hospital ICU beds will be increased in the coming days from the current 7000 to 10000. He said 44 of patients now in intensive care are aged under 65.

Though France is now Europe’s latest virus danger zone, President Emmanuel Macron has resisted calls for dramatic action. He decided Wednesday to stick broadly to his strategy – a third way between freedom and lockdown meant to keep both infections and a restless populace under control until mass vaccinations take over.

After Britain’s death toll shot higher in January after new variants slammed European countries from the Czech Republic to Portugal, France continued vaunting its third way. French scientists projections – including from the government’s own virus advisory body – predicted trouble ahead. Charts from national research institute Inserm in January and again in February forecast climbing virus hospitalization rates in March or April. Worried doctors urged preventative measures beyond those that were already in place – a 6 pm nationwide curfew and the, closure of all restaurants and many businesses.

The nation-wide infection rate has now doubled over the past three weeks and Paris hospitals are bracing for what could be their worst battle yet, with ICU overcrowding forecast to surpass what happened when the pandemic first crashed over Europe.

While other European countries imposed their third lockdowns in recent months, Macron said that “by refusing to do so in France, we gained precious days of liberty and weeks of schooling for our children and we allowed hundreds of thousands of workers to keep their heads above water.”

Week after week, the government refused to impose a new lockdown citing France’s stable infection and hospitalization rates and hoping that they would stay that way. Ministers stressed the importance of keeping the economy afloat and protecting the mental health of a populace worn down by a year of uncertainty.

Macron last week defended his decision not to confine the country on January 29, a moment epidemiologists say could have been a turning point in France’s battle to prevent surge No. 3. “There won’t be a mea culpa from me. I don’t have remorse and won’t acknowledge failure”, he said.

France’s prime minister Jean Castix on Thursday defended the new nation-wide measures to combat a resurgent coronavirus in France that include closing schools for at least three weeks and putting in place a month-long domestic travel ban and said the government has acted “consistently and pragmatically.”

The National Assembly, France’s lower house, is voting on the new measures Thursday morning, which is expected to be marked by a massive boycott by opposition parties. Jean-Luc Melenchon of the leftist La France Insoumise party denounced the vote as a “bad April fool’s.” He has dismissed the measures as being half-baked, and urged Macron to increase vaccine supplies and adopt a more effective vaccine strategy.

In the southern Paris suburb of Antony, faced with a surge in COVID cases, parents and teachers mostly welcomed announcements that schools were to close on Friday for three weeks, earlier than the scheduled Easter break.

Some headteachers welcomed the plans, saying the virus had put too many strains on staffing.

The French government has announced there will be help for the poorest families to cope financially, amid high or impossible childcare costs. Prime Minister Jean Castex confirmed aid for “modest families whose children will no longer go to the canteen or will no longer be able to enjoy free breakfasts.”

It was the first European government to collapse due to its handling of the pandemic but the move kept the same four-party coalition in power and avoided the possibility of an early election. The crisis erupted when a secret deal came to light a month ago involving Slovakia’s agreement to acquire 2 million doses of Russia’s Sputnik V COVID-19 vaccine. The populist prime minister orchestrated the deal despite disagreement among his coalition partners.

Newly installed Prime Minister Eduard Heger, front centre, poses with members of the new government, during a photocall in front of the office of the prime minister in Bratislava, Slovakia, on Thursday April 1, 2021. (Jaroslav Novak/TASR via AP)

The crisis paralyzed the government in one of the hardest-hit European Union countries. The nation of 54 million has registered 9790 deaths.

Heger, who is a close ally of Matovic and deputy head of his Ordinary People party served as the finance minister and deputy prime minister in the previous government. Matovic is assuming those posts in the new government. Besides that swap, the government has a new health minister and no immediate labor and social affairs minister who is expected to be appointed later. The rest remains the same.

Ban on nighttime gatherings in Berlin from Friday

Germany’s capital Berlin is set to impose a nighttime ban on gatherings from Friday and a reduction in children at nursery from next week try to stop a third wave of the coronavirus pandemic, media reported on Thursday.

People line up in front of the vaccination center at the Arena Treptow in Berlin, Germany, Wednesday, March 31, 2021. This vaccination center in the German capital’s Treptow district has used only the Pfizer vaccine against the COVID-19 disease since it was opened. (AP Photo/Markus Schreiber)

Under proposals the Berlin city government was set to announce shortly, newspapers said, people would only be allowed to be outside on their own or with one other person from 9 pm until 5 am, though children under 14 are exempted. From next Tuesday, people would only be allowed to meet indoors with one person from outside their household, compared with the current limit of five people from two households.

This will be the first limited curfew imposed in Berlin since the pandemic began a year ago.

Europe’s rollout of vaccinations against COVID-19 is “unacceptably slow,” the World Health Organization’s European head said on Thursday, raising concern that delays in giving shots could prolong the pandemic as cases of variants spread.

Only 10% of the region’s population have received one vaccine dose, and 4% have completed a full course, Hans Kluge said. “The rollout of these vaccines is unacceptably slow,” he said in a statement. “… We must speed up the process by ramping up manufacturing, reducing barriers to administering vaccines, and using every single vial we have in stock, now.”

Europe was slower than Britain and the United States, not only to order vaccines last year from companies but also in approving them. Even once they were approved by the bloc, rates of vaccinations there have largely trailed behind British and U.S. efforts.

Kluge said new infections in Europe were rising in every age group except those aged over 80, a sign that the vaccinations that have gone to older groups are working but that the stuttering rollout was leaving younger people vulnerable.

“As variants of concern continue to spread and strain on hospitals grows, religious holidays are leading to increased mobility,” the WHO said in its statement. “Speeding up vaccination rollout is crucial.”

Sweden, which has shunned lockdowns throughout the pandemic, registered 8,304 new coronavirus cases on Thursday, health agency statistics showed. The country of 10 million inhabitants registered 33 new deaths, taking the total to 13,498. The deaths registered have occurred over several days and sometimes weeks. Sweden’s death rate per capita is many times higher than that of its Nordic neighbours’ but lower than in several European countries that opted for lockdowns.