Freed, but Not Yet Home: Nigeria’s Abducted Schoolboys Meet President 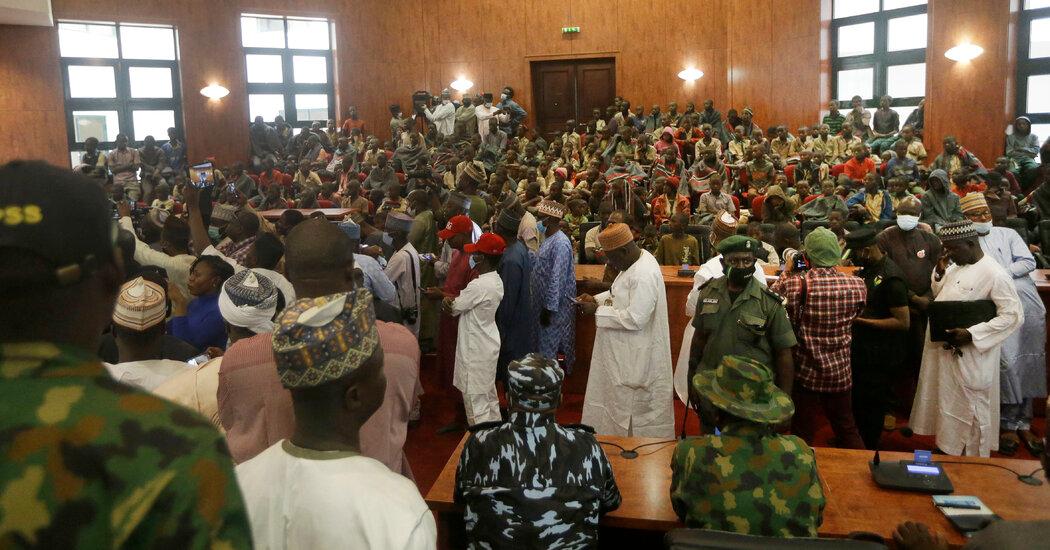 DAKAR, Senegal — Hundreds of boys kidnapped last week from their boarding school in northwest Nigeria were freed on Thursday night after six days in captivity. But they had some public relations to do for the government before they could go home.

Cameras rolled on Friday as they were led barefoot by soldiers carrying rifles and wearing balaclavas through the manicured grounds of the governor’s house in Katsina, 80 miles south of Kankara, the town where they had been studying.

Looking dazed, and still wearing their dusty clothes, they were packed into a conference room, some crouching on the floor, others dwarfed by big leather chairs. Television reporters thrust microphones at them.

Then they were given new clothes to change into and taken to meet Nigeria’s president, Muhammadu Buhari.

“You children are very lucky,” he told them.

Kidnapped by gunmen in a Dec. 11 attack on the Government Science Secondary School in Kankara, a town in the country’s northwest, the students had been through a terrifying, exhausting ordeal.

The kidnappers beat them, marched them for days through thickets and gave them very little to eat and drink, they told local journalists. They were petrified by military jets circling overhead.

Boko Haram, the Islamist group that has terrorized Nigeria’s northeast, had claimed to be behind the Kankara mass abduction, raising the worrying prospect that their reach had expanded far beyond their home territory. Though hundreds of miles away, the attack last week bore a striking resemblance to the mass kidnappings of schoolgirls carried out by the group in Chibok in 2014 and Dapchi in 2018.

One Kankara student was even forced to record a video message saying that they were being held by “a gang of Abu Shekau” — referring to Boko Haram’s longtime leader.

But the government and many of the parents described the kidnappers not as terrorists but as “bandits,” the local term for gangs of criminals that stage frequent attacks in the country’s northwest.

And on Friday, so did the boy who had in the video, under duress, described the kidnappers as Boko Haram members.

“Sincerely speaking, they are not Boko Haram,” the boy, identified by a family member as Sani Abdulhamid, told a Nigerian television channel after the release, looking shaken and distracted in a roomful of his classmates as reporters and officials jostled him.

He said that each day they were fed only once, and given water twice, but they were constantly beaten. He said gang members beat some of the smallest boys with big guns. “Tiny, tiny boys,” he said, shaking his head. “I don’t know how to explain.”

Kidnapping is a growing concern in Nigeria, where gang violence, armed robbery, terrorism and piracy are rife. More than $18 million was paid out to kidnappers between 2011 and 2020, according to a report by the Nigerian consulting firm SB Morgen, which said that kidnap for ransom had accelerated sharply in the past four years.

And kidnappers no longer target just the rich. Poor villagers are increasingly kidnapped, too, with ransoms ranging between $1,000 and $150,000. Mass kidnappings are most common in the north, where the number of victims killed per incident is also much higher.

As the West African country’s overstretched, underpaid and often abusive police force has failed to protect many of its citizens, gangs have increasingly been able to operate unchecked. And vigilante groups have formed to protect communities, often exacerbating tension and leading to even greater insecurity.

The government maintains that it is tackling this.

“Our children should not have to go to school in trepidation,” said Nigeria’s minister of information, Lai Mohammed, at a news conference on Friday in Abuja, the capital. “And we will not relent until all Nigerians can go to bed at night with their two eyes closed.”

Residents of Kankara, and the country’s entire northwest, likely have more sleepless nights ahead, however. Conflict over land and grazing rights, fueled by arms flowing across borders, has caused death, disability and displacement there in recent years.

But for the schoolboys’ parents, their release is a welcome reprieve.

Many of the parents did not answer calls on Friday evening. Desperate to see their sons, they had rushed to Government House, the governor’s official residence in Katsina, where the boys were being marshaled from one photo op to the next.

But Abdulkadir Musbau, whose 12-year-old son, Abdullahi, was among the children taken, picked up the phone. He had not been allowed to see his son, he said. That had to wait until the president was finished talking to them, and until medical checks had been done. But he had been given a few minutes with Abdullahi on the phone.