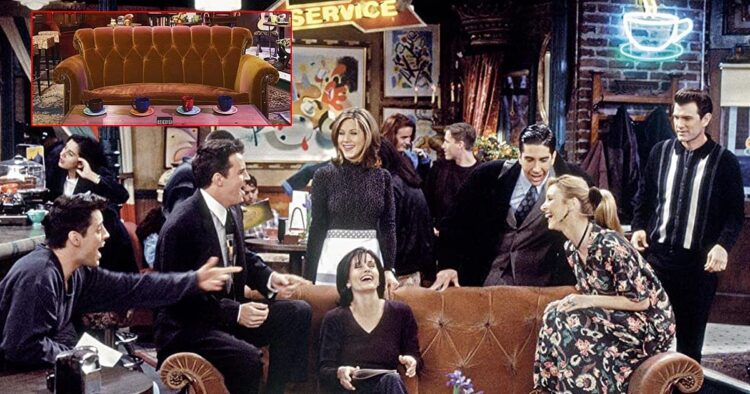 The coffeehouse, which is located just 97 steps from Joey and Chandler’s apartment, is so familiar to fans of the show it’s like another cast member. And the orange coloured couch has become so iconic that it was put in the Empire State Building. But where did the couch come from?

Interestingly, the Orange coloured couch was found not at a thrift store or at swap meat but at the basement storage area at the Warner Bros. studio in Burbank, California. During a conversation with USA Today, Dravid Crane said, “Literally in the back corner, shoved under another piece, was this sofa with beautifully carved wood.”

Set decorator of FRIENDS Greg Grande, who found the couch, thought that it was perfect for Central Perk, as he took design inspiration from the Insomnia Cafe in West Hollywood. However, the first rehearsal for the show’s pilot episode drew criticism.

Grande said to the publication, “I remember explicitly, there were network and studio notes because there was a rip in the back of the sofa and it was a little tattered on the arms. I had to redo some of the fringes. The compromise was for me to take a piece of tapestry throw and cover the biggest rip.”

After the series picked up and began its historic 10-season, 236-episode run, Greg Grande found the same fabric in Europe and reupholstered the sofa. A piece of plywood was placed under the cushion to keep actors sinking into it too deeply.

So what do you think about the history behind the iconic orange coloured couch from FREINDS? Let us know in the comments.

Must Read: Matthew Lewis Is Frustrated To Be Known As Harry Potter’s Neville Longbottom: “I Have Done Things That Have Been So Wildly Different”