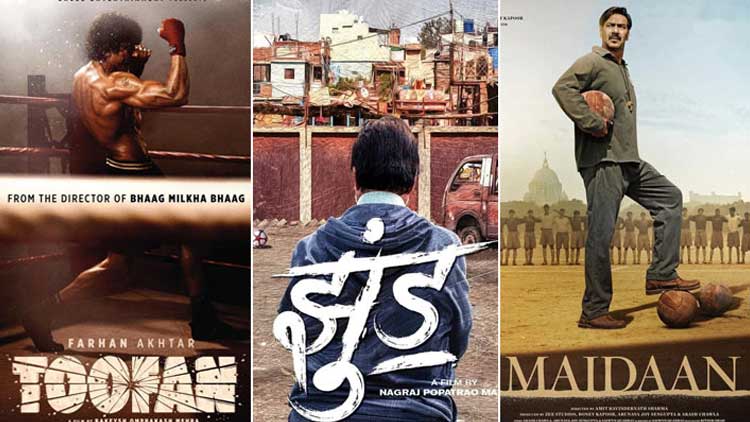 The Ranveer Singh-starrer 83, based on India’s first-ever cricket World Cup victory in 1983, is being billed as one of the biggest releases of this year, as Bollywood business tries to carefully return to normalcy and not surprisingly so. India is a cricket-crazy nation, and when one of Bollywood’s reigning superstars plays Kapil Dev in a film about the country’s first great moment of honor in the sport, it is bound to trigger passion.

Kabir Khan’s 83 is not the only Bollywood film lined up based on a cricket theme. There is Shabaash Mithu, starring Taapsee Pannu as Mithali Raj, captain of the Indian women’s team, besides the Shahid Kapoor-starrer Jersey.

What is notable is films based on non-cricket sports, which are gradually being attempted in Bollywood, continue to rise in numbers this year, too. Over the next months, Bollywood stars will engage in football, badminton, athletics, boxing, snooker and chess, too, as Hindi films tackle subjects around these sports, to cater to varying tastes.

Here’s a look at Bollywood’s sports roster in the months ahead:

The anticipated period sports drama starring Ajay Devgn is inspired by the true story of Indian football coach Syed Abdul Rahim. He was the coach and manager of the Indian national team from 1950 till his death in 1963. Major portions of the film have been shot across Lucknow, Kolkata and Mumbai. Shoot is expected to wrap up by April 2021 and Maidaan is slated to hit theatres on October 15. The film directed by Amit Ravindernath Sharma also features Priyamani, Gajraj Rao and Rudranil Ghosh.

Taapsee Pannu will be seen in a never-before avatar of a runner in this sports drama. The actress recently finished shooting for the Jharkhand schedule of the film which narrates the journey of an athlete. Taapsee, who has just commenced shooting for the final schedule, has shared on social media how she had to undergo rigorous athletic training for the role which even led to pain and inflammation in her muscles. Priyanshu Painyuli plays Taapsee’s husband in the Akarsh Khurana directorial.

Amitabh Bachchan will essay a role based on Slum Soccer founder Vijay Barse in this upcoming sports drama. The film narrates the story of a professor who encourages street children to build a football team, in order to help them find a purpose in life. The film is directed by Sairat maker Nagraj Manjule.

Parineeti Chopra reprises Badminton star Saina Nehwal in the biopic helmed by Amol Gupte. Manav Kaul essays the role of Nehwal’s coach Pullela Gopichand in the sports drama, which also features Paresh Rawal. The film had originally cast Shraddha Kapoor as Saina, before Parineeti took over as the champion shuttler.

Farhan Akhtar collaborates with director Rakeysh Omprakash Mehra for a new sports drama after the 2013 hit film Bhaag Milkha Bhaag, which showed him as Indian sprinter Milkha Singh. In Toofan, Farhan will be seen in the avatar of a boxer and has bulked up for the role. Paresh Rawal, Mrunal Thakur and Isha Talwar are also a part of the cast.

Sanjay Dutt features in this just-announced film which will showcase the journey of a snooker champion. Written and directed by Mridul, Toolsidas Junior stars child actor Varun Buddhadev and Rajiv Kapoor alongside Dutt. The poster of the film describes it as an “exciting and inspiring sports drama” and also heightens curiousity of the viewers with the tagline: “Bachcha hai, phaad dega”.

Aanand L. Rai’s yet-untitled film was announced just a month ago, and will narrate the journey of Indian chess grandmaster Viswanathan Anand. Speculative reports suggest that Tamil star Dhanush might play the chess grandmaster in his biopic, but no official announcement has been made on the same as yet.

Then there are cricket films, of course:

The big-ticket Ranveer Singh-starrer is one of the most talked-about films of the year, and is slated to hit theatres in the first quarter of this year. The Kabir Khan directorial narrates the historical journey of India’s first-ever cricket World Cup win under the captaincy of Kapil Dev. In the film, Ranveer essays Kapil Dev while Deepika Padukone plays Kapil’s wife Romi Dev. The film also stars Pankaj Tripathi, Saqib Saleem, Tahir Raj Bhasin, Harrdy Sandhu, Ammy Virk, Jiiva, Sahil Khattar, Chirag Patil and Adinath Kothare in key roles.

Taapsee Pannu steps into the shoes of the former captain of the Indian women’s cricket team Mithali Raj in the biopic. Shabaash Mithu is helmed by Raees director Rahul Dholakia. Taapsee will reportedly undergo a three-month cricket training for the film, which is scheduled to go on floors soon.

Shahid Kapoor has been tempting his fans for quite some time now by sharing photos on social media of his preparation for his role of a cricketer in the upcoming sports drama. The film, which is the Hindi remake of a Telugu hit film of the same name, narrates the tale of a talented but failed cricketer, who decides to try making a comeback in his late thirties for the sake of his son and play for India. The Gowtam Tinnanuri directorial also stars Mrunal Thakur.