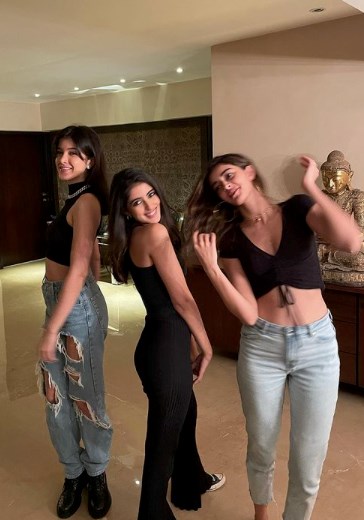 Friday Nights are meant to be enjoyed and have fun! And what better way to spend some time with your best friends. Ananya Panday, Shanaya Kapoor and Navya Naveli Nanda surely know how to have a perfect start to the weekend. The three were seen having some real fun together last night at Shanaya’s house.

Shanaya Kapoor shared their photos and wrote,”my kinda crazy ” In the photos we can see three of them dancing, enjoying and just having fun. Also looks like, it was a colour coordinated party as all three of them can be seen in black outfits.

Shanaya is all set to make her bollywood debut soon with Dharma Productions. The details of her debut film have not been disclosed but she is going to start shooting for the same this month.

While, Navya has chosen to stay away from the films. She is the co-founder of an online healthcare platform for women. She has also founded a non-profit organisation that supports gender equality in India.

Whereas, Ananya will next be seen alongside Vijay Devarkonda in Puri Jagannadh’s film ‘Liger’ .  The film has been shot simultaneously  in Hindi and Telugu both and is all set to be released on 9 September,2021

She will also be seen in Shakun Batra’s next untitled film which also stars Deepika Padukone and Siddhant Chaturvedi alongside her.