Home News Fungal infection triggered by COVID-19 seen in cities all over India: All you need to know- Technology News, Firstpost

Fungal infection triggered by COVID-19 seen in cities all over India: All you need to know- Technology News, Firstpost 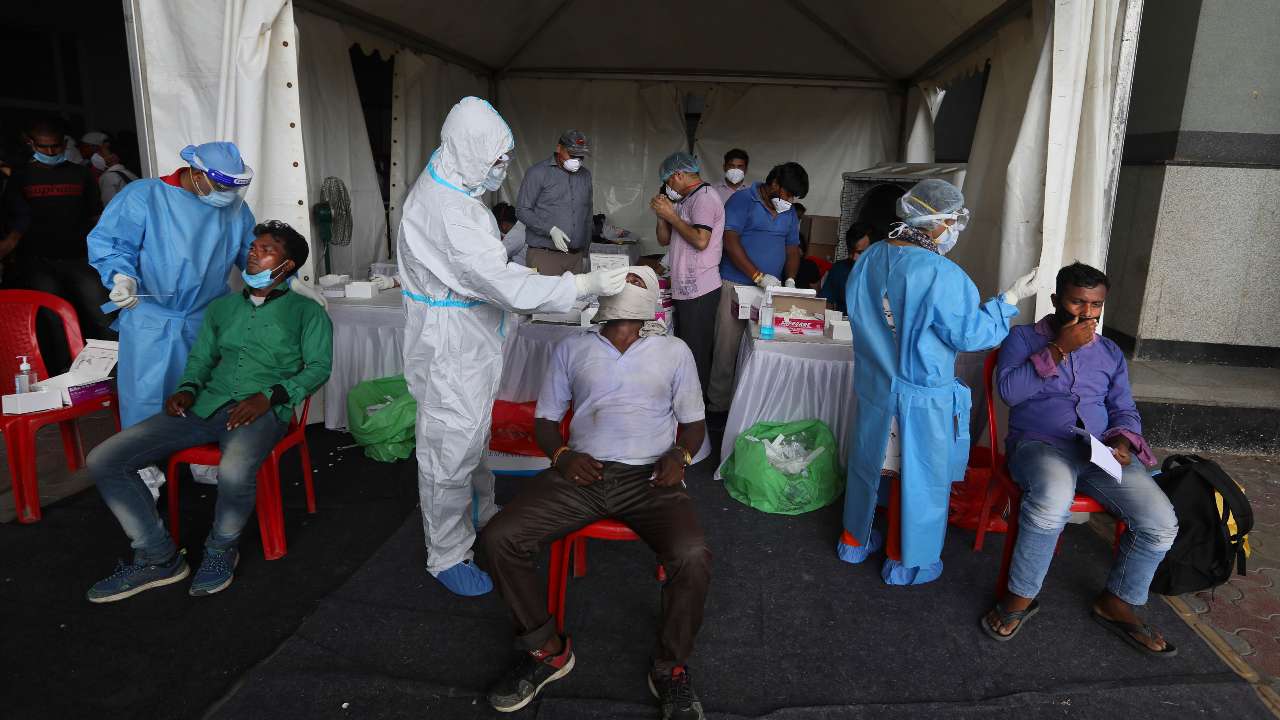 A Delhi hospital has reported around 13 cases of a fungal infection in patients that is triggered by COVID-19. Doctors from Sri Ganga Ram Hospital (SGRH), Delhi has said the infection has caused the loss of eyesight, removal of the nose and jaw bone and five people have died due to this infection. The black fungus infection has been identified as Mucormycosis that occurs when you have a weakened immunity due to illness or health condition, which happens when one tests positive for Covid-19.

Dr Manish Munjal, Senior ENT surgeon at SGRH told PTI, “The frequency with which we are witnessing the occurrence of COVID-19 triggered Mucormycosis with high morbidity and mortality is alarming.”

“Early clinical suspicion on symptoms such as nose obstruction, swelling in the eye or cheeks, and black dry crusts in the nose should immediately prompt a biopsy and start of the antifungal therapy as early as possible,” he added.

However, this is not the first time that reports of COVID-19 triggering Mucormycosis has surfaced. Times of India reported Ahmedabad has also reported cases of the infection and they are commonly seen in Covid-19 recovered patients with co-morbidities such as diabetes, or kidney/heart disease or cancer.

India Today reported that the city had registered at least 44 cases of Mucormycosis, out of which nine patients have died.

“We have recorded 20 percent mortality (deaths of nine out of 46 patients) in the Mucormycosis infection so far. However, timely intervention can prevent complications,” Dr Devang Gupta, ENT surgeon at Civil Hospital, Ahmedabad told TOI. “In the past 18 years, I have seen about 20-odd cases of the infection. But in the past nine months, we have seen 46 such instances. Mostly the patients are with lower immunity after recovery from Covid-19.”

Similarly, SGRH saw five cases of the infection in one year but due to COVID-19, they are seeing bigger clusters of the fungal infection.

Firstpost spoke to Dr Mala V Kaneria, infectious diseases consultant at Jaslok Hospital and Research Centre, Mumbai who said that she has seen three cases of this fungal infection in Mumbai as well.

During a press conference, Dr VK Paul, NITI Aayog said, “This is a devastating disease, and the cure is not easy. We need to be cautious. This could be a mild disease but can also take a serious turn. This was there in the absence of Covid-19 as well.”

This is a devastating disease. We need to be cautious. This could be a mild disease but can take a serious turn: Dr VK Paul, Member (Health), NITI Aayog on being asked on “reports of fungal infection at Ganga Ram Hospital that is leading to patients losing eyesight” pic.twitter.com/p4A1j0aUEb

“According to experts, there has been an increased risk of Mucormycosis disease among people who have recovered from Kovid-19, which has led to many deaths. In this disease, there is a risk of damage to many organs of the body including the brain. An alert for the disease has been issued in Mumbai and Ahmedabad,” the Rajasthan CM said in a tweet.

MK- Mucormycosis is an uncommon infection, which is caused by mold from the family called Mucorales. This fungus is present everywhere – in the atmosphere, ecosystem, soil, etc. The infection occurs mostly by inhalation where it enters the sinuses and the lungs or it can enter the body if a person has a burn, cut or abrasion on the skin. This fungal infection has always been around but has gained a lot attention because of COVID-19. While fungal spores are present everywhere, immuno-competent patients (a person who has a healthy immune system) are not affected by them.

However, people who are immunocompromised (their immunity is suppressed or not all that great) for example, people with a condition called neutropenia – which means the patient has a low WBC count, an HIV or cancer patient or a patient who’s on immunosuppression steroids, especially if someone has uncontrolled diabetes mellitus are most at risk with this fungal infection. If any of the above-mentioned patients inhale the fungal spores and ingest it, they can have a very lethal and life-threatening infection because what is unique about this fungus is that it is very Angioinvasive. (Angioinvasive means that it is a predilection or preference for the blood vessels.) And once it affects the blood vessels, it causes necrosis of the tissue and the blood supply does not reach the tissues. After which the patient can have an aggressive infection, for which they would require treatment with an anti-fungal and/or surgical debridement which can give rise to loss of tissue or an organ and also has a high mortality rate.

How does this fungal infection relate to COVID-19?

MK- The correlation between COVID-19 and Mucormycosis is not surprising at all. Because the major risk factor for Mucormycosis, as I mentioned before, is uncontrolled diabetes mellitus which is also a high-risk factor for COVID-19. Secondly, steroids – which are known to suppress immunity – are the only of treatment which has shown to decrease COVID-19 mortality.

So it is the combination of COVID-19, with decreased immunity and the steroids which probably predispose a patient to Mucormycosis.

Would you say that a person who was A) severely infected with COVID and B) treated with steroids is most likely to be infected by these?

MK- Yeah, it is more likely because of both of these risk factors. However, I have also seen patients who have come with uncontrolled diabetes and Mucormycosis and who have been incidentally diagnosed as COVID-19 without receiving steroids.

What are the treatments for this fungal infection?

MK- First of all, one has to be quick to diagnose and treat the patient, as I mentioned before, it can be very aggressive and life-threatening. It affects the sinus, the eyes and can even move to the brain which is called as rhino-orbito-cerebral Mucormycosis (ROCM). If it affects the eye, the patient may have to get evisceration done (disembowelment of the eye) in spite of treatment.

For treatment, a patient is given a combination therapy in the form of antifungal and cerebral and surgical debridement but it needs to be given quickly.

The antifungals used to treat Mucormycosis is Amphotericin B – which is available in the conventional form and also in the liposomal form which is less nephrotoxic. (Nephrotoxicity occurs when the body is exposed to a drug/toxin that causes damage to your kidneys.) The other two antifungals are posaconazole and isavuconazole, but the mainstay for therapy is amphotericin B.

Some reports mention that the cost of treatment is around three to four lakhs or even can go higher. Is this because the patient needs surgery or because of the medication itself?

MK- Since conventional amphotericin B is not used very commonly, one has to use liposomal amphotericin B and the dose is almost three to five milligram per kilogram per day. The cost of one day therapy can be almost Rs 10,000. The other antifungals which I mentioned are much costlier, isavuconazole capsules can cost Rs 43,000.

Also, the antifungal treatment is required for Mucormycosis can last for weeks and sometimes even months, not just days, So when you add it up, even without surgery, it turns out to be pretty costly.

What are the signs and symptoms of Mucormycosis?

MK- Mucor is usually inhaled or comes through the skin so it usually starts as fungal sinusitis which can exhibit signs like a runny nose or blackish or bloody discharge from on the nose.

If it spreads to the eye, the person could have unilateral or one-sided swelling of the eye, called proptosis.

Some other forms include pulmonary Mucormycosis, where they show pulmonary symptoms or Gastrointestinal Mucormycosis which is not common. But what we most commonly see is ROCM.

But one important thing is that mucor is not spread from person to person, it is not contagious.

What are some precautions that people can take?

MK- The first and foremost thing to do is to keep the underlying condition, which makes a person prone to being infected, under controlled. Secondly, patients who are immunosuppressed should wear a mask, preferably an N95, because these spores are all around us. When they’re doing an activity like gardening or they’re touching the soil, they use gloves or long sleeves clothes, so that the spores don’t enter the body somehow. Thirdly, if a person is on steroids, the dosage of steroids should be decreased.