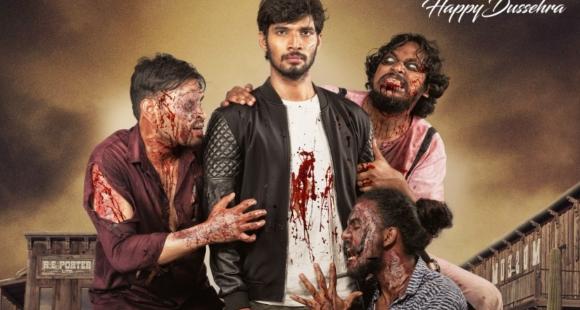 G-Zombie Movie Review: The film starring Aryan Gowra, Divya Pandey and others has released. Here’s our take on the film. “G-Zombie’ poses an age-old philosophical question right in the initial scenes: Can one sinner be sacrificed if it leads to a greater good? A scientist puts this question to a DGP-friend, who predictably tells him that it’s legitimate. While this sounds like a thought-provoking question, the way it so blandly plays out in the latest Telugu-language release is threateningly indicative of the ensuing insufferable zombie drama.

A group of youngsters, led by medical researcher Sara (Divya Pandey), head to an uninhabited college building to conduct a human trial. They have to test the efficacy of an immunity-boosting drug on a rapist who has been sentenced to death. Knowing the title of the movie, you can see how the experiment is going to fail spectacularly, resulting in complete mayhem. It’s up to Rudra (Aryan Gowra) to save himself and the others he has accompanied to the lonely place.

To be fair to the writers, they have come up with a decent enough idea – a zombie film set on a college campus. But what is constructed on this foundation is a slew of sapless ‘scare’ scenes that are both listless and comprehensively abortive.

Character after bland character (with no arc or dignity whatsoever) turn into killer machines without making us feel anything for them or for the individuals who might be staring at the unthinkable. We, in fact, start regretting that they are able to escape the fate of officially becoming zombies.

The female protagonist doesn’t behave like a scientist who has been into developing a game-changing scientific invention. And her boyfriend is so awful (he spends most of his time insulting a dark-skinned sidekick, calling him a ‘karri yadhava’ to the point of us wanting to complain to Rihanna) that her experiment turning life-threatening looks less disastrous in comparison.

Like in the typical commercial film, there are slow-motion shots (Arya gets quite a few intro/re-intro scenes, leaving us rooting for the zombies). But such a hero, for a good part of the story, doesn’t even look concerned, much less sharp-witted enough, about others’ lives in the haunted building.

The very explanation for why the human trial needs to be conducted in secrecy like it is done by criminal scientists, reeks of a kindergarten-level logic. It is as if the film wants us to think that Sara knows pretty well that her experiment will be a flop.

Characters, including the prima donna, look eerily disinterested as they conduct their potentially life-altering experiment. We get a sense that the rapist is being used as a guinea pig at the earliest. At least this element should have been kept suspenseful till the first 25-30 minutes.

The film invests more in elevating the male lead than in showing the very many zombies, whose ways look not only done-to-death but also painfully repetitive. Somewhere, the hero says that he is not just a doctor but also a fighter. But for that dialogue, the audience wouldn’t even have known that he is a doctor and what he is doing in the so-called action scenes is fighting! Enough said.